The governor's plan would make it the responsibility of community colleges. Providers think the plan unrealistic; students fear being out of their comfort zone. 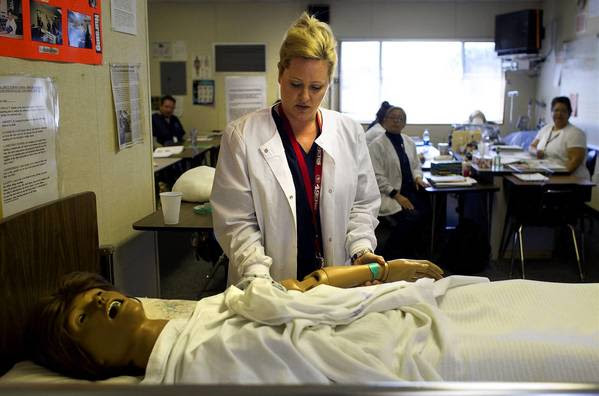 March 16, 2013, 7:15 p.m.  ::  Areli Morris was frustrated that her poor English prevented her from helping her daughter in preschool. And she was embarrassed when the 4-year-old began correcting her pronunciation.

Morris, who is from El Salvador, has vastly improved her language skills since she began attending Azusa Adult School. For nearly 60 years the campus has served as a community resource for those, like Morris, who needed English classes, dropouts seeking high school diplomas, immigrants taking citizenship classes and those pursuing career and technical training.

But this semester may be the last for the Glendora campus; the Azusa school board voted to end the program in June. It is a casualty of continuing budget problems that have affected every level of education in the state. And its students' lives are likely to be jolted by a proposed restructuring of adult programs.

Adult schools operated by K-12 districts have historically provided the majority of classes for this group of students even as the state's 112 community colleges have increased their basic-skills offerings.

Gov. Jerry Brown's budget proposal shifts all responsibility for adult schools to community colleges. Under that plan, adult programs would be funded with a new grant of about $300 million in the 2013-14 budget.

But the governor's approach is causing great concern among many adult-education providers and college administrators and angst among many students who fear losing convenient access and affordability.

"Community college is more complicated," said Morris, 30. "There are too many rules and parking and other costs I can't afford to pay. The adult school is in the neighborhood. Nobody wants it to close."

School districts from Oakland to Long Beach say they intend to cut their adult programs or severely curtail them. The Los Angeles Unified School District cut its adult program by about 75% in the last two years, but Supt. John Deasy has recommended maintaining the current $100 million budget next year, said Michael Romero, executive director of district's division of adult and career education.

But the financially troubled Inglewood Unified School District — which is overseen by a state-appointed administrator — approved a plan last week to cut most of its adult program.

The crisis in adult education accelerated in 2008-09 when the Legislature gave school districts temporary flexibility to shift funds earmarked for those courses to other uses.

A 2012 Little Hoover Commission report found that overall enrollment in adult-school programs fell by a third, from about 1.2 million students to nearly 777,000, from 2006 to 2010, largely due to the change in funding.

In 2007-08, a high of $750 million was earmarked for adult programs. Under the governor's plan, the $300 million in funding would be used for core programs such as vocational education, English as a Second Language, basic skills and citizenship. For other classes, students would be required to pay the full cost of instruction.

Community colleges would be able to contract with K-12 districts to continue to offer adult programs. And school districts could still choose to fund their own adult programs. Such a realignment would be more efficient and require cooperation, officials said.

"Right now it's a bifurcated system," said H.D. Palmer, a spokesman for the state Department of Finance. "But adult education is one of the core missions for community colleges. We don't believe that by proposing this structure the fears are going to be realized."

The plan must still be approved by the Legislature.

Some adult-education providers believe they are being led over a cliff.

"Embedded in the proposal is the idea that adult schools are dysfunctional and doing a bad job when in fact, we're doing fine," said Karen Arthur, who teaches English as a Second Language at the Oxnard Adult School. She created the Alliance for California Adult Schools to oppose Brown's consolidation plan and support the return of a dedicated funding stream for K-12 adult programs.

"Adult schools are the sacrificial lambs, but when immigration reform comes through, people are going to need our programs," she said.

The proposed shift would take effect this fall, and many colleges may not be ready, officials said.

"Our overriding concern is that we have this enormous program that impacts the lives of thousands and thousands of Californians and we frankly are worried about trying to pull off something of this magnitude between now and July," said community colleges Chancellor Brice Harris. "We've been trying to find a way to have a meaningful and careful conversation, to transition this in a reasonable period of time. It puts K-12 and us in an awkward spot. We need clarity on what the funding will be and what responsibilities are expected."

The lack of details has put many colleges in limbo.

Citrus College in Glendora offers both credit and non-credit vocational and basic skills adult courses but has no specific plan for students who had been attending the Azusa Adult School.

"We've been able to add some classes for this spring that has helped us to alleviate the previous crush," said Jim Lancaster, dean of curriculum and continuing education. "But can we absorb the 1,500 from Azusa? At this time I'd say we don't have the capacity."

Mary Ketza, director of the Azusa Adult School, fears that many of her students will feel intimidated by the environment and negotiating enrollment at a college campus.

"Here, it's convenient, classes are at a time of day or evening that's workable for them," said Ketza. "I don't know what the alternative is going to be."

The program shrank to 1,500 students from 8,000 just a few years ago, due to budget cuts. There are waiting lists for high school diploma and English classes, among others. Students in most programs pay a $50 registration fee; some career certificate programs cost up to $1,000.

Gabriela Medina attended Citrus College but was unable to get the classes she needed to transfer or the prerequisites needed for the nursing program. She learned about the Azusa Adult School and is on track to obtain a certified nursing assistant certificate and eligibility for licensing after only one year.

"I felt I was throwing my money away in college," said Medina, 20. "This school has provided the best opportunity."

smf - re: the headline, readers may include 4LAKids+smf in the collective “Some…”.