THE WRONG FIGHT OVER SCHOOLS: Wasting money on a school board election

Op-Ed in the LA Times by By Charles Taylor Kerchner | http://lat.ms/Yoeo0G 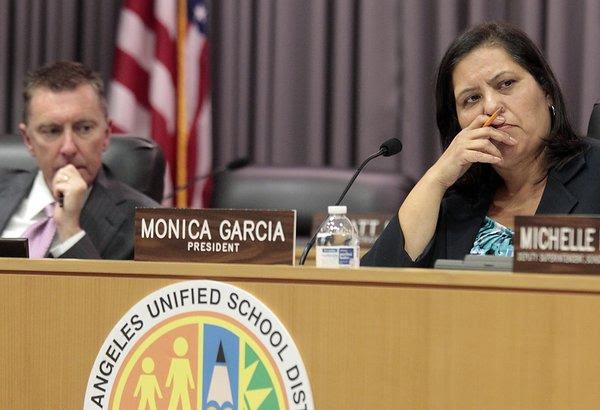 March 11, 2013  ::  Over the last century, American public education was built on an assumption that it would be apolitical. School districts would not be dragged into the mire of city elections. School board members would remain above the partisan fight. Candidates would be drawn from respected local elites, sufficiently known so that large, expensive elections would hardly be necessary. Once elected, they would hand over operating responsibility to an appointed superintendent and forswear the sin of micromanagement.

As last week's election showed, that picture of leadership doesn't apply to the Los Angeles Unified School District, and it hasn't for at least 40 years. This election, like those that preceded it, was a contest between interest groups. It varied from the past only in the obscenity of its funding. The coalition headed by Mayor Antonio Villaraigosa spent about $3.9 million on three candidates whose combined vote totaled about 60,000. That's $65 a vote. Compare that with the $16.73 a vote that the Obama campaign and its supporting political action committees spent on the 2012 presidential election.

Education interest groups, however, are here to stay. The moneyed coalitions can't make the union go away. Try as it might, the union can't exclude civic elites. What was tragic in this election was that the money was focused on the wrong things and at the wrong level of government.

The historical reality is that the L.A. school board is largely impotent to solve fundamental educational problems. The story of the last half-century is one of financial and educational authority being removed from local school districts. The board can't raise taxes anymore; that's done in Sacramento. It can't set consequential standards; those are being created by testing experts writing the examinations for the nation's common core standards and by the universities that set entrance requirements. It can't even develop its own curriculum; huge publishing companies now write and market textbooks, teacher manuals and professional development programs. The capacity of the school district to carry out these core functions has been effectively hollowed out.

So, rather than focusing on the school board election and the preservation of a superintendency, the coalition and the union should have attended to building a new education system in Sacramento and Washington, where the money and power reside. The politics of education need to shift from who controls governance to building the system's capacity.

Instead of upping the ante in three school board races, the coalition should have been helping lobby the Legislature and the governor to pass school finance reform and a pension rescue scheme that L.A. and the rest of the state badly need if schools hope to gain fiscal solvency. Without these measures, the L.A. school board will continue to live in a state of permanent crisis, in which reform ideas are swamped by one fiscal cliff after another.

Instead of spending their money on negative campaign fliers, the coalition and the union should have been helping California design and build a digital infrastructure that would make learning and guidance available to every student on demand. They could begin by focusing on the parts of public schooling that are the most challenging and expensive: gaining English fluency rapidly, advancing the pace of learning for students with special needs and helping students make the transition from high school to higher education.

Instead of deciding that it wanted to take on unions, the coalition (with or without the union) should have created a Democratic alternative to the Republican playbook of making unions small and weak. Democrats, including those who contributed to the coalition, have yet to figure out that they can legislate a different kind of labor relations.

Teacher unions in California do exactly what the law tells them they should do: They represent the economic and income security interests of their members. What if labor law were repositioned, not to disenfranchise teachers but to require unions to negotiate a robust teacher evaluation system? No evaluation system? Then no contract, no wage increases, no automatic raises based on education and experience.

Such an addition to statute would be radical. Rather than limit the scope of bargaining, as many Republicans advocate, it would expand it but require unions to be tough-minded about evaluation. Unions would get a seat at the table in defining teacher quality, as their craft union heritage suggests they should. The public would get unions that represented the occupation of teaching as well as teachers.

None of these ideas was on the table last week in an election that was not so much about big outside money as it was about big missed opportunity.

>>Charles Taylor Kerchner is a professor at Claremont Graduate University and co-author of "Learning from L.A.: Institutional Change in American Public Education." He blogs at http://www.mindworkers.com