March 15, 2013  ::  In September, I was talking about pension reform on my now-defunct weekly podcast, LA Redux with the LA Times’ David Zahniser, who covers City Hall (and is in my opinion one of the best reporters in Los Angeles). 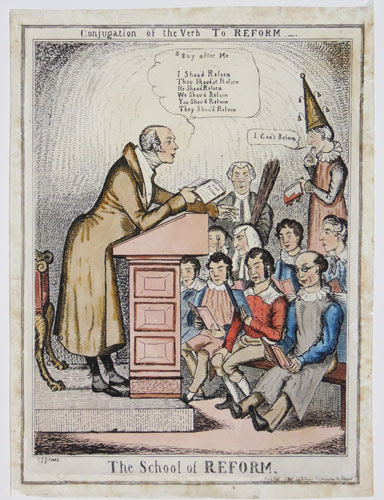 Zahniser said that he hardly ever uses the word ‘reform,’ in his stories, although editors sometimes ad (sic) it in.

“‘Reform’ is just one person’s promotional catchphrase,” he said.

<<The School of Reform. Conjugation of the Verb to Reform.
by CJGrant.[Pub. Feb. 1831 by S Gans Southampton St. Strand.]

“So what are you calling it?” I asked.

“I would call it pension change,” he said. “Because it’s in the eye of the beholder, first of all. And secondly, you don’t know, for years out, what it turned out to be.”

I wasn’t sure I agreed with Zahniser — pension change doesn’t exactly roll off your tongue —  and I’m not sure I agree now.  But his argument has stuck with me. And of course, nowhere is the question of how to name the various parties and proposals more pertinent than in reporting about education.

Good stories are centered around conflict. That’s the great thing about covering education right now. Public education in Los Angeles and much of the country is consumed by a series of debates between two ideological poles.

In simple form, one side is dominated by the teachers union and their ideological allies, such as Diane Ravitch. The other side, often described as “school reformers,” includes many big city mayors like Michael Bloomberg, Cory Booker and Antonio Villaraigosa, and quite a few rich guys like Eli Broad and Casey Wasserman.

While most of those involved identify themselves as Democrats, the two sides are not dissimilar from political parties: they have their own factions, their own sources of funding, their own ideologies, their own electoral machines and of course, their own vicious attacks on the other side.

When covering national politics, reporters use words like ‘Democrats’ and ‘Republicans’ without controversy. Other words, like ‘liberal,’ used to be controversial, but are now general accepted as useful labels, as are ‘conservative,’ ‘progressive,’ ‘moderate,’ and so on.

But what words should education reporters be using?

It’s a question that has been debated among educators and journalists for a while now, with no clear conclusion.

For the most part, I have been using the word ‘reformers,’ but with some hesitation, and possibly even some guilt. Sometimes, I’ll put quotes around the word ‘reformer’, to suggest a certain amount of distance. Last week, when I was on KCRW, and I found myself using the words, “so-called reformers.” But that didn’t feel quite right either, as if I was suggesting that I didn’t think they were reformers.

When I spoke with LAUSD Superintendent John Deasy last year, he said he didn’t like being called a reformer, because he thought it was divisive.

(Perhaps the solution is to use Reformer with a capital ‘R,’ just to make it clear we’re talking about a specific set of ideas, much like ‘Conservatives’ are distinguished from ‘conservatives’.)

Finding words for the other side can be just as problematic. When the union says something, fine, it’s the union. But what if a like-minded person like Diane Ravitch or LAUSD School Board member Bennett Kayser says something? Is he a “union sympathizer?” Is he “pro-union?” Is he “anti-reform?”

Reporters are often accused of having one bias or another, but more than anything, we just want to be able to write a sentence without agonizing over what words and labels to use for various people in a story. All labels are, by their very nature, reductive. But without them, communication would be next to impossible.

My sense is that the word ‘reformer’ is becoming generally accepted. Both the Daily News‘ Barbara Jones and the LA Times‘ Howard Blume use the word. But what do we call the other side? And what do if the reform ideology becomes entrenched within the public education system, and some new movement from outside seeks to upend it? What will call everybody then?

smf:  There is a tendency among bloggers to argue with oneself. And when that doesn’t work, we argue with each other. I should know better than to argue with Hillel Aron – but he seems to be losing the argument he is having with himself about the substance and semantics of ®eform.

I agree that David Zahniser is one of the best reporters in Los Angeles. Hillel should listen to David on his opinion of the word “Reform” – and not go with the “generally accepted” Howard Blume and Barbara Jones’ definition.

Howard and Barbara are education beat reporters – and fine ones. They contribute stories that generally_acceptably  fit in with the Times and Daily News’ editorial policies

There is little room for nuance, no shades of gray in any beat reporters’ stories …unless they are writing about sports. Zahniser is a long form muckraking reporter who takes time to investigate, develop and write about a story. He writes about the nuance and and the colors and hues of the goodness and badness over time.

The Times+DN ed policy and style book says that ®eform as practiced by the ®eformers is A Good Thing …and resistance-to-and-questioning-of ®eform is Not a Good Thing.

“Resistance is not futile”,  says the graffito scrawled on the CalTech wall. “It’s voltage divided by current.”

“Reform” is just a promotional catchphrase. It’s a brand, a frame; a trademark of the so-called-reformers. And ‘so-called’ is entirely appropriate - for it is they that are ‘so-calling’ themselves that!   Hence;  ®eform, Inc.

(If you look at the engraving above about the Great British Parliamentary Reform of 1832 you will note that little has changed.)

Complicating this is that LA Schools Report is published by Jamie Alter Lynton – a member of the board of The (John Deasy+Megan Chernin) Fund for LA Education …and is edited by Alexander Russo.  Russo – a troublemaker and apple-card upender in all the positive meaning of the words –  spreading discomfort among the comfortable, etc. - is pretty much aligned with the forces we here in 4LAKids call ®eform.