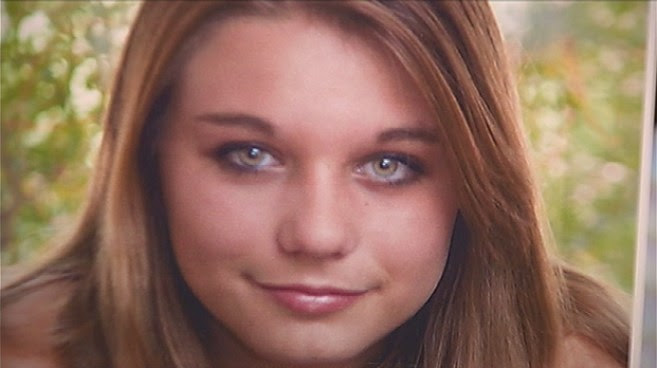 An honor student in Northridge, Aria Doherty had aspirations of becoming a surgeon.

"I'm positive my daughter didn't realize it had the potential to kill her," Carolyn Doherty said.

A straight-A student at Nobel Middle School, Aria Doherty died Monday. She’d been home alone for a couple hours when she inhaled the duster. Her parents believe it was her first time huffing – also known as bagging or dusting.

Her older sister found Aria in bed with a can of compressed air still attached to her mouth, her nostrils taped shut. A plastic bag was found nearby.

"I would give anything to have her back," said Richard Doherty, Aria’s father. "It just took her, like that."

"I just miss her. I wish she was here. It doesn't seem real," he said through tears.

The Doherty’s kept no dangerous weapons in their Porter Ranch home, stored prescription drugs under lock and key, and recently purged their home of all alcohol. They talked to their teen daughters about the dangers of substance abuse.

But authorities said the practice of huffing does not involve the typical chemical culprits. Inhaling household cleaners, paint or glue offers a quick high and they’re accessible.

"Death can happen very quickly. It can happen the first time," said Kezia Miller, a counselor with the Los Angeles Unified School District.

Counselors are available at Nobel Middle School and are planning an inhalant education program for Aria's peers.

"These are substances that are poison," Miller said. "They're toxic and they're being ingested."

Long-term effects of inhalants include damage to the kidney, liver and brain. Short-term dangers include heart problems.

"When you mess with the cardiac system, the electrical system of the heart, you can have a lot of issues, like arrhythmia," said Dr. Michael Lewis, with Northridge Hospital Medical Center.

It’s possible the computer cleaner caused cardiac arrest or the teen asphyxiated. An autopsy is pending.

The Doherty’s said they want their daughter’s death to be a message to other parents to be aware of this developing threat.

"We didn’t know," Carolyn said. "But clearly, the kids do know."

3/20/2013 02:18:57 PM PDT  ::  A dangerous trend known as "huffing," in which teens inhale chemical vapors to get a quick high, has been blamed for the death of a eighth-grade honors student at Northridge's Nobel Charter Middle School, officials said Wednesday.

Aria Doherty, 14, died Monday night of cardiac arrest after inhaling vapors at her home, according to Monica Carazo, a spokeswoman for the Los Angeles Unified School District. The teen was apparently alone at the time.

"She was a jewel of a student," said Derek Horowitz, who described the straight-A student as very sociable and nurturing.

Horowitz spent Wednesday visiting classrooms at the Northridge campus, talking to students them about the dangers of huffing.

A team of grief counselors from Los Angeles Unified also spent the day in the school library, talking to dozens of the school's 2,400 students, a spokeswoman said.

Comments posted on Nobel's Facebook page praised her recent portrayal as the Wicked Witch of the West in the school's production of "The Wizard of Oz." She also performed in "Cat in the Hat" and "Beauty and the Beast. "

The health and safety of children isn’t something to trot out and wave like a flag whenever there’s a crisis – and health education isn’t a quick fix for a tragic news story about a beautiful young life ended too soon.

We don’t save lives by having an awareness week or a school assembly about the dangers of inhalant abuse – we save lives by teaching it in classrooms before the tragedy.

We save lives by talking about life with the living.

We talk about uncomfortable things like sex and birth control and bullying and dating violence and suicide and alcohol and drugs and smoking and depression and sexually transmitted diseases and huffing and bagging and dusting - “the choking game” and “booty bumping”.

Find out about these things with your children. And insist that there be classroom discussions about them between students and health teachers in every middle school and high school in LAUSD,   Including charters and pilots and continuation and options schools. Classes led by qualified credentialed health teachers for graduation credit.

Because health classes are the only classes in school where adolescents discuss their favorite subject: them!

A middle school student in Northridge died this week after huffing a can of computer duster. Aria Doherty, 13, was a straight-A student at Nobel Charter Middle School in Northridge, according to CBS Los Angeles. But on Monday night she huffed from a can of ...

A straight-A student at Nobel Middle School, Aria Doherty died Monday. She'd been home alone for a couple hours when she inhaled the duster. Her parents believe it was her first time huffing – also known as bagging or dusting. Her older sister found Aria in ...

A dangerous trend known as "huffing," in which teens inhale chemical vapors to get a quick high, has been blamed for the death of a eighth-grade honors student at Northridge's Nobel Charter Middle School, officials said Wednesday. Aria Doherty, 14, died ...

Aria Doherty, a straight-A student at Nobel Middle School in Northridge, loved animals and had dreams of becoming a surgeon. Her sister found her dead inside her home Monday night. The girl's parents, Richard and Carolyn, said Aria went into cardiac ...

Aria's school, Alfred B. Nobel Middle School in Northridge, sent a letter home to parents to let them know a student had died, but didn't mention Aria passed away from huffing. The victim's parents decided to speak out about the incident because they don't ...