Action by California credentialing panel seems to settle a debate over the rights of students who speak only limited English, the effectiveness of interns and the flexibility of districts in hiring instructors. 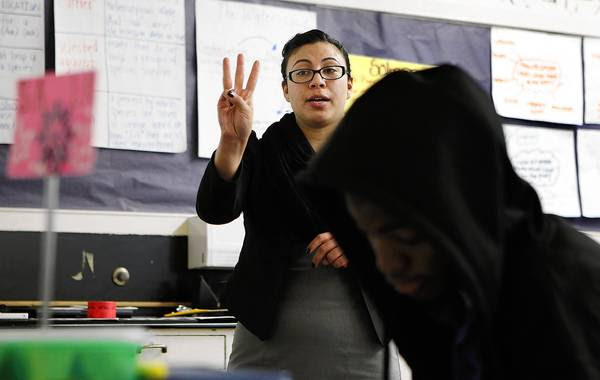 Stephanie Silva is a Teach for America instructor at Manual Arts High School in Los Angeles. Interns like her will be allowed to teach students struggling with English only under stricter state controls over their training and supervision, the state Commission on Teacher Credentialing unanimously decided Thursday. (Christina House / For The Times / March 4, 2013)

March 8, 2013, 5:00 a.m.  ::  Stephanie Silva is just five years older than the Manual Arts High School students she teaches, but she is passionate about making a difference in their lives. The Cal State Northridge political science graduate joined Teach for America last year, underwent five weeks of training and attends night school for her full credential while teaching science to students who are struggling with English and learning disabilities.

But interns like Silva will be allowed to teach students struggling with English only under stricter state controls over their training and supervision, the state Commission on Teacher Credentialing unanimously decided Thursday.

The action seemed to satisfy key parties in what had become a debate over the rights of students who speak only limited English, the effectiveness of interns and their programs such as Teach for America and the flexibility of school districts in hiring instructors.

Derek Ramage of Los Angeles Unified, which had initially opposed efforts to change state rules over intern credentials, said he was satisfied by the outcome. The district employs only 199 interns among its 25,989 teachers — three-fourths of them in special education, with the rest primarily in science and math.

"If the result is that we have interns who are stronger in their teaching of English learners, then that's a good thing," Ramage said.

At a packed Sacramento hearing, nearly 60 speakers passionately and even tearfully testified over whether interns who are not yet fully trained should be teaching the state's 1.4 million English learners. Civil rights organizations, teacher unions, researchers and parents argued that such students have the legal right to fully trained instructors with specialized knowledge on how to teach both language skills and academic content.

They also say the state's 4,400 interns are disproportionately assigned to the state's neediest students — those with insufficient English and learning disabilities — in low-performing schools.

"For us, it's a fundamental issue of equity and a constitutional right to equal educational resources," said Tiffany Mok of the American Civil Liberties Union of California. The daughter of immigrants from Hong Kong, Mok teared up as she told the commission her parents always believed she should have the same opportunities as everyone else.

But a powerful coalition of school boards, administrators, charter operators, reform advocates — and Mayor Antonio Villaraigosa and L.A. Unified Supt. John Deasy — had signed a letter to the commission arguing that state law explicitly allows interns to teach students with limited English and that they should be allowed to continue to do so. Placing more state regulations over them would create needless burdens, they argued.

"This is bureaucracy at its best," said Jessica Garcia-Kohl of Rocketship Education, a charter-school chain based in San Jose.

Several speakers from Teach for America also testified against any proposal to change current rules, which automatically grant authorization to teach students with limited English as part of the intern credential. The national organization trains recent college graduates to teach in low-income schools, which includes lessons on helping those without English fluency. The organization, which has 26 teachers in Los Angeles Unified, had argued that a change in requirements would essentially shut the door on the program and its energetic and passionate instructors.

But Shannon Blankenship, the organization's vice president, said his members appreciated the commission action and looked forward to working with it "to further strengthen education" of students with limited English.

The options to be considered for possible new regulations include strengthening training for interns before they enter a classroom, restricting them to using only certain teaching approaches and beefing up supervision and support.

At Manual Arts, Silva said the debate over intern credentialing is "the least of my worries." During a visit this week, she was busy trying to teach four of her special education chemistry students the laws of gases. To aid those with limited English skills, she used hand motions and such tactile methods as bingo for related vocabulary.

"I want to give back," said Silva, the daughter of Mexican and Nicaraguan immigrants who was the first in her family to attend college. "What better way to give back all of the educational opportunities afforded to me than to provide the same for other students?"

smf: In this article I need definitions as to the meanings of – and the differences between – the words “intern”, “teacher” and “instructor”.  And are those definitions defined by the reporter, the LA Times, LAUSD, The commission on Teacher Credentialing or No Child Left Behind?