INSTEAD OF CLOSING (or reconstituting, charterizing, privatizing, magnetizing or pilotizing) SCHOOLS - HOW ABOUT THIS?

Given that school reformers are always talking about the importance of giving parents “school choice,” you’d think they’d listen to the people who want their neighborhood schools saved.

Updated: March 22, 2013  ::  When Michelle Rhee told D.C. school residents that she, as chancellor of public schools in the nation’s capital, was closing 23 under-enrolled schools, she promised that a lot of money would be saved that could be plowed back into academic programs in remaining schools. It didn’t happen; an audit years later found that the closings actually cost the city $40 million.

It remains to be seen how the most recent round of announced closings will shake out: Chicago just said it was closing 54 public schools this year in what seems to be the largest mass closing of schools in U.S. history; Philadelphia said it was closing more than 20 schools, and Washington D.C., 15 schools. School closings have become a tool of school reformers who say the action is needed either because the targeted schools have too few students or are failing academically — even while they support the opening of charter schools in the same neighborhoods. In Chicago’s case, both arguments for closing schools were made in recent years.

Yet promises made by school reformers who close schools — either because they are under-enrolled or labeled academically failing — are rarely kept, studies have shown. The money savings are most frequently less than promised or non-existent, and most students don’t do any better academically in their new schools, researchers who have looked at closings in cities around the country say.

This is not an argument that no schools should ever be closed. Communities change and school systems have to change, too. But in many, perhaps most cases, there are better alternatives than closing schools, ones that school reformers have so far been reluctant to do because they go well beyond the myopic view of teaching and learning as being driven by standardized tests.

There is a reason that a new study by Public Agenda and the Kettering Foundation shows that there is a divide “between leaders and parents on whether it is more important to preserve neighborhood public schools, even those that are struggling, or whether it is more important to give parents more choice.” Parents, it says, largely want their neighborhood schools improved rather than be closed, it says.

Given that school reformers are always talking about the importance of giving parents “school choice,” you’d think they’d listen to the people who want their neighborhood schools saved. One way is to actually start to address the real reasons that many kids don’t perform well in school: Their lives. Living in poverty has consequences. Living in an unstable family has consequences.

Why not turn under-enrolled schools into community schools? Such a school would offer students the physical, mental and emotional support they need, meals, and extracurricular activities. Parents could take classes, too, and the facility would be open during the weekend too, offering activities and classes that can keep young people engaged. Why not better integrate health services and education services in a way that can actually help students be better prepared to learn? That would not only help individual schools and families but preserve neighborhoods too. Is this the only answer? No. Is it part of the answer? Absolutely.

Decades of standardized-test based school reform hasn’t worked. It has made an unsatisfactory situation in urban public schools far worse. It’s time for a more humane approach. And given that school closings don’t usually save the promised amount

March 21, 2013  ::  A useful new report from Public Agenda and the Kettering Foundation underscores the painful divide between parents and education reformers on the crucial topic of what to do about bad schools. 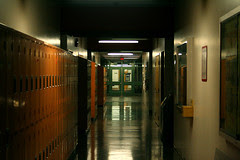 Schools play many roles in communities, and the prospect of closing one undermines most of those.  Photo by hundrednorth>>

In a nutshell, if the neighborhood school is crummy, parents want it fixed. So do community leaders. Ed reformers are far more apt to want to close it and give families alternatives such as charter schools.

As Andy Smarick has perceptively written, schools play multiple roles in communities, and the prospect of closing one undermines most of those. Hence, shuttering a school affects more than the convenience of keeping one’s own kids in a familiar (and generally close-at-hand) facility, maybe even with that nice Ms. Greensleeves who teaches fourth grade there. As Jean Johnson writes on behalf of Public Agenda, based on a recent series of focus groups (as well as much other research), “Most parents see local public schools as important community institutions and viscerally reject the idea that closing schools—even those that are persistently low-performing—is a good way to improve accountability in education.”

On the reform side, however, Johnson writes, “In many communities, school leaders are closing or drastically reorganizing low-performing schools. Many districts are turning to charter schools to replace traditional public schools. Charters are often viewed as more accountable, because if the school does not meet its academic goals, its charter can be revoked. From a leadership perspective, these reforms propel the kind of change that will help more students succeed….”

Yes, she oversimplifies. A lot of school closures (as I’ve noted previously) have more to do with enrollments, capacity, and finances than with performance. And a lot of education leaders have, in fact, done everything they can to avoid drastic interference in low-performing schools—hence the widespread use of the “any other major restructuring” loophole for Title I schools needing “corrective action” due to their persistent failure to achieve “adequate yearly progress.”

The charter part of her reform model isn’t quite right, either. Yes, there are a handful of situations in the charter world—e.g., Ohio’s “sudden death” provision—where test scores alone might cause a charter school to be shut down. But conscientious authorizers do look at other information (e.g., signs of progress, graduation rates, student- and staff-turnover rates, parent and student satisfaction indicators, community circumstances, what sorts of schools would the kids go to instead, and so on). And, of course, heedless or simply greedy authorizers don’t close schools anyway—because they don’t much care, can’t stand the heat, or depend on the school fees for their own revenues.

At the same time, Johnson’s conversations with parents add some important nuance to the school-accountability discussion. They fret that overemphasis on testing fosters dull, drill-centric classrooms and gives rise to incentives to cheat. And it’s clear to parents that there’s more to school quality than test scores, which understandably makes them wary of moves to close or radically restructure schools solely on the basis of such scores. Yes, they favor testing as a useful way of knowing how a school is doing academically, but they lament that too much testing is underway and that test-based data reveal nothing about other important school features and outcomes (examples include character development, creativity, student engagement, and school leadership). Indeed, there’s valuable overlap between the other factors that matter to parents and those that conscientious authorizers (see previous paragraph) apply to their charter schools.

So there is a divide, with merit—and blind spots—on both sides. Yes, it’s ridiculous to judge a school (and take drastic action to intervene in it, even to close it) exclusively on the basis of test scores. Ditto for judgments about teachers. (“Value-added” scores—where feasible and meaningful—are better than absolute test scores, but still are not the full measure of an educational institution or classroom instructor.) On the other hand, student learning is the bottom line, and for too long American public education has paid far too little heed to it when evaluating schools and teachers.

But have we swung too far in the opposite direction? As least as perplexing, do we have—or can we create—additional metrics that tap into these other features of schools and teachers in valid ways, avoiding total subjectivity, favoritism, and caprice?

Such dilemmas deepen as states and schools prepare for new tests being developed to accompany Common Core standards for English language arts and math, as well as new tests that may follow for science. The developers claim that the next generation of assessments will do more than today’s tests to gauge a broader swath of educational attainment. The PARCC consortium, for example, asserts that its “next-generation assessment system will provide students, educators, policymakers and the public with the tools needed to identify whether students—from grade 3 through high school—are on track for postsecondary success and, critically, where gaps may exist and how they can be addressed well before students enter college or the workforce.”

If all of that comes true—and at reasonable cost in dollars and time commitments—we can fairly suppose that test-leery parents may be more satisfied, and that test-weary teachers may find that the assessment results are valuable, not just judgmental.

Today, however, there’s no way to know for sure how it will turn out. We still have two years to wait before the new assessments are administered for the first time. We have no idea where their “cut scores” will be set. And we have no idea how—or when or even whether—Congress will figure out how all of this factors into the next generation of ESEA.

As if that weren’t complexity enough, some educators have asked whether this period of change and uncertainty in standards and assessments should be accompanied by some sort of accountability moratorium, even a testing hiatus. Let the education system—and the teachers—gear up for the new arrangement (and master the new standards and pedagogical “shifts” that are built into them) without having to look over their shoulders at the same time for fear they’ll lose their jobs—or their schools—on the basis of scores on the old tests. Call it the education version of “quantitative easing,” if you will.

It’s not a crazy suggestion. Neither is it a perfect proposal, because “suspending” accountability (and testing) for two years, just as people are getting accustomed to it, would smack of a return to the bad old days and would likely provide cover for some dreadful schools and instructors to continue unchanged, damaging kids for two more years.

I wonder, though, if there isn’t some way to turn down the heat a bit during this transition period and encourage school systems and educators to focus on what’s coming rather than on the academic expectations that are going out of style.

I’m not clever enough to devise that interim arrangement. But it’s worth smart people thinking through, maybe even before the spring 2013 test scores come in.

Will It Be on the Test by 4LAKids