Vergara: STOP TENURE TYRANNY AND SHOW SOME LOVE FOR OUR HARDWORKING TEACHERS 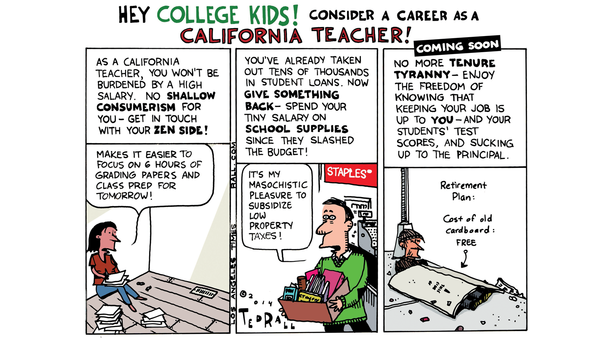 Teacher tenure is under attack in California. But how are we going to attract new teachers? Salaries are low, conditions are difficult, the work is exhausting. (Ted Rall / For The Times / February 6, 2014)

February 6, 2014, 5:00 a.m.  ::  My mother retired recently from teaching under pretty much the best possible working conditions one could expect in an American high school: She taught high school French in an Ohio suburb that is at least 90% white, ranging from middle to upper middle class. By the end of her career, she was relatively decently paid. Her students weren't hobbled by poverty or challenged due to not having mastered English. Since French was an elective, her kids pretty much wanted to be there (though the possibility of having the class cut because of low enrollment was a worry).

Still, it was a tough job. Sure, class was only from 8 a.m. to 3 p.m., and she got those long summer vacations. But I remember watching her get up at 5:45 a.m. so she could prepare for class during the calm before the morning bell. She rarely got home before 5 p.m. — there was always some meeting to attend — and then she had to grade papers and prepare for the next day's classes.

Teaching is a performance. You've got six to seven hours to fill, keeping the kids entertained and engaged enough to get them to pay attention to what they need to learn. It's exhausting, especially when you were up until 11 the night before correcting tests and averaging grades.

The summers were nice, but my mom spent the last half of June and the better part of July wiped out, recuperating. As for the last half, it wasn't like we could afford to go on any trips, not on a teacher's crummy salary. For the first few decades of a teacher's career, the pay is lousy.

Raises don't keep up with inflation. Parents constantly complain, often without cause. Administrators constantly lard on more responsibility, more paperwork, more rules, always more stuff to do on the same crummy salary. Moreover, budgets are always being cut. Even in lily-white districts like my mom's, teachers find themselves hitting the office supply store to buy stuff for their students — out of that crummy paycheck.

During the last few decades, particularly since the Reagan administration, the right has waged war on teachers and their unions. From No Child Left Behind to the sneakily anti-union, anti-professionalization outfit Teach for America to the Common Core curriculum, conservatives are holding teachers accountable for their kids' academic performance. Sometimes it's fair. Sometimes it's not. Even the smartest and hardest-working teacher is going to have trouble getting good state test scores out of a classroom full of kids brutalized by abuse at home, poverty, crime and neglect.

The latest skirmish in the edu-culture war is over tenure, and it's unfolding in Los Angeles County Superior Court. Supt. John Deasy of the Los Angeles Unified School District is supporting a lawsuit, backed by Students Matter, that would eliminate teacher tenure as we know it in California. Tenure, say nine students recruited as plaintiffs, makes it too hard to fire bad teachers.

Not so fast, counter the unions. "Tenure is an amenity, just like salary and vacation, that allows districts to recruit and retain teachers despite harder working conditions, pay that hasn’t kept pace and larger class sizes," James Finberg, a union lawyer, told the court. It also protects workers/teachers from being fired over their political beliefs, gender and religion — or just being too "mouthy," i.e., speaking out against budget cuts.

As a parent, it's easy to see why it would be good to make it easier to fire bad teachers. As the son of a hardworking teacher, it's easier to see why teachers would need tenure. As in any other workplace, which teachers are judged "good" or "bad" falls to the boss — in this case, usually the school principal — who may or may not render a fair judgment free of personal bias based on personality or philosophy. Accusations of wrongdoing or incompetence levied by parents may or may not be fair.

Until my mom got tenure, she was afraid of disciplining students. She didn't dare be active in her union. She didn't want to reveal, in a Republican town, that she was a Democrat. Tenure didn't make her lazy after she got it, but it did make her more relaxed, less terrified of her boss. Which made her a better, wiser, smarter teacher.

Tenure doesn't prevent districts from firing teachers. It makes it hard. (Not impossible: 2% of teachers get fired for poor performance annually.) Which, frankly, is something that every worker who has ever experienced an unfair review should be able to empathize with. If anything, the only thing wrong with tenure is that only teachers can get it.