Two pairs of spelling contestants duel for hours, forcing judges to suspend competition for a while. In one case, organizers ran out of words. 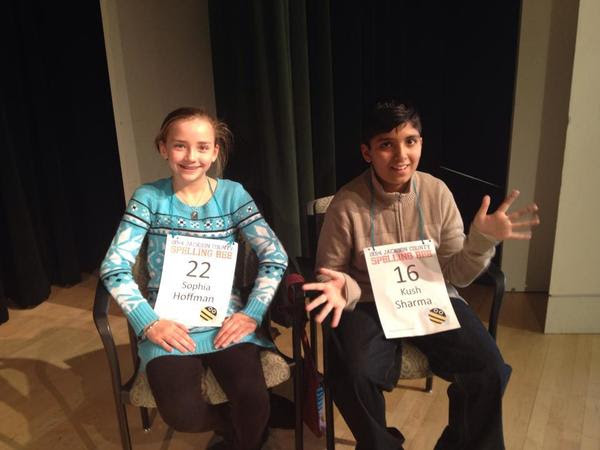 Two spelling bee competitions in the Midwest over the weekend had to be suspended and rescheduled when their brilliant young contestants dueled for hours to a temporary tie, having mastered dozens of bizarre and foreign words at an early age.

Two contestants remain in each competition. Each pair was tentatively set for a rematch in two weeks to determine who will head to the Scripps National Spelling Bee.

In Kansas City, Mo., Sophia Hoffman, 11, and Kush Sharma, 13, were so good at spelling that the judges ran out of words to give them.

Among the words they got right: "mahout" (an elephant driver); "scherzo" (a musical term); "barukhzy" (an Afghan hound); and "fantoccini" (a puppet show).

"Some of these words I literally don't even know how to say, and I have a master's degree," Anna Francesca Garcia, a co-coordinator for the bee, said Monday.

Organizers said Sophia was particularly worried about "schadenfreude" — right before she spelled it correctly.

Schadenfreude means feeling joy from the suffering of others. There appeared to be none of that at Saturday's competition in Kansas City, organizers said.

The 9 a.m. event began with 25 spellers, 23 of whom were eliminated in two hours. Former contestants stayed to cheer on Kush and Sophia as they battled into the afternoon.

That spirit infused Kush and Sophia too.

"This entire time they were extremely supportive of each other," Mary Olive Thompson, an outreach manager for the Kansas City Public Library, said of the pair.

"He's very good, very intelligent. … She was very intelligent too," Kush's father, A.K. Sharma, told the Kansas City Star, adding that it was his son's first competition at the county level.

The organizers started with a list of prepared words from Scripps, but had to turn to the dictionary for more when neither Kush nor Sophia could defeat the other.

"It was like watching a tennis match going back and forth," Thompson said.

The face-off had lasted more than four hours when organizers decided to halt the competition so the next words could be picked more carefully. Organizers wanted to ensure that each contestant got equally difficult words to spell.

"If I had my way, it would be great to send both of them as Jackson County Spelling Bee champions, because they're both phenomenal," Thompson said.

A similar battle stretched for hours in DeKalb County, Ill., on Saturday as Matthew Rogers, 13, and Keith Mokry, 14, conquered such obscure words as "trepak" (a Ukrainian folk dance), "issei" (a Japanese immigrant) and "Weimaraner" (a breed of dog), according to the Daily Chronicle.

Over 3 1/2 hours and 74 rounds, the crowd thinned out until only the boys' families, the contest administrators and a local reporter remained, according to Amanda Christensen, the event's coordinator.

The duel almost came to an end when Matthew misspelled "punctilio," a word for a small point of procedure.

And a punctilio is what ended up giving Matthew a second shot at spelling a different word when his parents appealed to the judges, who agreed that the announcer had mispronounced the word, Christensen said.

The event was eventually put on hold, with the final showdown tentatively scheduled in two weeks. The organizers still had words to give the contestants, but things were getting a little out of hand.

"They had been on stage for 3 1/2 hours," Christensen said. "They hadn't had lunch. It was time to call a rematch."

Such marathon sessions are not unheard of: The Etowah County Spelling Bee in Alabama reportedly went for 79 rounds this month before Joshua Kelley claimed the championship.