The El Camino charter team scored 63 out of a possible 72 points in the game show-style contest, in which students have seven seconds to answer multiple-choice questions on a variety of subjects.

The Super Quiz counts for only about 5% of a team’s decathlon score, but it’s the most high-pressure event and is open to the public.

About 500 students competed in the L.A. Unified Super Quiz at the Roybal Learning Center in downtown Los Angeles.

The winner of the district decathlon, to be announced Feb. 7, will go on to compete next month in the state Academic Decathlon in Sacramento.

World War I is the theme as about 500 scholars from 42 schools participated in the annual game-show-style event.

February 1, 2014, 9:33 p.m.  ::  Hundreds of students paraded into a gymnasium on Saturday afternoon at USC's Galen Center, their friends and families cheering from the bleachers as ragtime music played.

The Super Quiz, the final event in the Los Angeles County Academic Decathlon, was about to start.

The game show-style competition requires teams of nine high school students to answer three dozen multiple-choice questions on subjects including art, economics and science. Questions were read by Fox 11 news reporter Gigi Graciette, and students had just seven seconds to punch in their answers on hand-held electronic devices. The results were displayed instantly on two large screens in front of the players.

Each decathlon team includes students with A, B and C grade-point averages.

The Super Quiz counts for only about 5% of a team's score, but it's the most high-pressure event and the only portion of the 10-subject scholastic competition that is open to the public. It's also an indicator of which squads have a shot at advancing to the state competition in Sacramento next month or the national competition in Honolulu in April.

At Galen Center, about 500 decathletes from 42 public high schools around Los Angeles County answered questions about early gramophones, the Ernest Hemingway novel "The Sun Also Rises," polygenic inheritance and the Treaty of Versailles.

"That seven seconds is a lot of pressure," said Hiral Ashani, a 13-year-old freshman at Burbank High School. "Your team is counting on you, and there's no one to help you out, so it's really nerve-wracking."

Ashani and his teammates dressed in World War I aviator outfits, complete with leather helmets and goggles. Others squads wore personalized cardigans, T-shirts or Army fatigues.

Patricia Campos was in the bleachers cheering on her son Nicholas, a senior at Edgewood High School in West Covina. She said her son's team held 24-hour study sessions on weekends and added more hours on weekdays in addition to doing their regular homework. "They stay until 10 or 11 o'clock at night just to prepare for this," she said.

It paid off, at least with the Super Quiz. Edgewood High tied with Redondo Union High School for first place at Saturday's showdown, according to preliminary results. Results for the full competition, administered by the county Office of Education, will be announced on Feb. 12.

Another 500 or so students from 59 teams in the Los Angeles Unified School District capped off their Academic Decathlon with the Super Quiz at Roybal Learning Center, near downtown. Some of the top-scoring teams were El Camino Real Charter High School and John Marshall High School, according to unofficial results. 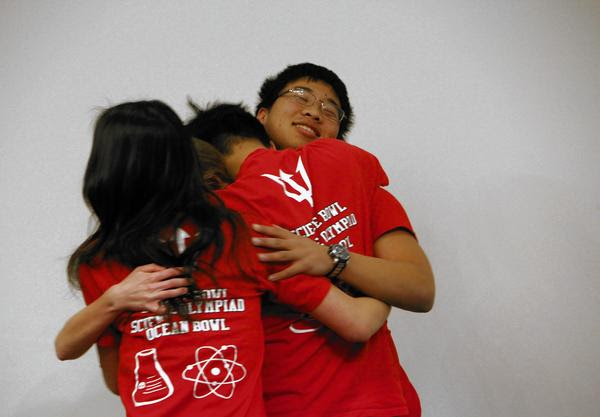 February 1, 2014, 8:31 p.m.  ::  In the end, it came down to a rematch: Arcadia and University high schools, two teams made up of the brightest young science minds in Southern California who one year ago faced off just like this, armed with nothing more than a small pad of paper and a pencil against a 16-minute rat-a-tat-tat of questions like this:

"According to VSEPR bonding theory, if two of the bonded atoms in an octahedral molecule are replaced by two electron pairs, the molecule will assume what geometric shape, such as in XeF4?"

Twenty-four teams of five students each competed Saturday in the 22nd annual JPL Regional Science Bowl, a "Jeopardy"-style competition. The match was organized by and held at NASA's Jet Propulsion Laboratory — so even volunteers keeping score and reading questions had PhDs.

But the focus was on the young men and women from schools in Orange, Riverside, San Bernardino, Santa Barbara and Ventura counties as well as L.A. County (though not L.A. Unified School District, which has its own competition). Winners will compete at the National Science Bowl in Washington, D.C., in April.

Whereas Arcadia and University High, in Irvine, are local powerhouses whose teams have won the regional competition multiple times, others like Xavier College Preparatory High School in Palm Desert were relative newcomers.

Its members wore white lab coats and seemed to be having fun after spending the morning answering questions about chemistry, earth science, biology, energy, physics and math.

"There's some teams who will dominate," said senior Carl Maggio. "For us, it's more about the experience."

The team's five members have known one another for years, three of them since kindergarten, they said. And although they took the event seriously, practicing two to three hours per week, they knew their effort wasn't quite comparable to that of some of the more experienced teams.

"For a lot of teams this is like a sports event. They practice every day," Carl said.

The team from Huntington Beach High School skipped the lab coats and the school T-shirts worn by other teams and came in suits.

Theirs is a young team — made up mostly of sophomores, all of whom were in awe of team member Marlon Trifunovic, 15, who answered the question "What is the fraction for the repeating decimal .13131313…" before the answers had even been read. (Answer: 13/99)

"He did it in his head, he didn't even write it down," said Coach Ken Ostrowski.

Then there was Arcadia High School, whose team has won the regional title multiple times.

Team members gave up Friday evenings and Sundays to prepare for this, they said. They practiced not just the science but also skills like using buzzers, improving reaction times.

Each team member was assigned a specialization: for senior Bryan Clement Tiu it was math, for captain Jerry Li, chemistry and physics, for junior Kevin Wang, earth science and physics.

By the afternoon they were undefeated, and during later rounds, they were dominant, beating one team 102 to 22.

Each round lasted 16 minutes, with a two-minute break.

Jerry's parents, James and Joceline Li, sat on the sidelines, watching the competition.

"My heart is beating, boom boom boom," said Joceline Li, who held her breath and clutched her husband when the score was close, though both Lis acknowledged being a bit lost by the level of competition.

"I can understand the questions," said James Li. "But the answers? Forget it."

In the final round, Arcadia started off strong, racking up 32 points before University could even get on the board. But just as a year ago, the day belonged to University, whose team won, 114-68.

"They were really excited to come back because they won last year," said University Coach David Knight. "They knew other teams were going to be kind of gunning for them."

After the loss, team Arcadia gathered together and spent the next few minutes going over the questions they got wrong.

"I'm very proud of them," said Coach Cherryl Mynster. "They knew their stuff but the other team just outperformed them a little bit…. We'll be back next year."