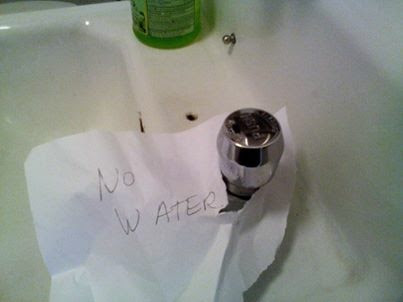 Repairs Not iPads/Facebook | A photo posted on a Facebook group called "repairs not iPads."

Photos posted on a group page called  "repairs not iPads" show busted plumbing, holes in walls and tiling and evidence of insect and rodent infestations. The page implores readers to share their own, identifying itself as "a place for teachers and the community to document neglected school repairs while construction bond money is diverted to purchase iPads." The group's administrator is unnamed.

Los Angeles voters have approved about $20 billion in construction bonds to build new schools and upgrade aging sites in the district. School officials and the Citizen's Bond Oversight Committee said they've obtained legal opinions arguing the funds can also be used to buy new iPads, too.

L.A. Unified has spent near $150 million to purchase about 100,000 iPads out of bond money so far. The program will incur related expenses, including hiring trainers and IT staff and upgrading wifi networks at hundreds of schools.

If the iPad program is rolled out district-wide, as Superintendent John Deasy intends, it's estimated to cost over well over $1 billion in bonds plus yet-unknown annual upkeep from the district's general funds.