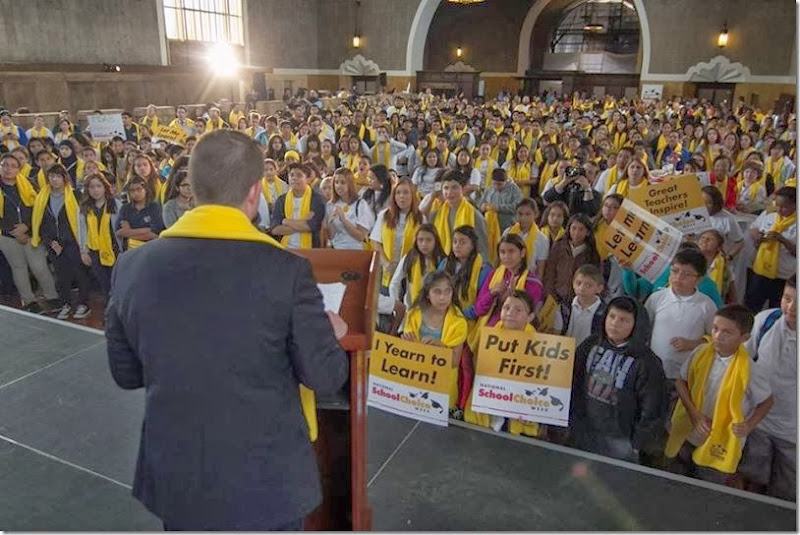 from the NSCW Facebook Page. How many kids do you see who should’ve been in school?

6 Feb 2014  :: A week ago  Dr. John Deasy, the superintendent of Los Angeles Unified School District took time from his busy schedule running the nation’s second largest school district and testifying for the plaintiffs in the Vergara v. California lawsuit (the plaintiffs allege that LAUSD does a poor job of educating children) to address an invited bused-in audience of charter school proponents, parents and students at Union Station in support of “National School Choice Week”.

FROM THE INVITATION: “Hosted by National School Choice Week, the tour – which will feature 14 “whistle-stop” events from Newark to San Francisco – will provide students, parents, educators and community leaders with the opportunity to celebrate effective education options, while calling for even greater school choice in California and across the country.

“The Los Angeles event, the thirteenth event on the tour, will take place on Thursday, January 30, 2014 at 10:00 a.m. at Los Angeles Union Station. Attendance is free but an RSVP is requested by visiting www.schoolchoicetrain.com.”

Later in the invite/Press release it says LAUSD is one of the event planners.| http://bit.ly/LTePBG

Really? 10AM on a school day is a good time to invite students?

Parents should be able to choose where their kids go to school. They can choose public education. They can choose private schools – or parochial schools. There are Montessori schools and Waldorf schools. The Catholic Church runs schools. Synagogues run schools. The Church of Scientology runs schools. Home schooling is an option. If there’s a program at another public school that fits their child’s needs  parents should be able to choose it.   The premise of Charter Schools - where a community of public school educators and parents collaborate to run their public school with the promise that they will do a better job than the traditional administration resonates.

But in reality NPSCW is sponsored, funded and run by the media machine that is the School ®eform Movement. The Charter Management Organizations, The Vulture Venture Capitalists pretending at social entrepreneurism. The Billionaire Boys Club and their foundation friends at Gates, Broad, Walton, etc. They are proponents of School Vouchers Light – channeling public education money into private hands. Break up the school district, break up the teacher unions, privatize public education - one school at a time.

It is not through administrative or judicial or semantic error that the US Department of Commerce and federal and state courts have found charter schools to be private schools. Quod si fortasse quacks quasi anatem anatis.

Last week the would be proponents of school choice staged a whistle stop tour that involves no trains, no private schools, no home schoolers, no Montessori or Waldorfs or parochial Schools.  They came to Union Station and they held a rally. And Dr.  Deasy spoke to them and encouraged their efforts. During school hours. With children – who by law should have been in school – in attendance,  [see photo above. The crew cut guy with the scarf in the photo is not Dr. Deasy – but he is the featured speaker in the video clip below.] This was not a field trip to explore the wonderfulness of rail transportation or the history+achitecture of Union Station. This was not a celebration of student success or the ribbon cutting of a new school.

This was an overtly political event.

This was just as much a disruption to the educational day as a teacher walk-out would have been.

Shame on the parents who allowed their children to be pawns. Same on the educators who thought this was a good use of their time. Same on the media for covering it and shame on the PR hacks who promoted it.

And shame on the superintendent for showing up and speaking.