Marshall team members forge friendships, gain confidence and learn as they train for the statewide competition after winning the L.A. Unified contest. 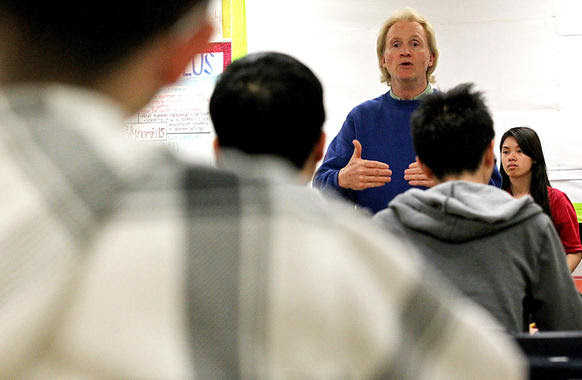 February 22, 2014, 3:00 p.m.  ::  Kenneth Huh and his parents have the same conversation over and over at the dinner table. They want to discuss the John Marshall High School junior's medals in the speech and interview portions of the Academic Decathlon earlier this month.

Kenneth, 16, suffers from hearing loss in both ears and the impairment affects his speech as well. He has trouble pronouncing words beginning with H, S and Z.

His parents, Kenneth said, are proud of him for those awards. "They don't bring up my six other medals, like in art and math," he said, smiling.

Winning the medals culminated in what he describes as "the best week of my life." Before joining the decathlon team, he isolated himself. Those who were nerdy or shy, or those with disabilities, he said, were his only friends.

"Joining decathlon, I was the odd one out, but as I got to know [the team members] more, I got included and felt better about myself," Kenneth said. "Now, one of my favorite things to do is say 'hi' to random people in the hallway or outside."

Members of Marshall's nine-member decathlon team have learned about themselves and one another, along with the 10 academic subjects they needed to know for the grueling competition. This year, the Los Feliz school beat out all other L.A. Unified campuses; Marshall will go on to compete in Sacramento next month. The school placed first in the L.A. Unified competition in 2010 and won the district's first national title in 1995.

"The school has done a great job of supporting the team, nurturing it and helping it grow," Arnold said. "It's part of the school culture."

At Marshall, study sessions start at 2 p.m. and are held six hours a day, six days a week. Students zip between rooms on the school's third floor and receive help from teachers and former team members Amy Tan, who is a co-coach in math, and Stanford University freshman Kevin Martinez, who specializes in economics.

Speech and interview practice start at 3:30 p.m. The boys slip into pressed blazers. To warm up, some read Ernest Hemingway's "The Sun Also Rises" with a cork between their teeth. The team's only girls, Kimiyo and Alayna, change into high heels over their mismatched socks. Alayna practiced her speech about family and baseball; her gaze never veered from the lockers a few feet away.

She joined the team after shattering her ankle playing softball. She wanted to feel part of a group again.

Alexander has a different story. He stopped attending decathlon practices last summer to continue playing varsity football. But he came around after his mother and Welch implored him to return to the decathlon team.

He said participating in decathlon eased his mother's fears that Alexander would drop out of school, as his brother did a few years ago.

He won nine medals at the competition, five of them gold.

"My brother told me 'You're going places.' It was the proudest look I've ever seen on his face," Alexander said. "To have that from my mother and brother was the greatest satisfaction I could have. I thanked Mr. Welch for that after the city win."

On a recent evening, the team discussed a practice economics exam. One question stumped the students — except Kimiyo.

"Yes! I got it. Do you want me to explain it?" she asked excitedly, as the group broke into laughter.

She said she joined the team as a way to challenge herself and as a way to thank her mother, a single parent, for working hard to support her.

Aninda joined decathlon after a trip to Bangladesh a few years ago. He saw throngs of children begging for taka, the country's currency, and he met a boy of about 13 who quit school to work in a car repair shop to support his family.

"It changed me and motivated me to use my time and the opportunities I had for myself," Aninda said. "Their lives aren't great and yet, I have a decently pretty good life. I was wasting it."

He started as a C student his first year and moved up to the B group. His parents were suspicious, wondering if Aninda truly was attending decathlon sessions — until his report card showed six A's and two Bs. His father cried.

Aninda didn't do it alone.

"Whenever someone has a problem or [is] feeling down, everyone gathers to help them out with a little intervention, if you will," Aninda said. "I had trouble with confidence before decathlon, but now I know I can do anything."

The group ended the recent study session by testing one another's strength with push-ups. On Valentine's Day, they played air hockey, activities that Welch sprinkles throughout the study sessions to keep the atmosphere fun.

Some students call him the father of the group. It fits — especially because Welch doesn't have children.

Welch worked with Kenneth on his pronunciation and articulation three months before the competition. Kenneth won a gold medal in speech and a silver medal in interview.

"The work that Mr. Welch does for us is insane," Alexander said, noting that the coach spent two years trying to convince him to try decathlon. "I've never seen someone dedicate themselves the way that he deals with us. Props to him."