L.A. UNIFIED HAD REQUESTED GUARD AT CROSSWALK WHERE WOMAN WAS FATALLY HIT. But its request was denied, officials say. + smf’s 2¢ 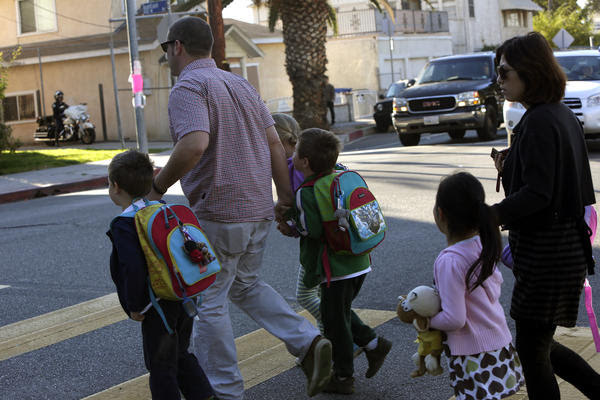 People cross in front of Le Conte Middle School where a woman was struck and killed Tuesday by a big rig while crossing the street with her daughter. (Irfan Khan / Los Angeles Times / February 12, 2014)

February 13, 2014, 6:05 p.m.  ::  The Los Angeles Unified School District sought a guard more than a year ago at a crosswalk near a Hollywood school where a mother escorting her child was fatally struck by a big rig, but city transportation officials denied the request because of "limited resources."

Marleni Edith Barrera, 42, of Los Angeles was in the crosswalk with her 9-year-old daughter on their way to Citizens of the World Charter School Hollywood on Tuesday when a big rig struck her and the girl, authorities said.

Citizens of the World shares a campus with Joseph Le Conte Middle School, an LAUSD campus. District officials said the Los Angeles Department of Transportation is ultimately responsible for placing guards at crosswalks. But L.A. Unified officials may ask the department to conduct an "evaluation for the necessity of a crossing guard," said John Sterritt, director of the district's Office of Environmental Health and Safety.

"We did follow up," Sterritt said, "but I've found no evidence that we heard anything."

A city transportation spokesman this week issued a statement saying the crosswalk "qualified for a crossing guard but one was not assigned due to limited resources." The spokesman did not immediately clarify whether a study had been conducted.

"Safety is a priority for the department, and we are looking at increasing the resources allocated to the crossing guard program and identifying additional safety measures," the statement said.

In the wake of the tragedy, the district resubmitted its request for a crossing guard Wednesday morning, Sterritt said.

Meanwhile, authorities offered new details on the accident. Police Lt. Theodore Edwards said the driver of the big rig stopped before entering the crosswalk but did not see the pedestrians, so "started up again."

The driver proceeded through the crosswalk but, "as soon as he was flagged down by another vehicle, he stopped the truck, got out and rendered aid," Edwards said.

Police had not made any arrests as of Thursday, Edwards said.

Le Conte Middle School is uniquely situated smack dab in the middle of Fountain Avenue in Hollywood; Fountain is a well known secondary 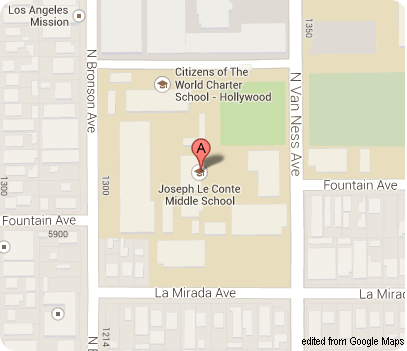 East-West “short-cut”  traversing Hollywood. Le Conte’s location requires traffic to drive around it,   creating six pedestrian crossing points in fairly heavy traffic. Bronson and Van Ness are secondary North-South Routes.  This is complicated in that the morning bell at Le Conte (and Citizens of the World) coincides with drive time/rush hour.

I am not calling for a full  EIR process in future charter collocations – but I would think that a comprehensive environmental and safety impact review should be required if it is not already.

Following the accident a Los Angeles School Police Officer has been assigned to the subject crosswalk. I hope that isn’t the officer lurking in the background  in the photo above.  The police presence should be public – inspiring careful driving – not hidden – increasing ticket revenue!