The team takes first place with 55,785.7 out of a possible 65,400 points. Previous winners Granada Hills Charter and El Camino Real Charter  - as well as Franklin and Grant - also advance to the state level. 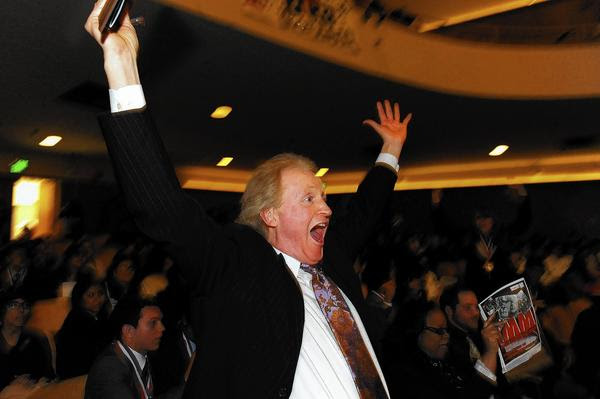 The Los Angeles Unified School District named the nine-member team this year's winner of its annual Academic Decathlon on Friday at an awards ceremony at Hollywood High School.

A victory for L.A.Unified at the state level will send the top team to Hawaii for the national championships in April.

The auditorium at Hollywood High erupted in loud cheers as the winners were announced. Marshall High supporters filled the front of the balcony holding a school banner and chanting "Marshall, Marshall, Marshall."

Marvin Paparisto, a 17-year-old Marshall senior, took the top prize for scoring the highest number of points — for the second year in a row. He said he lost count how many medals he won, showing off a large stack.

"It was a team event," he said, adding that the group has been studying since June. "It's fun for me to be in a room full of smart people that I can connect with."

Larry Welch, who has coached the team since 2001, said the win was "remarkable."

Rae Laguna, the aunt of Marshall team member Alayna Myrick said: "When I heard that they won the first word that comes to mind is pride."

She said the coach is very dedicated and tremendous with the students.

The district has won 19 state and 14 national titles since 1987. John Marshall last won the state and national championships in 1995.

"Congratulations to the players and coaches from Marshall for their tremendous victory in the 2014 LAUSD decathlon," he said in a news release. "I wish Marshall and all the top teams the best as they strive to keep the national championship in the LAUSD family."

John Marshall's team scored 55,785.7 out of a possible 65,400 points during the decathlon, culminating at the Edward R. Roybal Learning Center in Los Angeles last week. Fifty-nine teams of nine students with A, B, and C averages took part in this year's competition.

Teams tested their knowledge about World War I, which included speeches, interviews, art, mathematics and economics. The high-pressure "Super Quiz" relay ended the competition with El Camino Real and John Marshall tying for first place with 4,800 out 5,400 possible points. Granada Hills placed second with 4,350 points in the same round.

Eleven decathletes earned perfect scores in the "Super Quiz" relay. John Marshall's Paparisto took top prize in the A student division while Bhowmick won in the B students group and Rohan Boone from El Camino Real Charter earned the highest score among the C students.