KEEP CALM AND KEEP MAKING A PROFIT FOR PEARSON

An Interview with Alan J. Singer by Michael Shaughnessy 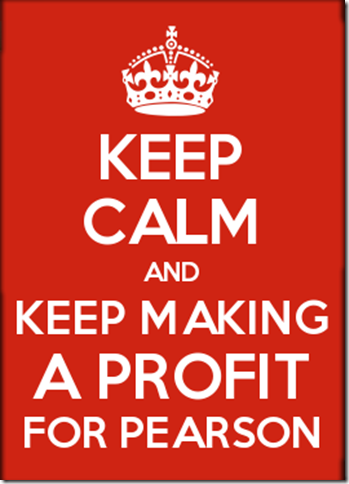 1.  Alan, recently you wrote about some of the skullduggery that Pearson seems to be involved in relative to education and testing. Can you briefly summarize?

It is hard to be brief when it comes to Pearson. The Guardian, one of the leading British daily newspapers, charged that Pearson and other “unelected oligarchs” and “private sponsors” with trying to take over the British school system. Among other things, Pearson set up a supposedly academic study group, the Pearson Think-Tank, to promote “reforms” in the United Kingdom aligned with its business initiatives. In the United States, the Attorney General of New York State, charged Pearson with blurring the lines between its not-for-profit Foundation and its for-profit company. It was using the Foundation to drum up business for the company. As a penalty and to avoid prosecution the Pearson Foundation agreed to pay $7.5 million into a fund managed by the Attorney General to support education in high-needs schools.

On its webpage, Pearson likes to describe itself as “the world’s leading education company, providing educational materials, technologies, assessments and related services to teachers and students of all ages.” It claims to “operate in more than 70 countries” where it publishes under different names including “Scott Foresman, Prentice Hall, Addison-Wesley, Allyn and Bacon, Benjamin Cummings and Longman.” Perhaps more significantly, Pearson is deeply involved in creating and promoting “electronic learning programs and “test development, processing and scoring.”

Pearson does not have a monopoly on educational services; there are a few other companies involved in global education-business. They include Houghton-Mifflin in publishing and ETS and the College Board in testing. But the companies are growing larger and larger and more inter-connected. While they compete in some areas they cooperate in others.

I think we are looking at an oligarchy similar to OPEC and the old American auto industry where a few companies dominate an industry and establish conditions for other companies and consumers. In the 189os political cartoons showed Standard Oil as a giant octopus with its tentacles stretched into every part of American industry. I like the metaphor for Pearson as well, although this time the tentacles of the octopus are strangling global education.

3) Often , in many instances, schools are provided an offer “that they just can’t refuse” to steal a line from the Godfather. How does this happen in England and in other parts of the world?

In the UK, what we call charter schools, are called academies. The Guardian charged that “the break-up of the education system in this country, like the dismantling of the National Health Service, reflects no widespread public demand. It is imposed, through threats, bribes and fake consultations, from on high.” In one well documented instance in a community in south London, a school was rated “outstanding” by the British government’s quality control department. However, after several senior staff retired and a computer failure caused a delay in reporting data to inspectors, the school received a “Notice to Improve.” Although the school subsequently met the required standards, it was notified by the British Department for Education that it would be turned into an academy.

The British Department for Education held a closed meeting with school administrators and reportedly told them that if they did not immediately accept the demand to become an “academy,” they would be fired by the local school authority. They threatened that if local school officials did not carry out the order, it would be replaced by an interim board of governors that would. They also warned school administrators not to inform parents about the meeting or the decision.

4) England has a problem with NEET kids- they are Not in Education, Employment or Training. Is the entire Pearson model to try to promote everyone going to college?

In the United States we have a nebulous goal that every high school graduate must be college or career ready. Unfortunately, no one is quite clear what that means or what jobs are available for a college and career ready young people. Pearson actually seems to be promoting vocational education in the UK and in Australia has a vocational education division. At this time, Pearson’s private college only offers degrees in “business and enterprise.” Another Pearson initiative is its online eCollege. But just as in the United States, I am not sure where the jobs are in the UK and Australia for people who complete these programs.

5) It seems that foundations and charitable organizations have some clout. Which groups are promoting these academies?

Absolute Return for Kids (ARK) is an international children’s charity based in Great Britain that operates 18 academies in the UK. It was co-founded by hedge fund financiers. The Harris Federation operates 13 academies. It headed by a group affiliated with retail stores. Other groups appear to be using public money to promote religious beliefs, including the Emmanuel Schools Foundation, the Oasis Trust, and United Learning.

6) Should parents simply “keep calm and allow Pearson to keep making a profit?”

I think parents in the UK, the United States, and the rest of the world, have to actively resist efforts by companies like Pearson to control public education. Pearson’s so-called not for-profit activities serve the global profit making goals of the Pearson company. Quality education is only a second thought. Think about the impact of Walmart.

Once it wipes out all the other stores in an area, people have no choice but to go there for products and to go there hoping for work. If parents, teachers and students do not organize to resist corporate incursions into public education, Pearson and other similar companies will be coming to a city, town, and school near you!

7) OFSTED is the Office of Standards and Education in England and they have some power to rate schools and indicate how well they are doing. But do these OFSTED folks understand about kids with special needs (the visually impaired, the hearing impaired, kids with autism, attention deficit disorder)?

OFSTED is responsible for inspecting state-funded schools in England. It has actually been attacked by both the left and the right. The right-wing think tank Civitas for stifling innovation, which most likely meant it was not fully supportive of the academy schools. The National Union of Teachers is one of fiercest critics of OFSTED because it believes schools should be accountable to families and the local communities. I am not familiar enough with the issues in the UK to comment on OFSTED’s response to children with special needs.

8) Who is this Michael Gove and what does he know about education? Has he ever been a classroom teacher?

Grove is a strong supporter of the academy movement and defended high-stakes testing as “tools of social mobility” based on human nature because “humans are hard-wired to seek out challenges”; sources of “satisfaction and contentment” for students on “a job well done”; and the basis to “ensure that a solid base of learning is complete before progressing on to further learning.” He believes tests are great because they “drive creativity” and “signal that a person is ready to take on greater challenge and responsibility.” Unfortunately, there was no research cited to support these over-the-top claims.

9) Charter Schools in America and Academies in Great Britain – what do they have in common?

They are businesses out to make money off of the public purse. Their primary goal is profit, not the education of children. Among the arguments made by advocates for charter schools in the United States is that they expand consumer choice and that given the state of education in many inner city minority communities experimentation with alternatives can only help the situation. I think the UK academies are selling a similar message. As buzz words, choice and experimentation always sound good. After all, we know about the disappointing performance of many students in inner-city schools under the current educational system so why not try something else? I think problems in the American health care industry suggest a scenario when for-profit companies take over the education business. First, decisions are made based on profit, not human needs. Hospitals are closed, services are suspended, and communities are abandoned because they do not generate enough revenue. Expensive tests and procedures are ordered because they are covered by insurance and bring in big bucks. Patient needs are secondary. We want our children treated human beings, not as commodities.