2/12/2014 9:39 am EST  ::  In her essay Pilgrimage in The New Yorker, Susan Sontag recalled that when she went to North Hollywood High School she was an avid reader, and as a teenager in Los Angeles even met one of her literary idols, Thomas Mann. Reading transformed her into becoming one of the most famous literati of the 20th century and what Christopher Hitchens called an "intellectual heroine."

"The loss of the middle school libraries amounts to a literacy crisis," says Hamrick. "Middle school is the last chance for teachers and school librarians to reach out to each student, and make them readers. By the time they get to high school, habits of readership are pretty well established. Illiteracy in teens shows up in avoidance, disinterest, and rejection of the whole educational program. It is a root cause of our high drop-out rate in Los Angeles."

The middle school library crisis in Los Angeles is also a civil rights issue. According to Mr. Hamrick, the closure or de-staffing of 72 middle school libraries is a testimony of segregation and inequality of access. The "literacy deserts" that exist in some areas of Los Angeles are not unlike the "food deserts" that exist in these same neighborhoods. The library closures are concentrated in the south and east parts of L.A., where students are more likely to be Hispanic or African-American and from working class families.

The elimination of middle school libraries in south and eastern Los Angeles reminds this writer of the casualties of the Siege of Sarajevo during the Bosnian War in the 1990s, which was of great concern to Susan Sontag. Instead of ethnic cleansing, however, it seems LAUSD is enacting a literacy cleansing of working class minority kids. This is not less devastating since illiteracy is a much of a barrier as any discriminatory policy. 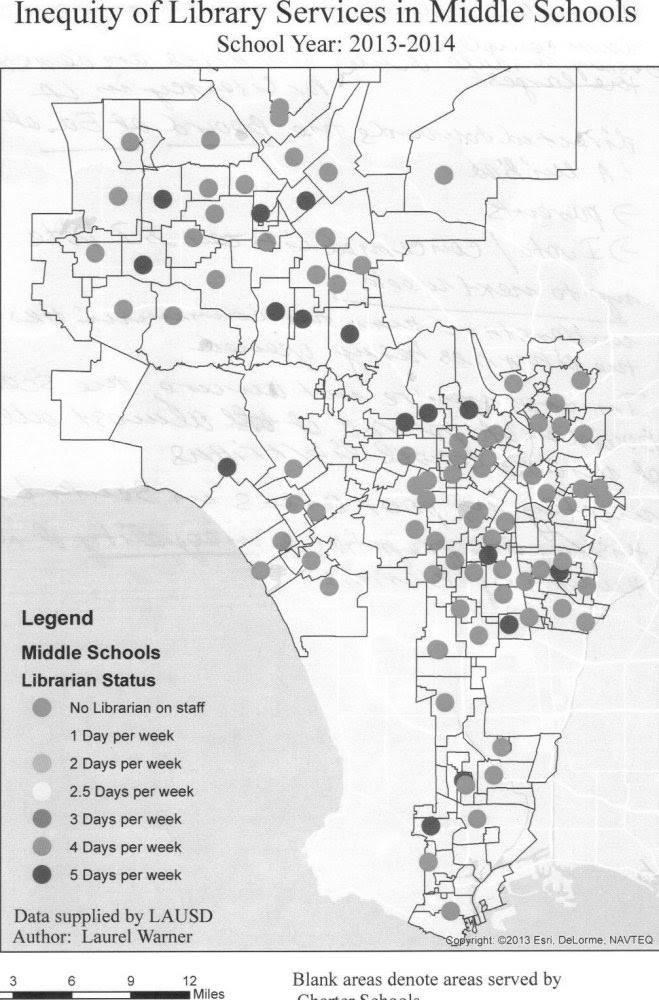 This month the Los Angeles Board of Education will consider a resolution to create a committee to study the current status of school libraries in the district. Mr. Hamrick and other teacher librarians are requesting that middle school libraries be re-staffed with qualified teacher librarians as soon as possible, without bureaucratic delay. Unless urgent action is taken, what was unthinkable to Susan Sontag - to be deprived of the possibility to read and learn - is going to continue to be the reality for thousands of middle school students in Los Angeles.

On the day this was published the Bd of Ed passed the Library Resolution.. A resolution from the board to study the situation opens no libraries – as evidenced by the explosion of Arts and Music Education resulting from last year’s Arts at The Core Resolution,