Beyond the bake sale: PUNK ROCK RETURNS TO ITS ROOTS TO BENEFIT MUSIC PROGRAM AT CHINATOWN SCHOOL 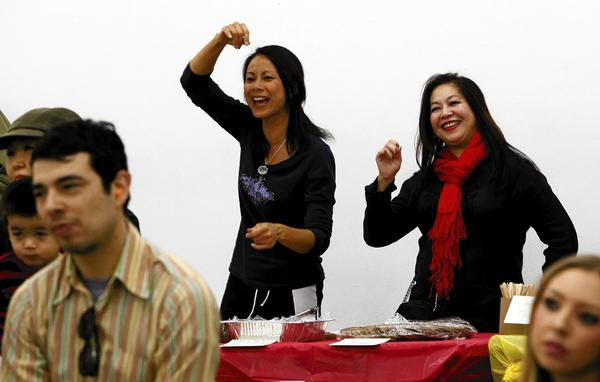 Madame Wong's was having trouble driving business with a regular Polynesian dance floor show. So owner Esther Wong, with some convincing, gave the stage to two punk rock bands.

The late 1970s were a golden time for punk rock in Southern California, but traditional music venues looked down on the budding genre. Restaurants like Madame Wong's and later Hong Kong Cafe gave the music a home and briefly turned Chinatown into a punk destination. They hosted early shows of bands like the Ramones, Oingo Boingo, the Police and Guns N' Roses.

On Sunday, punk rock returned to Chinatown for an afternoon. A benefit concert series called Save Music in Chinatown hosted a second show to raise money for the struggling music program at Castelar Elementary School. Performers including Channel Three, Beastie Boys collaborator Money Mark and the Baja Bugs took the stage at Human Resources, one of the art galleries that have taken root in Chinatown over the last few years. About 100 people of all ages packed the stark, white-walled space, a renovated kung fu movie theater neighboring a pho restaurant.

"There's this tradition of punk rock here, and there's a thriving art gallery scene," organizer Martin Wong said. "Neither group really hangs out in Chinatown, but I knew they would help out if they could."

Sunday's scene was little tamer than 1970s-era Chinatown: the concert kicked off at 3 p.m., and the opening band led with some kid-friendly Beatles covers. The most energetic dancers were at the baked goods table, not in the mosh pit, and the people in the black concert T-shirts were hoisting kids instead of beers. But rock music was still a priority, Wong said.

"We have some teachers here, some faculty and some kids," Wong said during one band's introduction. "I hope their eardrums are still intact after this."

At Castelar Elementary, kids get weekly music lessons and learn to play violin and cello. But this may be the music program's last year because of budget cuts. Principal Cheuk Choi said the music lessons have helped students join choirs, glee clubs and other activities later in life. Some of the children have been talented enough to earn scholarships for lessons at the prestigious Colburn School of Music in downtown Los Angeles. But without the elementary school program, their chances are slim.

"There are really not many opportunities to learn music for kids growing up in Chinatown," Choi said.

"The Troubadour and Whiskey [A Go-Go] would look at punk rockers and see violence and destruction. So we found these alternative venues, restaurants, VFWs, anything," Magrann said.

Esther Wong never really liked rock music. But she saw the crowds and promptly became one of the genre's most ardent promoters. She leaned toward power pop acts, while Hong Kong Cafe hosted the more hard-core punk bands, the ones Wong had lost patience with. The clubs faced each other across Chinatown's Central Plaza, jostling for acclaim and musical acts, a battle of skinny ties and nose rings.

Magrann's band played at Madame Wong's in the '80s, and he says Esther Wong helped bring order to the chaos.

"She'd ask you, are you going to bring in customers today, and you'd say yes," Magrann said. "You'd ask for a case of beer and she'd tell you to get the hell out of the kitchen."

Hong Kong Cafe closed in 1981 and became a gift shop. Madame Wong's closed in 1985 and has been converted to a loft residence. Esther Wong died in 2005. The musicians have changed too.

"These are the same people you were trying to buy beer in downtown L.A. with as a kid," Magrann said. "Now they're 50 years old and holding babies, trying to contribute to something instead of trying to destroy it."

Martin Wong and the other Castelar parents raised about $4,000 at the first concert Dec. 8. They need to raise about $50,000 total to keep the program running for another year