Budget cuts leave about half of L.A. Unified's elementary and middle schools without librarians, and thousands of students without books. 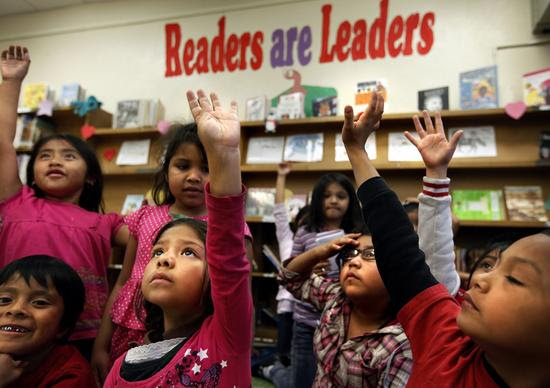 February 23, 2014, 4:39 p.m.  ::  In the sun-filled space at the Roy Romer Middle School library, thousands of books invite students to stimulate their curiosity and let their imaginations soar. There is classic "Tom Sawyer" and popular "Harry Potter," biographies of Warren Buffett and Tony Blair, illustrated books on reptiles and comets.

But the library has been locked. The tables and chairs have been empty. That's because budget cuts in the Los Angeles Unified School District have eliminated hundreds of library aides, leaving Romer's library unstaffed for months at a time over the last four years.

Principal Cristina Serrano said the situation has handicapped students — especially as new state learning standards require them to use more research in their papers and projects.

"The students need access to books; they need guidance on how to use the library for research," she said. "But funding is not easy for us."

Romer isn't the only L.A. Unified library that has had trouble. About half of the 600 elementary and middle school libraries are without librarians or aides, denying tens of thousands of students regular access to nearly $100 million worth of books, according to district data.

The crisis has exacerbated educational inequalities across the nation's second-largest system, as some campuses receive extra money for library staff and others don't. It has also sparked a prolonged labor conflict with the California School Employees Assn., which represents library aides.

Since 2011, the union has alleged that L.A. Unified laid off their members, then illegally allowed parent volunteers, instructional aides and others to do their work at nearly four dozen campuses. The district issued a bulletin last year clarifying that library work can be performed only by those with proper credentials, but the union asserts that violations are still occurring. The issue is set for a hearing by the state Public Employment Relations Board in May.

Franny Parrish, a library aide involved in the union's unfair practice charge, said the issue is not only jobs, but the security of L.A. Unified's $205-million library book collection. Without trained staff to make sure books are properly checked out, returned and refiled, she said, thousands have gone missing.

Aiming to stem the problems, the Los Angeles Board of Education recently agreed to form a districtwide task force to seek ways to improve access to school libraries with more dollars, alternative arrangements and collaboration with other public libraries and charitable organizations. The move was brought forward by board member Monica Ratliff, a former teacher who saw firsthand the boost that school libraries gave her students at San Pedro Elementary in the low-income downtown Los Angeles garment district.

"Children love books, love reading and love information," Ratliff said. "But what's happening now is an inequitable distribution of resources. Some schools make it work and others don't. It's extremely problematic."

L.A. Unified paid for library staff in every school before the recession began in 2008. Today, it provides librarians in high schools but leaves most elementary and middle school campuses to make tough choices on whether to use their limited discretionary funds on library aides, nurses, counselors or other key staff. At Romer, Serrano said, parents' first priority has been a full-time nurse. But she recently secured federal funds to reopen the library next month.

Wide disparities have emerged among the system's seven districts. In the east and southeast Los Angeles area, for instance, 57% of libraries are unstaffed compared to 26% in the district covering south Los Angeles, according to L.A. Unified data.

Of 500 primary centers and elementary campuses, the district still directly pays for library aides at only 80 — those with significant African American student populations — as part of a 2011 civil rights settlement with the federal government.

"Our parents were willing to speak up because we didn't feel it was appropriate to close our libraries and deny access to children," Dobson said. "But it concerns me to realize that we solved the problem for our children but that so many other schools are suffering from this."

The problem is magnified for many children in low-income neighborhoods who live in "print-deficient environments" with few books at home, Ratliff said.

A 2004 study by Stephen Krashen, a linguist and USC professor emeritus, found that children in low-income neighborhoods had access to fewer books or high-quality bookstores and libraries.

Krashen said his research and countless other studies have found that library access can help reduce the effects of poverty on reading achievement. His 2012 analysis of an international reading test in 40 countries found that access to a library with at least 500 books was nearly as strongly related to test scores as poverty.

At San Pedro Elementary, where nearly three-fourths of students are learning English and 85% are from low-income families, the school advisory council decided that developing literacy was so important that they chose to pay for a full-time library aide.

During a recent visit to the school's library, first-grader Marlene Sanchez clutched a popular book about a talking dog, "Martha Speaks," and said her weekly library visits were among her favorite parts of school.

"I don't have a bookshelf at home," she said. "It costs a lot of money and we can't buy books. But I would love to fill a bookshelf with books."

The school uses the library to promote its "million word campaign," which features a computer program that quizzes students on each book read and tallies up their word counts. Last year, 120 of the 750 students hit the mark — an eighth-grade standard — and the school posts pictures every month of its most voracious readers. Despite the preponderance of students not fluent in English, half of those who took state standardized tests last year were at grade level in reading.

"We ask our students to read daily," said Principal Hector Carreno, "and if the library were closed it would be hard for them to do so."