A dispute over the name of a sea pits Japan's economic clout against Korean Americans' growing political influence.

February 23, 2014, 8:57 p.m.  ::  WASHINGTON — It's not the usual question considered in U.S. state capitols: What to call the body of water between Japan and the Korean peninsula?

Virginia's governor is poised to sign legislation that would answer that question. It would require new public school textbooks in the state to note that the Sea of Japan is also referred to as the East Sea in the region. New Jersey and New York are considering similar legislation.

The issue is about more than geography.

It has pitted the economic clout of Japan, whose ambassador hinted that the legislation could cost Virginia foreign business, against the increasing political influence of the growing Korean American population, who regard the use of "Sea of Japan" as a painful reminder of the Japanese occupation of the Korean peninsula.

"I can understand why people might ask why we, at a state level, are meddling with something that is international," said Mark L. Keam, a Korean American member of the Virginia House of Delegates. 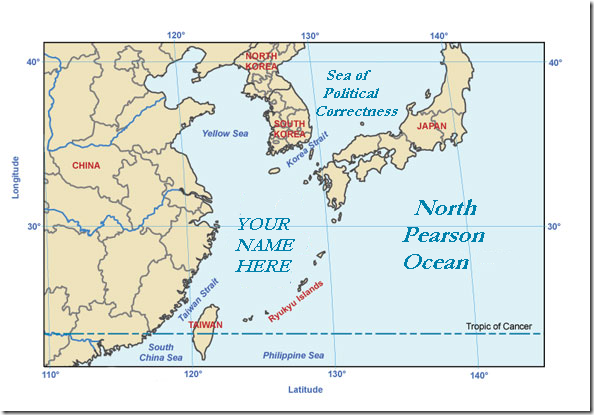 But for Korean Americans, Japan's 35-year colonial rule of the Korean peninsula, which ended in 1945, is a "period that they cannot forget that affects them even to this day," he said. During the legislative debate, he told colleagues that memories of the Japanese occupation still cause emotions to boil up in his mother, who is in her late 70s.

●●smf: This is is far too sensitive an issue for politicians or school boards to settle – let’s just let the textbook companies figure it out. >>

"When Virginia's kids are learning history and geography about that part of the world, they should be taught properly that there are two sides of the story," he said in an interview.

The Japanese government hired lobbyists to try to defeat the bill, and its ambassador, Kenichiro Sasae, warned newly elected Democratic Gov. Terry McAuliffe in a letter that the "positive cooperation and the strong economic ties between Japan and Virginia may be damaged" if the bill becomes law.

Still, there were some dissenters. State Sen. John Miller, a Democrat who cast a "no" vote, said: "This issue is way beyond the scope of the General Assembly of Virginia, and I have grave concerns where this going to lead.... In a year or two, somebody is going to say every time we refer to the Civil War, it's also known as the War of Northern Aggression. Where does it end?"

The actions have been closely watched on the other side of the world, where the sea's name has been debated for decades. It's one of a number of issues that have strained relations between Seoul and Tokyo, along with a territorial dispute over islets between the two countries and lingering Korean wounds — and demands for compensation — over Japan's use of Korean "comfort women" who were forced to work in a network of brothels established by the Japanese military.

After a bill similar to Virginia's measure was introduced in New Jersey, Japan's Chief Cabinet Secretary Yoshihide Suga called it "extremely regrettable" and pledged a "response through diplomatic channels."

On the other hand, South Korean officials have welcomed the Virginia legislation.

Peter Kim, a Korean immigrant living in Virginia, launched the effort to pass the legislation after seeing his son's fifth-grade textbook. Kim had been taught to call the body of water the East Sea. "I was shocked that my son recognized it as the Sea of Japan," he said.

The issue has put McAuliffe in a tough spot. "He has Japanese businesses and diplomats after him over promising the Korean American community this change," said Geoffrey Skelley at the University of Virginia Center for Politics. "At the end of the day, he can't have it both ways. He'll either have to sign it into law and anger the Japanese or veto it and anger the much larger Virginia Korean American community."

A spokesman for the governor said he would sign the bill.

Korean officials contend that "East Sea" was in use for hundreds of years and that "Sea of Japan" superseded it only because Korea was once under Japanese rule.

Japanese officials contend "Sea of Japan" has been used on maps dating to 1602 and dismiss "East Sea" as "nothing but a local name" used only in South Korea.

The National Geographic Society, citing the dispute, decided in 1999 to add "East Sea" below "Sea of Japan" on its maps — in parentheses.

At the U.S. State Department, which seems to want to steer clear of the controversy, officials say: "We encourage Japan and Korea to work together to reach a mutually agreeable way forward with the International Hydrographic Organization on this issue."