IF YOU BUILD IT: "What if you could bring back shop class but this time orient the projects around things that the community needed?"

by Jessica Zack in the San Francisco Chronicle | http://bit.ly/1fnqYvg 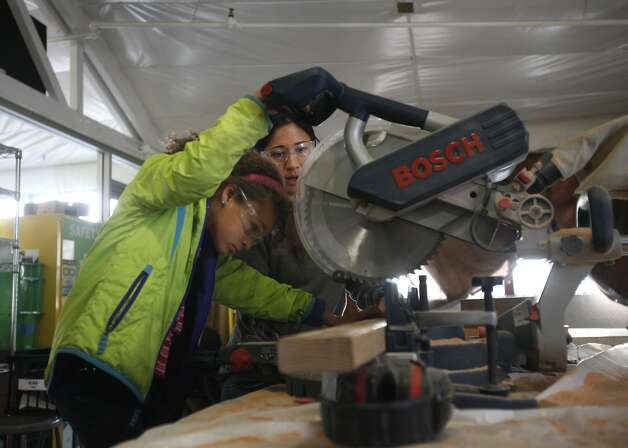 Mikaela James, 9, gains guidance from architect Emily Pilloton while using a miter saw during a class on how to fix things. Photo: Leah Millis, The Chronicle

February 23, 2014   ::  In a clip from her 2010 TED Talk that opens the new documentary "If You Build It," Oakland architect and teacher Emily Pilloton asks, "What if you could bring back shop class but this time orient the projects around things that the community needed?"

Out with the trivets and birdhouses from old-time high school woodworking. In with a new kind of conscientious, youth-led "design-thinking" curriculum that Pilloton described in a recent interview as "students themselves determining what could make their community better and saying, 'I'm going to fix that. I'll build it myself.' "

That desire to infuse public education, as well as the design industry at large, with a sense of engaged citizenship and real-world purpose is at the heart of "If You Build It," as well as central to Pilloton's recent experiences teaching construction know-how to students at the Realm Charter School in Berkeley.

Directed by Patrick Creadon, "If You Build It" follows the 2010-11 school year that Pilloton, 32, spent teaching an experimental design workshop to high school juniors in one of North Carolina's poorest counties. Called Studio H (for its focus on "humanity, habitats, health and happiness"), the course was an offshoot of Pilloton's nonprofit Project H, a hybrid design firm/advocacy group she founded in 2008 to promote and teach socially engaged design.

In the film, architects Pilloton and (her former boyfriend) Matthew Miller ignite in their students a passion for hands-on problem solving. Yet despite the culminating class project of an outdoors farmers' market and enthusiastic response from the residents of Windsor, N.C., the local school board withdrew financial support from Pilloton's innovative program.

"I see the film as a call to action," says Pilloton, who landed back in the Bay Area energized to instill in students here, particularly young girls, "the feeling that they're capable of more than they realized."

At a recent after-school I Can Fix Anything class for fourth-grade through eighth-grade girls at Realm Middle School, Pilloton oversaw 10 girls making benches from scrap wood.

"Some girls start the class shy or hesitant, but I've been floored by how quickly they will literally grab the welder out of my hands," says Pilloton, who grew up in Kentfield and received her architecture degree from UC Berkeley. "There is something powerful about using these intimidating tools and developing an irreverent confidence. I can see it in their eyes. It's like, 'I just used metal, I dare you to tell me there is something I can't do.' "

"I love being here because you can build whatever you can think of, without anyone telling you exactly what to do," says 9-year-old Azusa James, pushing up the arms of her glittery sweatshirt and putting on safety goggles before picking up an impact driver.

This summer, Pilloton will offer her second annual session of Camp H for girls at Realm.

Pilloton says she feels a special connection with this age group of girls, remembering growing up in Marin with a Chinese mother and French father and "feeling like I didn't belong anywhere."

Discovering a love of architecture "was that perfect outlet for being a happy nerd about everything - math, material science, the environment, geography. Architecture is the one thing that combines the right and left sides of the brain seamlessly."

A self-described "contrarian" who is "not at all good with authority," Pilloton became disillusioned with conventional approaches to design as a student and then as a store architect for a global retail clothing company. "I just couldn't have another three-hour meeting about what doorknob to spec," she says.

She walked away from corporate work after a few years and launched Project H from her parents' dining room table with $1,000 in savings.

The core of Pilloton's design philosophy - evident in her teaching (all Studio H lessons and project plans are available for free online at www.projecthdesign.org/toolbox) and in her 2009 book, "Design Revolution: 100 Products That Empower People" - is a commitment to "build things that actually make the world better for people in some way."

"The projects are completely student-driven. To me, that's the best way to do community-based work. I have a designer's skill set to offer, but the what and the why have to come from the kids themselves."

…when you watch Pilloton’s talk, substitute the word “urban” for “rural”. They are only words, let’s not be limited by them..

trailer for IF YOU BUILD IT

If You Build It: Opens Friday at Bay Area theaters.

For more information  go to www.ifyoubuilditmovie.com.