●●smf: I would say half-as-much Arts Ed to twice-as-many students is two steps in two wrong directions! (When you multiply fractions you get less.) 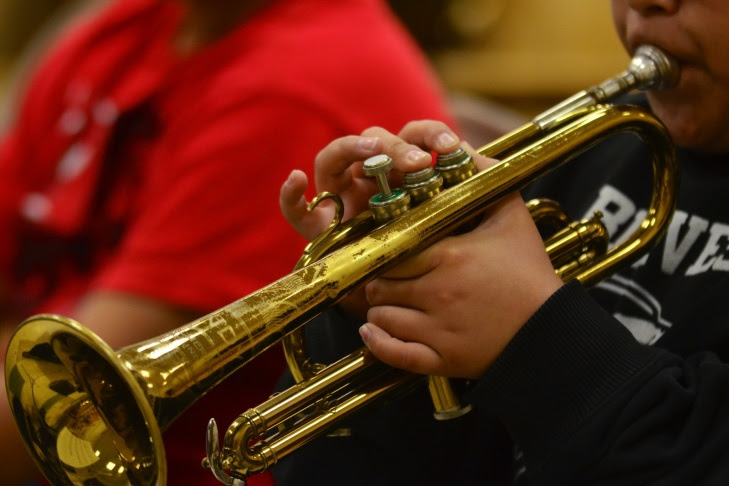 February 26th, 2014, 5:01am  ::  Los Angeles Unified School district is proposing to cut the time that elementary students spend learning how to play musical instruments from a full school year to one semester, to serve more students across the district.

A plan by the Los Angeles Unified School District to cut the time elementary school children are taught orchestra in half is angering teachers - many of whom learned about it only after KPCC reported on the arts budget, which was released unexpectedly at a committee meeting last week.

"I think this is just such a travesty," said Kristin Vanderlip Taylor, a traveling visual arts teacher for elementary students at two schools in the district - Sylmar Leadership Academy and Roscoe Elementary. "I mean, honestly, it's not in the best interest of the students."

Traditionally, schools that get a musical instrument teacher get him or her for the full school year. Now district 0fficials want to cut that to one semester to reach more students. Each of the district's 32 traveling orchestra teachers would serve 10 elementary schools a year starting in the Fall, according to a district report.

The announcement came during a Budget, Facilities and Audit Committee Meeting on Thursday attended by a few dozen people.

L.A. Unified officials did not respond to a request for comment Tuesday, but during the committee meeting last week, the head of the district’s office of curriculum and instruction said it costs about $65,000 to $80,000 to equip a typical elementary school with a set of instruments.

"We are not proposing to actually increase [the number of instruments] because that would actually raise the budget by $13-16 million," Gerardo Loera said. The district proposes increasing the arts budget by $15.7 million by the 2016-2017 school year, in line with a school board mandate.

In Oct. 2012, the school board unanimously approved a motion to make arts a core subject.

"What core academic subject is only taught for one short period once a week for only one semester and then stops?" asked Michael Spector, an arts teacher who teaches music at five different elementary schools in district.

He said news of the proposal to cut the year-long orchestra program to one semester came as a complete surprise.

The newly released draft budget also showed how officials want to spend the new arts money. A huge chunk of the increase - $9.8 million - would go to hire 101 "arts integration" teachers to show classroom teachers how to integrate arts into subjects like math and history.

Many teachers contacted KPCC after the news broke, expressing doubts about that proposal.

"I think it's another drop in the bucket approach instead of giving more in depth time with individual educators to school sites," said Mary Brown, a traveling visual arts teacher who instructs elementary students at four schools in the northeast San Fernando Valley.

Russ Sperling, president of the California Music Educators Association, which represents more than 7,000 music teachers in the state, told school board members Steve Zimmer and Monica Ratliff in a letter Tuesday the proposals are "a step in the wrong direction."

"[I]t appears as though the district has no desire to provide an education in the arts with quality as a consideration," he said in the letter.

Sperling wants the district to instead expand certified arts specialists and use arts integration strategies as supplemental.

The district's new arts plan was released last summer without financial details. Those were due July 1, but the date came and went without a budget. School board member Steve Zimmer set another deadline for December - and officials missed that one, too.

In January, Danielle Brazell, the executive director of the arts advocacy group Arts for LA, wrote Superintendent John Deasy asking for the budget. She got no response. Arts for LA then launched a letter writing campaign rallying parents to demand a budget for the arts plan.

At a school board meeting Feb. 11, the board agreed that a budget should be presented in April.

On Thursday, the draft budget was slipped into a meeting of the school board's budget committee meeting following a request from board member Bennett Kayser, who chairs the committee.