L.A. SCHOOL OFFICIALS BARRED FROM ACCESS TO CURRICULUM FOR iPADS 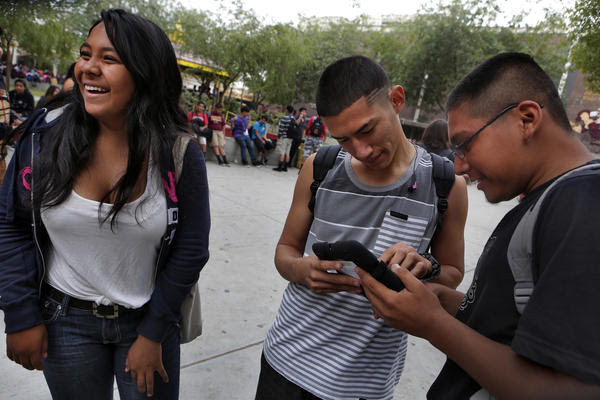 Bianca Gomez, left, Humberto Salazar and Doroteo Cruz are happy to receive iPads at Theodore Roosevelt High School, as part of the first phase of L.A. Unified's iPad rollout. The district approved Tuesday the next phase of the plan, which includes distributing iPads to students at 38 more schools. (Irfan Khan / Los Angeles Times)

February 6, 2014, 10:19 p.m.  ::  Los Angeles school officials have failed for now in their efforts to get full access to a digital curriculum that the school system purchased in June.

The curriculum, developed by Pearson for use on district iPads, is off-limits because Pearson is likely to bid on a separate contract with the L.A. Unified School District, and district rules limit contact between a bidder and the district.

Some of the curriculum is available for use on the devices, but officials have wanted to see all of it.

The issue came up at a Thursday meeting of the district’s technology committee, headed by school board member Monica Ratliff. She has attempted to get access to the curriculum for months.

“It just seems outrageous that we would be unable to see the curriculum no matter how hard we try,” Ratliff said. “It just seems that something is wrong.”

A so-called Cone of Silence limits communications during the competition for a contract “to ensure a level playing field with an open and competitive process,” according to district documents. The new competition is to decide which vendors will provide devices and instructional materials for laptops. That bidding process begins Friday.

As of Friday morning, Ratliff will be unable to contact Pearson — or even speak publicly about the Pearson curriculum in any way — until a vote to approve the laptop contract comes before the Board of Education, said district lawyer Greg McNair.

Ratliff has tried to review the curriculum for months. It was packaged into a deal for iPads that is costing the district $768 per device. The district’s goal is to provide a portable computer to every student, teacher and school administrator as part of a $1-billion-plus technology program.

Initially, Ratliff was thwarted because the curriculum wasn't complete. This was not a violation of the district’s contract with Pearson; L.A. Unified agreed that the curriculum could be completed at a later date.

But the situation did frustrate Ratliff, other officials and members of the public when questions arose about the Pearson materials and the process that led to the contract.

Recently, Pearson announced that it had completed the curriculum but said it still could not provide it without the permission of Apple, the maker of the iPads and the lead vendor on the contract. This permission was not immediately forthcoming.

More recently, Apple and Pearson have talked of scheduling issues that seemingly have made it impossible for them to coordinate successfully with Ratliff and her committee. Now that contact is shut down entirely, possibly for months. By then, Ratliff's committee will be out of operation. It's last scheduled meeting is in March.

Ratliff could possibly obtain copies of Pearson materials from the state, which approves curricula, but she still would not be allowed to say anything about them. She said the situation has seriously hindered her ability to provide oversight of the project.