L.A. UNIFIED STUDENTS PITCH IN TO HELP THE HOMELESS

Some 300 students from 36 high schools take part in a district-wide volunteer day at shelters. 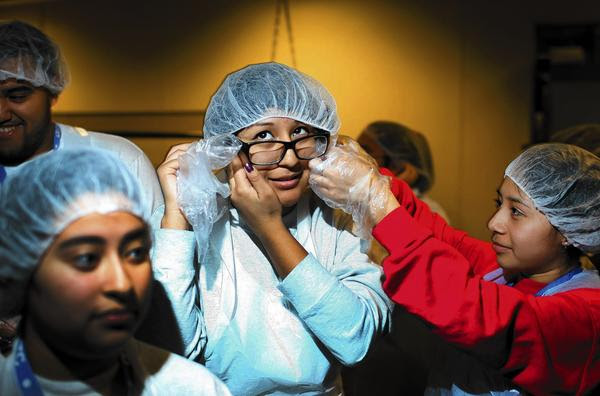 Alondra Morales, 17, of Los Angeles High School, has her hair tucked underneath a hair net by schoolmate Jessica Nibra, 17. The two were preparing to work in the kitchen at the Midnight Mission on skid row in downtown L.A. (Rick Loomis, Los Angeles Times / February 8, 2014)

"Chocolate! Chocolate ice cream just for you!" the 18-year-old hollered. "Who wants some?"

On Saturday, the high school senior joined 300 students from 36 high schools in a district-wide volunteer day aimed at helping the homeless. Children were bused in to help at six shelters, from Pacoima to Bell to downtown Los Angeles.

"Thank you, thank you!" one homeless woman told the group, gratefully. "You are God's gift."

Cerritos worked the front of the line, scooper in hand. He said the day was eye-opening.

"It makes me see that we're all the same," Cerritos said. "And if we all help just a little, it will make a huge difference."

Many of the youth had never set foot in the 52-block area where more than 1,000 homeless people sleep outdoors each night. They looked on thoughtfully at the tent encampments, rickety grocery carts and disheveled faces. Making eye contact was often tough to do.

"Just looking at them you can tell there is so much need and they're in so much pain," said Jessica Nibra, 17, of Los Angeles High School.

The outreach event was organized by Beyond the Bell, an after-school program of the Los Angeles Unified School District. Each year, students will choose a social issue to focus on and rally for a day of service, executive director Alvaro Cortes said.

"We hope they will return from experiences like this and feel empowered," he said. "That they'll ask themselves, 'What can I do in my community to make an impact?'"

As 44 students from five different schools made their way through The Midnight Mission downtown, the center's guide Sean Oney gave them some advice:

"The best thing you can do today for anyone you see is smile."

He led them past the mission's outdoor courtyard, where dozens congregate on the cold concrete, past the gym, the library and the television room. Then the former electrician from Bishop, Calif., shared with them his personal story.

He had a stable job and a good life for decades, he said. Then he developed serious spinal issues. In time, he found himself without a home and addicted to meth.

"One thing I want you to understand," he told the students, "is that anyone can become homeless."

Some students, like Angie Orellana of Los Angeles High School, understood that firsthand.

As she walked past the communal room and saw the dozens of tired, worn-out men hunched in front of the buzzing television, she couldn't help but think of her father.

A few years back, she said, he became homeless for several months and had to sleep in his car. He also struggled with substance abuse.

"I can relate to these men," Orellana, 18, said. "I also can't imagine what my dad went through."

Many of the students vowed to return to the shelters and to encourage friends to raise money for the area.

"We always focus only on ourselves," said Erica Hernandez, 15, of Miguel Contreras Learning Complex. "But I have food, I have a roof, I have a place to live."

She doesn't have a car, but Hernandez said she plans to come to skid row every week from now on to help.