It's time to have a conversation about the issue before we find that the executive branch, or even the entire federal government, has become our national school board. 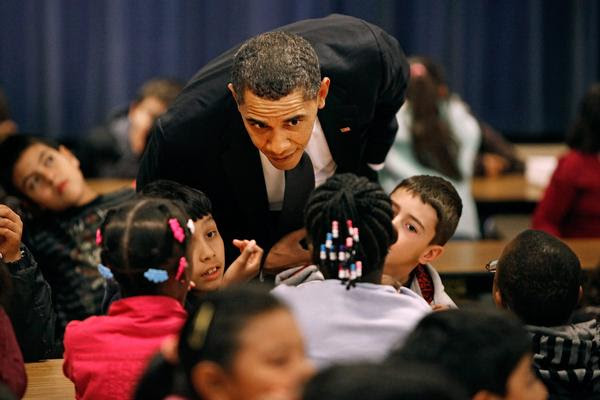 Decades of federal education reforms have resulted in a massive reshaping of the American education system. Above: President Obama asks third and fourth graders what they are reading during their lunch period at Viers Mill Elementary School in Silver Spring, Md. (Chip Somodevilla / EPA)

January 24, 2013  ::  In December, California's application for a waiver from provisions of the No Child Left Behind Act was denied by the U.S. Department of Education. This, we were told, was because California had failed to embrace the federal department's reform agenda, especially on issues of evaluating teachers.

The denial is disturbing for what it reveals: namely, that the American education system is being reshaped in a truly fundamental way, and with little debate. National policymakers now behave as if they believe their role in making education policy ought to be much the same as that of the states in setting goals and standards, creating accountability systems, defining teacher quality, determining strategies for producing high-quality teachers and improving low-performing schools. Left unresolved, the conflicts this creates about who is in charge are likely to worsen.

Today's situation represents a sharp departure from previous policy. Historically, the federal government's role was to aid, assist, prod and push schools, districts and states. But the key word was always "aid." From the 1950s to the 1990s, there was never a question about who was in charge of schools, and it was not the federal government. The feds avoided interfering in any important way with the design of a state's education system unless issues of civil rights were involved, and in those cases, it was generally the courts rather than the executive or legislative branches that sparked the intervention.

Over the last few decades, the federal role in education has undergone a massive transformation. This process, which started during the George H.W. Bush administration, has continued under Presidents Clinton, George W. Bush and Obama.

The increasing federal involvement was initially fueled by frustration in Congress and the executive branch about a lack of improvement in student achievement, despite decades of increases in state and federal spending on education.

Building on the work of George H.W. Bush's administration, which had pushed for more clarity in education goals, Bill Clinton went further, calling for explicit standards for student academic performance. Building on those standards, George W. Bush and a bipartisan coalition followed by passing the draconian No Child Left Behind legislation, which employed standardized tests to measure whether goals had been met. Under the terms of No Child Left Behind, schools that didn't make adequate progress toward the goals defined by the standards and the tests would be punished.

To avoid sanctions, many states simply lowered their standards. That led the Obama administration, during the height of the fiscal crisis, to make certain federal education funds contingent on states adopting national standards for student performance.

His administration also redesigned the accountability system to focus less on schools, as it had under No Child Left Behind, and more on teachers. The idea is to improve teacher quality by identifying and getting rid of teachers who fail to sufficiently raise student performance on standardized tests. The Obama administration has also pressured states to allow more charter schools and to institute merit pay for teachers.

The result of these decades of federal education reforms has been a massive reshaping of the American education system. Its key features now include national standards aligned with national tests, a push for evaluating (and rewarding or punishing) teachers based on their students' test scores, and a strong emphasis on marketplace pressures, including charter schools, to ensure the survival of successful schools — and the failure of weak ones. Some of these reforms have been shown to be effective, others have shown mixed results or have little research to support their use.

In the early years of this process, Congress and the executive branch largely agreed on the agenda. More recently, since the onset of the fiscal crisis, the executive branch has acted independently to implement its agenda without the agreement of Congress. One way it has done so is by granting waivers from the requirements of No Child Left Behind to states that embrace the administration's agenda. While Congress gave the secretary of Education authority to waive provisions of the law, it is unlikely lawmakers envisioned that the authority would be used in this way.

The U.S. Constitution leaves responsibility for education policy to the states. In recent years, however, the federal government has ignored the framers' intention. The changes have been instituted without any significant debate about the role of the federal government in elementary and secondary education. And now, the executive branch alone is setting education policy without the active participation of either the states or Congress.

No nation has reached the top ranks of education performance without clearly defined roles for the national government and the state or provincial levels of government. In the United States today, the roles are ill-defined and overlapping.

There are many options for allocating responsibilities for education policymaking, and it is by no means obvious what the right path is. But it is time to have a conversation about the issue before we wake up one day to find that the executive branch, or even the entire federal government, has become our national school board.

Marc Tucker is president and CEO of the National Center on Education and the Economy, a Washington-based nonprofit think tank. He is editor of Surpassing Shanghai: An Agenda for American Education Built on the World’s Leading Systems (Harvard Education Press, November 2011) and blogger for EdWeek.org. This piece also appears  in the Hechinger Report, an education news outlet based at Teachers College, Columbia University as How the executive branch is reshaping education ― with little debate | http://bit.ly/UZ5pEx