SECOND PHASE OF L.A. ARTS FUNDRAISING PLAN BEGINS: 'Art Matters' campaign has brought in more than $750,000 in the last three months for arts in the public schools. 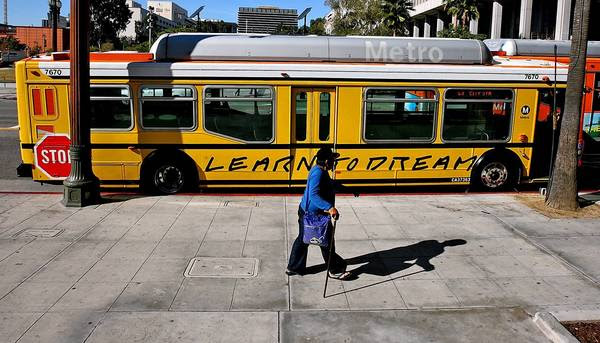 A pedestrian passes a Metro bus that has been painted to look like a school bus as part of the "Arts Matter" campaign. (Christina House / For the Los Angeles Times)

January 9, 2013   ::  Standing on the steps of City Hall with three major artistic institutions in their line of vision, members of the Los Angeles Fund for Public Education launched the second part of their "Arts Matter" campaign Tuesday aimed at raising money for arts programs in the public schools.

Los Angeles Unified School District officials have struggled to maintain arts programs despite severe budget cuts over the last several years. The L.A. Fund was created to help the district retain those classes with a fundraising goal of $4 million.

"Here in the world's creative capital we should ensure all of our students receive a comprehensive, integrated arts education," said Megan Chernin, who formed the group with L.A. schools Supt. John Deasy in 2011. "Creativity is the engine that drives the Los Angeles economy."

The fund has raised more than $750,000 in the last three months with support from such Southland-based companies as Mattel and such entertainment titans as George Lucas and James Cameron. Conceptual artist John Baldessari created wraps that turn L.A. Metro buses into yellow and black school buses, with the slogan, "Learn to Dream / Aprende a Soñar" emblazoned on both sides.

"Certainly the arts community has been vocal saying we can't be a district without the arts," said L.A. school board President Monica Garcia. But, "we lost $2.7 billion in district funding."

Chernin asked the public to contribute financially and with their stories of how arts education helped shape their lives. With the donations, the group will create a curriculum that incorporates arts education into other core subjects such as math and science and teacher development.

"I think we owe it to the parents to bring this back to the schools," Chernin said, looking out at Walt Disney Concert Hall, the Dorothy Chandler Pavilion and the future site of the Broad Museum. "We just needed to rally the troops in the city."

The campaign's initial launch in October featured work by artist Barbara Kruger on buses and billboards around the city with blocks of words; one said: "Education is the ability to listen to almost anything without losing your temper or self-confidence."