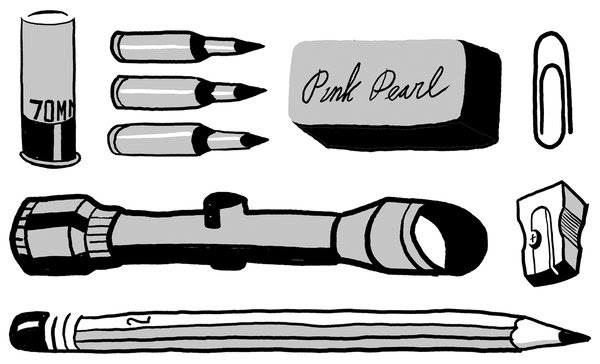 Phase One of our plan to defuse that P.R. disaster in Newtown has had great results. Your performance at the news conference and on the weekend talk shows was masterly. “The only thing that stops a bad guy with a gun is a good guy with a gun.” It gave me goose bumps! We have answered the old bleeding-heart fallacy (guns are the problem) with a bold Second-Amendment response (guns are the solution). “Good guys with guns” (cc’ing Legal to see if we can TM) is undoubtedly the best slogan we’ve come up with since “Guns don’t kill people ...” and “If guns are outlawed ...” While the old slogans simply changed the subject, the new approach is positive and proactive. We’re actually for something now.

The polling team and psych consultants love that we have made “more guns in schools” a serious subject of mainstream discussion. We’re particularly proud of the idea that advertising a “gun-free school” is an open invitation to homicidal crazies. Take THAT Michael Bloomberg! For years we have owned the issue of freedom. Now we stand a good chance of owning the issue of safety.

And it should not go unmentioned that this whole project has been greeted with appreciation by our friends in the manufacturing and sales community. First, by reviving the fear of confiscation, we helped generate a nice little just-in-case pre-Christmas bump in firearm sales. And of course more guns in schools will mean a significant boost in demand. I have the Development team stepping up its outreach to a grateful industry.

Still, the issue has not receded as quickly as we anticipated. As you know, Research estimates that the mean lapsed time from a high-body-count firearm event to baseline apathy is nine days. Yet this particular event has continued to receive media attention through the Christmas season, the clamor on the pro-disarmament editorial pages continues, and the polling metrics continue to be unfavorable. A few of our friends on the Hill are wobbly.

Therefore I think we need to gear up for Phase Two, with the option of executing early in the new year if the public fails to return to its standard level of indifference.

To recap, Phase Two is tentatively called Arm Our Kids — A.O.K. — and its objective is a comprehensive K-12 carry program. If an armed guard in every school is prudent, how much more secure will we feel to have a Smith & Wesson in every cubby? We all know (as the media scolds keep pointing out) there was an armed sheriff’s deputy on duty at Columbine High School the day Harris and Klebold committed their mayhem; but he was eating lunch. So let’s up the ante to full coverage, from toddler to teen, from assembly to dismissal. Even the most deranged killer will think twice about entering a classroom knowing any of those adorable youngsters could be a licensed, trained, locked and loaded, Glock-packing Good Guy.

I know a few board members have expressed concern that this campaign could encounter significant backlash, and not just from the nanny-state brigade. But it is the logical evolution of our safety argument, and it appeals to a core American value, individual responsibility. I anticipate that with our usual combination of messaging and political muscle, we can enroll a significant number of school districts. But even if we fall short on penetration, A.O.K. will give the chatterers something to chatter about besides ammo clips and the gun-show loophole.

Research has promised data by next week on how many jobs would be created by a comprehensive program, including not only ramped-up firearms and accessories production but also new demand for trainers, shooting-range operators, and engineers to develop new lines of weapons for little fingers.

Here are a few other issues for consideration:

Spokesman. There will never be a frontman to match Charlton Heston, God rest his soul. Former Congressman Asa Hutchinson, as the head of our National School Shield Program, has struck just the right note of smooth, always-on-message reasonableness. The man could sell snake oil to snakes. But for the next phase we need mom appeal. Is Sarah Palin too obvious? Maybe one of the doctor-moms on “Grey’s Anatomy” — Hey! The pregnant one!

Curriculum. We will be presenting this as not just a safety program but an educational opportunity, with training to improve situational awareness and quick judgment. (Can we get that “Blink” guy to do a testimonial?) Also, I am sure Rick Perry would happily tell the Texas State Board of Education to work with us on a line of animated textbooks that restores firearms to their proper place in American history and integrates issues like caliber and muzzle velocity into the math curriculum.

Merchandising. Marketing is confident that we will have no problem migrating the boy market from toy guns and video arcades to live fire. The Cub Scouts already promote BB-gun skills. We’re checking to see whether they’re willing to expand into pistols and rifles, perhaps with a Good Guy merit badge. But much remains to be done on the girl front. I’m attaching the early test-market results from the “My Little Colt” product (comes in a rainbow of colors, but pink is still the clear winner). We’ve been in touch with half a dozen makers of bulletproof backpacks, including one with a Disney Princess line. We’ve also scheduled meetings with a few more companies to propose branding opportunities. How about a “Little House on the Prairie” holster line? Or, from the makers of the Easy-Bake Oven, a line of Easy-Cast home bullet-making kits?

Military tie-in. The Pentagon has not been terribly responsive to our proposal to embrace this as a boon to the volunteer military, but we will continue to work that angle. Meanwhile, I’ve had a strange call from someplace in Africa — is there a country called Sergio Leone? — where they claim to have had a whole ARMY of kids who really did the job. We need to check that out.

Endorsements. A board member suggested we align ourselves with Mike Huckabee, who, as you know, linked the Newtown killings to the abolition of prayer in schools. The idea would be to add a little First Amendment kick to our Second Amendment campaign — first they get rid of God, then they get rid of guns, or something like that. Worth exploring. Although, between us, personally I find these religious zealots a little creepy.