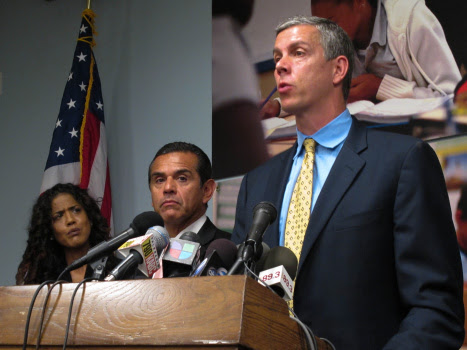 January 4th, 2013, 3:07pm  ::  The U.S. Department of Education sent a letter on Friday to the president of California’s Board of Education denying the state’s request to be exempted from the most onerous requirements of the federal No Child Left Behind law.

The 11 year-old law compels states to improve public school student proficiency in English and math to 100 percent by 2014. Failure to meet increases along the way to that deadline target schools for improvement, total overhaul, and the ability for parents to enroll their kids in higher performing schools elsewhere.

The law measures proficiency solely on standardized test scores. There’s widespread consensus among educators that the 100 percent goal is unattainable. California evaluates schools on student test scores, too, but strives for single digit improvement year after year instead of meeting 100 percent proficiency.

Federal officials announced in 2011 that states could seek an exemption from No Child Left Behind’s proficiency goals and reporting requirements, and some federal funding rules if states adopted reforms. California has outright rejected one of them: using student test scores in teacher evaluations.

In the two-page letter, U.S. Secretary of Education Arne Duncan cited the four reforms his department sought in order to grant a waiver. The state's application didn’t “indicate that California intended to meet that high bar,” he said. Thirty three other states have been granted waivers. Ten other requests are pending.

The waiver would have given the state more flexibility in how it spends federal funds, some of which are now tied to No Child Left Behind requirements.

The denial was expected. In a December 21 letter, the President of the State Board of Education and the Superintendent of Public Instruction told California school district superintendents it was coming.

In an interview with KPCC a few days later, State Board of Education president Michael Kirst said federal officials were holding firm on getting states to adopt a set of education reforms.

“I think that they don’t want to set up a precedent where anyone can get out of total waiver criteria,” Kirst said. At the same time, he said the numerous waivers make the law "null" and has advised districts to focus more of their attention on state standards.

January 4, 2013 2:17 PM  ::  U.S. Secretary of Education Arne Duncan has put in writing why he's rejecting California's request for a waiver under the No Child Left Behind Act.

It's quite simple, really: You didn't follow all of our rules.

In the letter to California Board of Education President Michael W. Kirst, dated today, Duncan acknowledges that he has the power to grant a waiver if it will "increase academic achievement and improve the quality of instruction for students."

"I believe that a State must agree and be prepared to take on the rigorous reforms required by all of the principles of ESEA flexibility in exchange for that waiver," Duncan wrote.