from the LA Times

smf: “Satire,’” Lenny Bruce says, “is tragedy plus time. You give it enough time, the public, the reviewers will allow you to satirize it. Which is rather ridiculous, when you think about it.”

I enjoyed Daniel Akst's satirical Op-ed in the Times last week  – but it made me uneasy- my pleasure was guilty. Not enough of Bruce’s’ ridiculous tine had passed. Of course my discomfort showed the art of it.

Voltaire said he only made one prayer to God – and that was that his enemies should appear ridiculous. He was forever thankful that his prayer was answered.

A petard is a weapon used to breach the walls in a siege – and the NRA is surely hoist upon theirs.

What's missing from the typical kindergartner's backpack? A pistol. 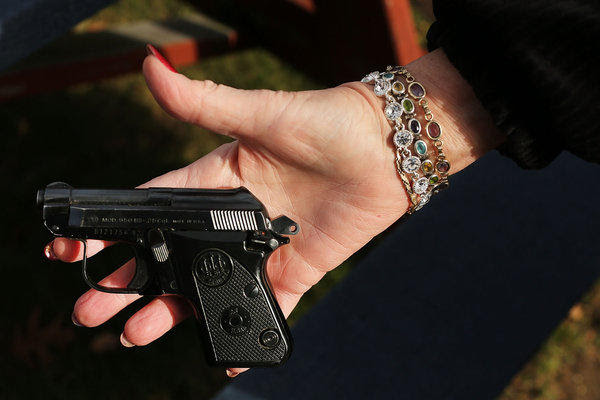 December 28, 2012  ::  Here we go again. After the tragic school killings in Newtown, Conn., the leader of the National Rifle Assn. offers a perfectly sensible proposal to put cops with guns in every school — and people jump all over him.

But the only problem I can see with the NRA's proposal is that it doesn't go far enough. For some reason nobody in this country is willing to admit the obvious, which is that the poor helpless kids in that school could have helped themselves, if only we'd let them.

The time has come to get over our squeamishness and arm the children. If those kids in Connecticut had been allowed to bring firearms to school, it's doubtful anyone would ever have attempted the kind of assault that so tragically victimized them. If anyone did, the combined firepower of 20 or more armed elementary school pupils in a single classroom would put a stop to it, and far more effectively than a single dozing constable summoned from the opposite end of campus.

Of course, you can't just give a bunch of kindergartners firearms. They will need training, and the Newtown killings make plain just how deficient our schools are on this score. In most of America you can't graduate without meeting certain requirements in math, physical education or even a foreign language. But every year, our schools turn loose literally millions of kids lacking the faintest clue about how to engage in armed self-defense. Without these skills, so fundamental to the sustenance of democracy, our young people are defective citizens.

We make vaccinations mandatory for most children; why not firearm training? To be admitted to kindergarten, a child would have to demonstrate basic proficiency with a pistol. After that, no child should be able to advance a grade without meeting certain weapons milestones. And any parent who sends a child to school unarmed should have to explain that action to the child welfare authorities. When I was a boy, our teachers checked to see that we'd brought a handkerchief to class. Why not check for handguns? Think of the possibilities for show and tell!

A few selfish families — pacifists and their ilk — will no doubt be exempted. They won't mind that their children thus become free riders, sheltering under the protection provided by other kids who pack heat every day in their lunch boxes.

Not to worry; I'm convinced that enough red-blooded Americans will show up armed every day to stop any future madmen dead in their tracks. Arming the children would pay a special dividend too: an end to bullying, since even the smallest, most socially awkward child can put a bullet between the eyes of his or her tormentor if properly armed.

And then, of course, there are the teachers. It's simply unconscionable that these government-salaried educrats should ever enter a school building unarmed. As one writer observed in the online forum Washington Times Communities, "How different this could have been if, instead of discouraging guns on school property, we welcomed them heartily, accompanied, of course, by strict and proper licensing. How different if the report of the gunman on campus had stirred several teachers or staff members to whip out their own weapons and fire before the masked killer had his way with them."

Arming teachers could have pedagogical benefits as well, working wonders for school discipline.

Surely even the most demented advocates of gun control must see that, with nearly 300 million privately owned firearms already in circulation, no anti-gun legislation can protect the nation's schoolchildren from them. Just as the answer to offensive speech is more speech, the answer to a firearm is another firearm — or a couple dozen, which is about how many should be in the average classroom.

As an American, I'm not troubled by the ban on school prayer nearly as much as I am by our refusal to give our children a prayer of defending themselves. Many states already allow concealed firearms on college campuses. Let's act swiftly to give our precious babies the same chance at life that armed collegians enjoy. If we fail to do so, the blood of future unarmed victims will be on our hands.

letters to the editor of the LA Times | http://lat.ms/RtbDgS

Daniel Akst's satirical look at heaven on Earth as imagined by the National Rifle Assn. leaves out one key issue: Five-year-olds can surely fire a gun and kill someone, but today's handguns are much too bulky and heavy for anything approaching marksmanship.

This opens an entirely new market to gun manufacturers and retailers: Gats for tots, new product lines made for tiny hands accompanied by still more lines for adolescents. How about a few models for the Social Security set? How about guns with built-in laser pointers, made of lighter material that will enable fuzzy-visioned old-timers to sling lead like they were teenagers again?

Both economic and educational opportunities abound with this brilliant idea to arm and train school children to shoot. Early gun inculcation might include gun shapes on mobiles above cribs as well as pretty gun designs on Mommy's and Nanny's aprons. More water pistols in cheery colors as well as backyard mini-target ranges will be in order.

School curricula can be revamped and still adhere to the No Child Left Behind law. Cross-curricular opportunities that include literature, history, decorative arts and physics, to name a few, will call for revised textbooks.

Vocational education courses will return to high schools. Some students will need after-school tutoring, possibly from war veterans, while others will try out for varsity tournament teams. Meanwhile, teachers can go to staff development meetings for raising students' sharpshooter test scores.

In all, this could be a splendid solution to current fiscal and educational conundrums.

Akst forgot an important benefit to arming schoolchildren with guns.

The NRA will leap at his suggestion and, in collusion with the gun manufacturers, will design kiddie guns with magazines capable of holding at least 100 rounds so the little ones can be sure of eventually hitting the targets they are aiming for.

Thanks to Akst for making me laugh out loud, although I'm laughing with tears in my eyes.