The recent purchase of the Colt rifles draws criticism and sparks an effort to ban such weapons on school campuses. 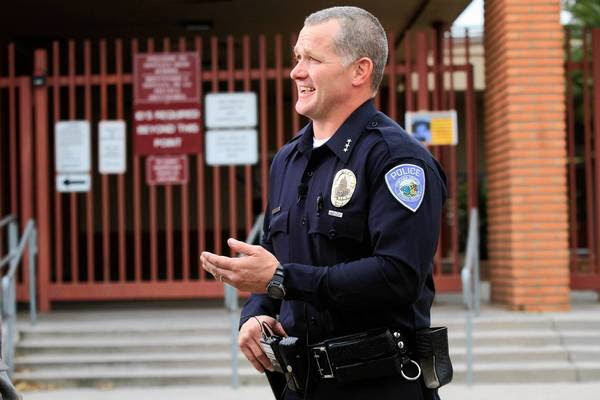 January 23, 2013, 7:26 p.m.  ::  Police officers in the Fontana Unified School District were armed recently with semiautomatic rifles, drawing sharp criticism and sparking an effort to ban such weapons on school campuses.

The Colt military-style rifles, which cost about $1,000 each, are kept in safes when officers are on campus and will be used only in "extreme emergency cases" like the massacre in Newtown, Conn., Supt. Cali Olsen-Binks said.

The district purchased the rifles in October and received them in December, before the tragedy in Newtown, where a gunman killed 26 people — 20 of them children — at an elementary school. The shooting sparked debate on whether armed school guards could prevent these types of tragedies.

The purchase was not spurred by a specific event, Fontana Unified School District police Chief Billy Green said. The rifles are designed to increase shooting accuracy and provide the 14 officers with more effective power against assailants wearing body armor, Green said, adding that those capabilities are necessary for officers to stop a well-armed gunman.

"If you know of a better way to stop someone on campus that's killing children or staff members with a rifle, I'd like to hear it," he said. "I don't think it's best to send my people in to stop them with just handguns."

"I hope we would never have to use it," Green said. "But if we do, I'd like them to be prepared."

Several other school districts have similar weapons but policies differ on whether they are brought on campus or left in patrol car trunks or administration buildings.

Fontana school police bought the guns for about $14,000, which fell below the threshold that requires school board approval. School board members were not informed until after the purchase.

Board member Leticia Garcia said the police chief and superintendent should have alerted the five-member board and held a public hearing on the issue. She said arming officers with such weapons is a policy matter and should have been decided by the entire school district community, especially in light of the ongoing debate around the country.

Garcia, whose son attends Fontana High School, said she is working with local state legislators to draft a bill that would keep school police departments from taking these types of weapons onto campuses.

"We're turning our schools into a militarized zone," she said.

But the Fontana school superintendent said she believes it's a necessary evil to have the guns on campus to keep the 40,000-plus students and staff members safe. Officers have gone through training for the weapons, Olsen-Binks said.

"It balances providing that community-oriented openness at schools without compromising any kind of security for students and employees," she said.

Although she stopped short of saying the matter should have been put before the board, Olsen-Binks said doing so might have helped ease concerns.

"Having an opportunity for more community discussion is always a good thing," she said.

The rifles are kept either in the trunk of the police officer's vehicle or in a safe on campus.

Still, Garcia worries that bringing such a weapon on campus could lead to it falling into the wrong hands. An officer could be overtaken or someone could gain access to the safe, she said.

"Teenagers can get creative," Garcia said.

Green, however, dismissed that concern as unrealistic.

The Los Angeles Unified School District's police department has issued "patrol rifles" to officers on an as-needed basis, the district said in a statement. The department does not disclose the number of rifles given to officers.

Most San Diego Unified School District police officers have AR-15 rifles, Lt. Joe Florentino said. But the department did not buy the weapons; rather, officers were allowed to purchase their own — which many did, he said.

The rifles are kept in the trunk of the officer's vehicle and are not brought into school buildings. Although there is no policy yet, bringing the rifles into buildings is something the department is looking at, Florentino said.

"From a safety standpoint, we have police officers that want the weapons close by," he said. "If we keep them in the vehicle trunk, they would have to run to the car and grab it if they need it."

“We don’t have any weapons that are stored on our police campus. We have no immediate plans to do that,” LAUSD School Police Chief Steve Zipperman told KCAL9’s Dave Lopez.

However, Zipperman said there is always room for discussion.

“I think it’s important that we always evaluate. Are we deploying these weapons in the right place? Do we have the proper amount of weapons out there to be able to respond to those types of incidents?” he said.

Zipperman, however, said school police have strategically placed armories and other satellite stations.

“I believe we are ready. I hope we never have to use those weapons, but in the event that we have to counter-assault some type of an armed assault on one of our campuses or anywhere else in the community, I feel comfortable we have the ability to respond to that,” he said.

In addition, the Los Angeles Police Department, which works with school police, said officers are well-equipped with weapons in their vehicles to respond to campus emergencies.

As for semi-automatic rifles being stored on other school districts’ campuses, Santa Ana Unified said they have assault weapons for their officers, but none on school grounds.

Lopez tried to contact the Long Beach Unified School District, but was unable to get a response.