January 14th, 2013 | California tumbled two more spots, to 49th in the nation in per-pupil spending, in Education Week’s latest annual Quality Counts report, released last week. The ranking, which includes Washington, D.C., and the 50 states, covers spending in 2010 and thus doesn’t include the impact of higher taxes that voters approved in passing Proposition 30 in November.

Education Week’s often-cited annual ranking factors in regional costs of living. (There are also significant regional cost disparities within California.) By comparison, according to the most recent report by the U.S. Census Bureau, covering 2009-10, California spent $9,375 per student, ranking 35th in the nation and only $1,240 below the national average of $10,615.

California also ranked low – tied for fifth-worst – in another Education Week measure, the percentage of state and local taxable resources spent on K-12 education. California, along with Oregon, Louisiana and Tennessee, spent 2.9 percent, compared with 4.4 percent nationally. Vermont was at the top, spending 5.8 of resources on education; Delaware (2.4 percent) was at the bottom.

The state Department of Finance is projecting in Gov. Brown’s proposed state budget that per-student spending will increase a hefty $2,700 through 2016-17, compared with 2011-12, but that increase would still be shy of the current national average. Other states also will probably raise their spending as the recession loosens its grip.

California ranked 36th overall in Education Week’s report. In addition to school finance, the report considers factors like student achievement, regulations for teachers and measures of equity. Each factor is assigned a number score and then averaged into a letter grade. California received a 75.5, or a C, which, while not stellar, is better than the F the state was given by Michelle Rhee’s StudentsFirst earlier this week. 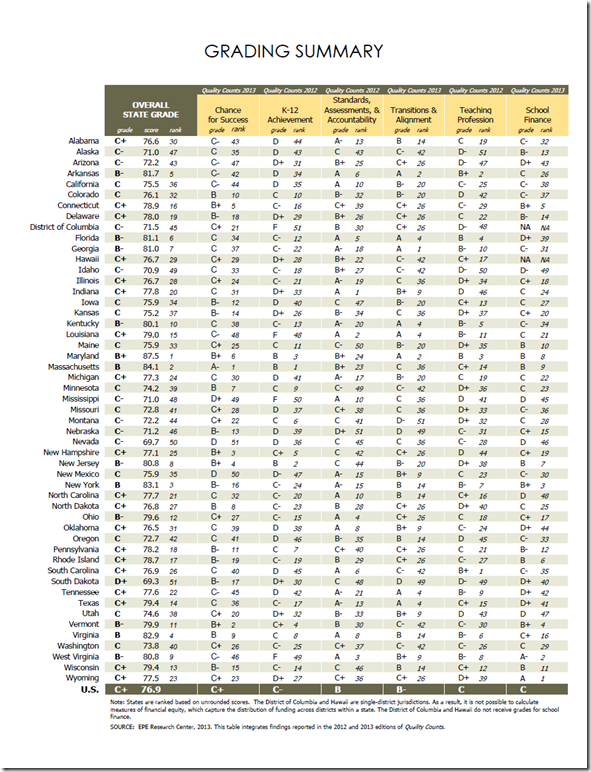