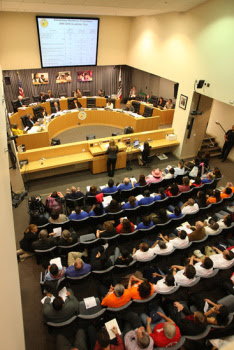 January 9th, 2013, 7:32pm  ::  The Coalition for School Reform --an advocate for charter schools-- has picked its horses in the three Los Angeles Unified school board races. It's placing its bets on Monica Garcia in District 2, Kate Anderson in District 4, and Antonio Sanchez in District 6.

Monica Garcia, who’s been on the school board since 2006, is defending her seat against five challengers: Annamarie Montanez, Isabel Vazquez, Abelardo Diaz and Robert Skeels. Garcia is backed by the Service Employees International Union but lost the support from the Los Angeles County Democratic Party over her support of charter schools.

Kate Anderson made a name for herself as a parent advocate. She's running against incumbent Steve Zimmer, who is endorsed by SEIU and United Teachers Los Angeles.

Antonio Sanchez is running to fill Nury Martinez’s seat, the only one not contested by an incumbent. He’s picked up support from UTLA, SEIU, and LA County Federation of Labor’s COPE Committee. The 30-year-old Sanchez faces off against Maria Cano, who favors more oversight of charter schools, teacher Monica Ratliff, and Iris Zuniga an executive for the charter school operator Youth Policy Institute.

Primaries will be held March 5 .

The Coalition is expected to aggressively fundaraise, and many expect outgoing Mayor Antonio Villaraigosa to do much of the heavy lifting as he did in the last election.