TODAY IS 40th ANNIVERSARY OF SCHOOLHOUSE ROCK AND 11th ANNVERSARY OF NO CHILD’S LEFT BEHIND: 1 helped kids learn, 1 forced schools to fail.

see: ‘SCHOOLHOUSE ROCK’ GETS A SINGALONG SALUTE AT THE KENNEDY CENTER FOR ITS 40th ANNIVERSARY

ON 11th ANNIVERSARY, NO CHILD LEFT BEHIND LAW IN TATTERS: California officials expect 80 percent of schools to fail in 2014. 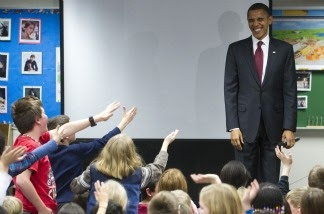 Saul Loeb/AFP/Getty Images - President Obama has said the U.S. needs to replace No Child Left Behind with a law that’s “more flexible and focused on what’s best for our kids.”

January 7th, 2013, 9:53pm  ::  As the federal No Child Left Behind law's eleventh birthday arrives Tuesday, California is one of the few states that still must meet its requirements.

The Obama administration has exempted 33 states from the law's provisions since 2011 -- in exchange for agreeing to reforms. California has refused to implement a key measure: using student test scores to assess teachers and principals.

As a result, its request for a wavier was denied last week. Now California schools that fail to meet the law's provisions could face serious sanctions. State officials expect 80 percent of schools to fail in 2014.

“If they don't meet those goals over a five year period then the school may be closed, everybody will be fired, the school may be turned into a charter school, the school can be handed over to private managers,” said researcher Diane Ravitch of New York University.

Officially called the Elementary and Secondary Education act, the goal of the federal law, signed  by President George W. Bush in 2001, was to improve student learning by holding states accountable for teaching all students math and English. It used standardized tests to ensure the job was being done, expanding the role of the federal government in children's education. It said that no student -- white, Latino, African American, or an English learner -- would be left out of the goal reaching proficiency in English and math by the year 2014.

At the time, idea that setting the goal would make it a reality was inspiring, she said. Now she barnstorms across the country saying the goals are ludicrous.

The law ultimately pitted reformers against teachers unions, who complained that it was creating a generation of multiple-choice test-takers who were losing out on other learnings.

State education officials  have argued that the law's many waivers make it null. UCLA researcher John Rogers said the Obama administration wanted to overhaul the law, but Congress has failed to pass a bill.

“I think that the strategies of providing states waivers was a way for the US Department of Education to ease the pressures without having to back away from its claims of upholding high standards,” Rogers said.
But he says California's failure to meet the standards may pressure Legislators to finally reform the law.