January 17, 2013 |  5:26 pm  ::  A high-spirited group of nearly 100 parents descended on the Los Angeles Unified district office Thursday and turned in petitions demanding sweeping changes at their failing school in the first use of the controversial parent trigger law in the city.

But parents at 24th Street Elementary School in the West Adams neighborhood got a strikingly different reception in L.A. Unified than their counterparts did in Compton and the High Desert city of Adelanto, where parent trigger campaigns sparked long legal battles and bitter conflict.

L.A. Unified Supt. John Deasy greeted the parents in Spanish and welcomed them into the school board meeting room. After accepting the petitions signed by 358 parents, who represent 68% of the students, he pledged to work for “fundamental and dramatic change” at the school.  The campus is one of the district’s lowest performing elementary schools, with two-thirds of students unable to read or perform math at grade level and has made little improvement in the last six years.

“It is absolutely the administration’s and my desire to work side by side with you so every student – todos los ninos – gets an outstanding education,” Deasy said, as parents erupted in applause and cheers.

In an unexpected twist, the president of the teachers union, Warren Fletcher, also showed up and told the assembled parents that the parent trigger law “is a tool like an axe” and that its successful use to convert an Adelanto elementary school to a charter campus would force the removal of all instructors there.

The Adelanto campaign marked the first victory in the state for proponents of the 2010 parent trigger law, which allows parents to petition to overhaul a school with new staff and curriculum, close the campus or convert it to an independent, publicly financed charter.

But Fletcher also appealed for collaboration between parents and United Teachers Los Angeles. “We wish to work with you. We wish to work as a team,” he said.

Ben Austin of Parent Revolution, the educational nonprofit  that lobbied for the law and has organized parents, hailed the pledges for cooperation and unity. In the Compton and Adelanto campaigns, Parent Revolution and petition supporter clashed with school officials and teachers they said deliberately obstructed their efforts.

“Today was a new chapter in this movement,” Austin said. “It was a paradigm shift in changing the way that parents, educators and administrators talk about parent trigger.”

The school’s failures have been acknowledged by its staff, who submitted an improvement plan under the district’s process known as Public School Choice. But the district, which ordered the plan about a year ago after identifying the school as one of the lowest performers, rated it this week as inadequate.

Amabilia Villeda, a 24th Street parent leader, said ineffective leadership and teaching at the school had caused her daughter to fall several grade levels behind in reading. She said she is determined to get better outcomes for her two younger children.

The petition asks that the school be transformed into a charter. But Villeda and others said they would try to work for changes with the district before pursuing that option.

- smf: Oddly – or maybe not oddly -  this story did not appear in my edition of the Times this AM

"How did this happen?" Villeda asked in Spanish. "Now she's in eighth grade and reads at third-grade level."

On Thursday, Villeda and a group of nearly 100 parents at 24th Street Elementary School arrived at the headquarters of the Los Angeles Unified School District to say they've had enough.

They presented Superintendent John Deasy a petition signed by 68 percent of the school's parents calling for immediate, significant action to improve one of the district's lowest performing grade schools, where just 30 percent of students are proficient in reading and 35 percent in math.

"The children aren't learning," said Villeda, who has a son in third grade at the school, located in an impoverished, mostly Hispanic immigrant neighborhood south of downtown Los Angeles. "That's what worries the parents."

The parents group, call the 24th Street Parents Union, is using California's landmark "parent trigger" law, which allows parents to force a district to undertake radical action to reform a low-performing school if more than half of parents sign a simple petition.

The parents want the district to install new school leadership, an improved academic program with high expectations for students, and ensure a clean and safe school, Villeda said. If that doesn't work, parents will move to convert the school into a charter, she added.

"I hope that now we are listened to, because before we did not receive any response," Villeda said to loud applause.

Deasy, who has embarked on an ambitious agenda to overhaul the nation's second-largest school district, welcomed the parents and promised to meet with them next week, saying he had just rejected a reform plan for the school as insufficient.

"It is absolutely my desire and my administration's to work side-by-side with you so all children at 24th Street get an outstanding education," he said.

Parents repeatedly asked Deasy why nothing had been done at the school. "I don't know," he said. "But I'm very sure you will not have long to wait now."

Warren Fletcher, president of teachers union United Teachers Los Angeles who also attended the impromptu meeting, told parents that he wanted to ensure that teachers were included in the reform discussion. "We wish to work as a team," he said. "We cannot do that as adversaries."

Several parents noted that teachers had been unresponsive to parents and had criticized the parent trigger law. Fletcher apologized. "If any teacher has not been responsive, that has been a mistake," he said.

The case will be the third in the state under the parent trigger law. In both previous cases, in Compton Unified in Los Angeles County and Adelanto Elementary in San Bernardino County, parent advocates met with deep resistance from teachers and administrators and ended up in court.

Compton Unified won its legal battle when a judge threw out the petition on a technicality. In the Adelanto case, a judge ordered the district to comply with the petition and turn the school over to a charter operator starting in September. 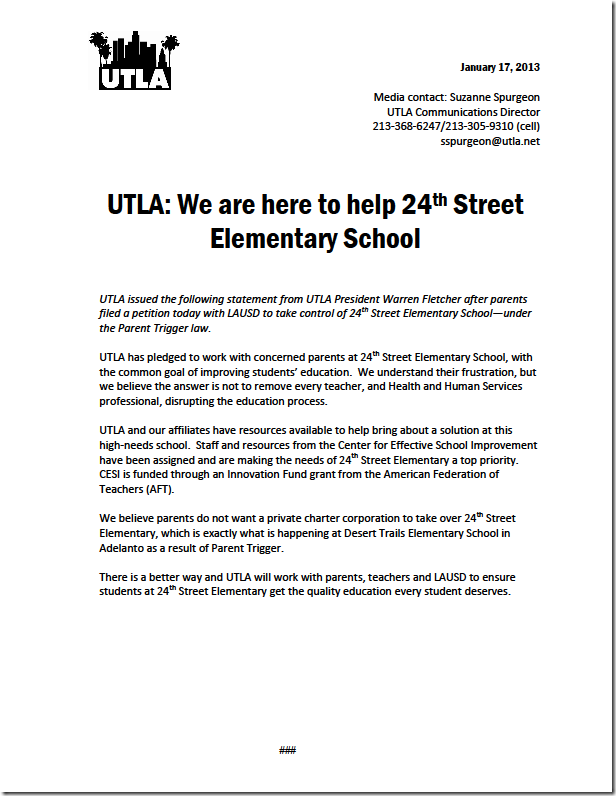 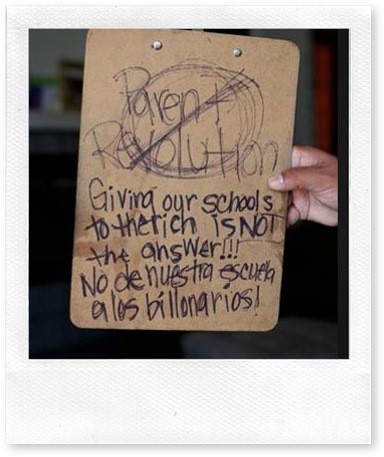