“Under this budget, K‑12 school districts will see an increase in funds. School districts serving those students who have the greatest challenges will receive more generous increases — so that all students in California have the opportunity to succeed. This budget also focuses more responsibility and accountability on those who are closest to our students.” 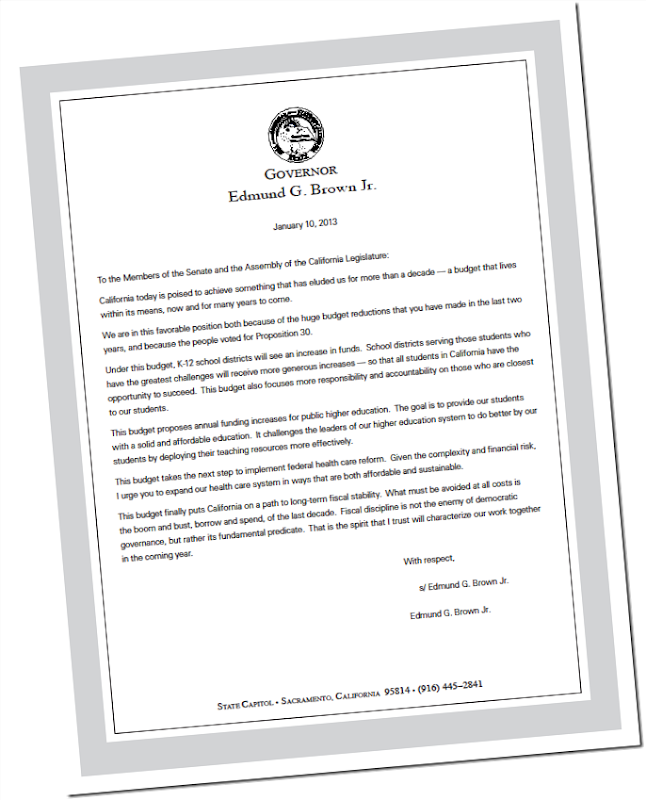 “The budget cuts made in the last two years and the passage of Proposition 30 make it possible to both live within our means and to increase funding for education,” said Governor Brown.

When Governor Brown took office, the state faced a $26.6 billion budget deficit and estimated annual gaps of roughly $20 billion. The first two state budgets under Governor Brown’s watch eliminated these deficits with billions of dollars in cuts as well as temporary revenues. The 2011-2012 and 2012-2013 budgets provided three dollars of spending cuts for every dollar in temporary tax revenues approved by the voters.

To maintain the fiscal stability that has been achieved, the budget reflects the continuation of spending cuts made in the last two years, continues to pay down the “wall of debt” and recognizes risks that remain.

“Fiscal discipline is not the enemy of democratic governance, but rather its fundamental predicate. In fact, it is through fiscal discipline that this budget can invest in education, expand health care and provide a safety net for the most vulnerable,” said Governor Brown.

By aligning expenditures with revenues, paying down debt and creating a $1 billion reserve, this budget provides long-term fiscal stability on a level that California has not enjoyed in more than a decade.

After years of decline, this budget significantly increases state funding per student in K-12 schools – $2,700 by 2016-2017. Funding for K-12 and community colleges increases by $2.7 billion next year, and by $19 billion by 2016-2017. While K-12 school districts across the state will benefit from the increased funding—through a new school funding formula—school districts serving those students who have the greatest challenges will receive more generous increases—so that all students in California have the opportunity to succeed. The budget increases flexibility at the local level so those closest to the students can make the decisions.

This budget increases state funding for UC and CSU by an additional $250 million, 5 percent. It proposes a multi-year stable funding plan to strengthen our higher education system, ensure affordability and reduce student indebtedness. Higher education costs have risen rapidly and middle class students have paid the price. By shortening the time it takes a student to successfully complete a degree and calling on UC and CSU to deploy their instructional resources more effectively, the system can be made more affordable—both for the students and the state.

This budget expands access to health care for Californians by implementing federal health care reform. It expands coverage by simplifying Medi-Cal eligibility and extending coverage to childless adults and uninsured parents. Given promised federal funding, the budget outlines two alternative pathways. It also recognizes that implementation of health care reform will require changes in the respective responsibilities of the state and the counties.

The full budget document can be found here: www.dof.ca.gov

Audio from today's press conference can be found here.