Financial problems caused by decreasing enrollment is largely because of the lure of local charter schools. 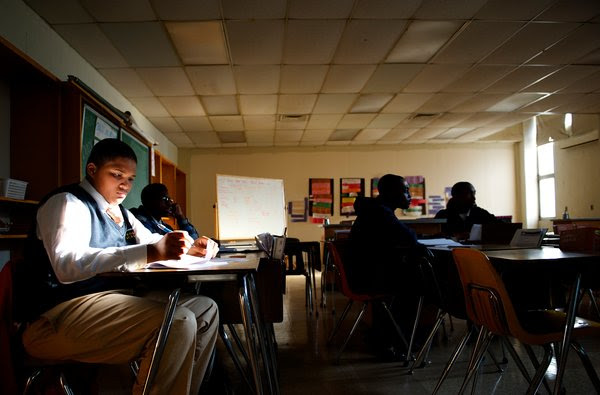 Mark Makela for The New York Times - A class at University City High School in Philadelphia this month. Students there will be forced to transfer if a proposal to close and consolidate district schools is passed in March. More Photos »

Nearly 80 percent of its 11th-grade students read below grade level in statewide tests this year, while 85 percent failed to make the grade in math. Last year, about only a quarter of its students participated in precollege testing like the SAT.

Largely because of the lure of local charter schools, the school is one-quarter full, with fewer than 600 students for its nearly 2,200 seats. It needs major work on its infrastructure, including lighting and heating systems, that would cost an estimated $30 million.

Now, facing deep financial problems, the Philadelphia School District has proposed an unprecedented downsizing that would close 37 campuses by June — roughly one out of six public schools, including University City. If the sweeping plan is approved, the district says it will improve academic standards by diverting money used for maintaining crumbling buildings to hire teachers and improve classroom equipment.

The 237-school district faces a cumulative budget deficit of $1.1 billion over the next five years, after $419 million in state cuts to educational financing this year. The district’s problems are compounded by the end of federal stimulus money and rising pension costs.

Even after borrowing $300 million to pay the bills for this academic year, the district faces a deficit of $27.6 million, a figure that officials say will rise sharply in coming years.

Its problems are worsened by having to maintain buildings that are drastically underused. Among 195,000 student “seats,” 53,000 are empty, according to the district’s new superintendent, William R. Hite Jr., who argues that the solution is to close the schools, sell their buildings and transfer students into those that remain open. Some middle schools would be converted to elementary schools, and vice versa, and many students would be moved to different schools, sometimes in different neighborhoods.

In all, 17,000 students and more than 1,100 teachers would be affected by closings, program changes and new grade configurations. Schools that would be closed were selected on the basis of their physical condition, usage, academic record and cost per student.

The proposal, announced on Dec. 13, is the outcome of a two-year process that began long before Dr. Hite’s arrival on Oct. 1. Without the closings, he warns, finances will deteriorate to the point where the district itself will be in jeopardy.

“We run the risk of talking about a district that is no longer financially able to operate,” Dr. Hite told a noisy meeting of about 450 parents, students and teachers at Martin Luther King High School in the Germantown neighborhood on Dec. 19, at which district officials were trying to sell their plan.

Although the district has been able to borrow enough to operate this year, it has reached its credit limit, Dr. Hite said. “We no longer have the ability to borrow that kind of money going forward,” he said.

Other large cities, including Chicago, Detroit and Washington, are also considering school closings because of declining enrollment, competition from charter schools and overcapacity, said Michael Casserly, the executive director of the Council of the Great City Schools, an advocacy group for urban public schools.

But Philadelphia has been hit hard by state education financing that has been among the lowest per student of any major city, Mr. Casserly said. “The state’s historical lack of spending has had an eroding effect on the district,” he said.

The proposed cuts — which are scheduled to be voted on in March by the School Reform Commission, a state organization that oversees the district — have ignited angry protests from teachers, students and parents. They argue that children, particularly in their elementary years, should not be forced to attend school outside their neighborhoods; that academic improvements would be disrupted; and that students attending new schools would be victimized because of longstanding inter-neighborhood rivalries.

At University City High, the announcement produced shock and disbelief, said Timothy Stults, the principal, who has overseen academic improvements since taking over leadership of the school in 2009. He now wonders whether his work will be undone by the impending closing.

“I had some level of emotion, some frustration” in response to the district’s announcement, Mr. Stults said.

Under his leadership, the proportion of students attaining the state proficiency or advanced standard in reading rose to 22.4 percent this year from 6.7 percent in 2010. Math proficiency increased to 14.4 percent from 3.6 percent over the same period.

“In many respects, this school was the worst school in the city,” Mr. Stults said. “That’s no longer the case.”

For some students, anger over the planned closing of University City High has been replaced by an understanding that the proposal reflects the poor condition of their building, not academic performance. Students are now focusing on how to keep the school community together, albeit in a different location.

“Emotion turns into logic,” said Matthew Gillian, 18, a senior who is helping in the search for alternative locations for University City students at schools that remain open. “It makes you understand why certain things have to happen.”