Calling Crenshaw the worst in L.A. Unified, Supt. John Deasy gets the green light to turn the landmark campus into three magnet schools. 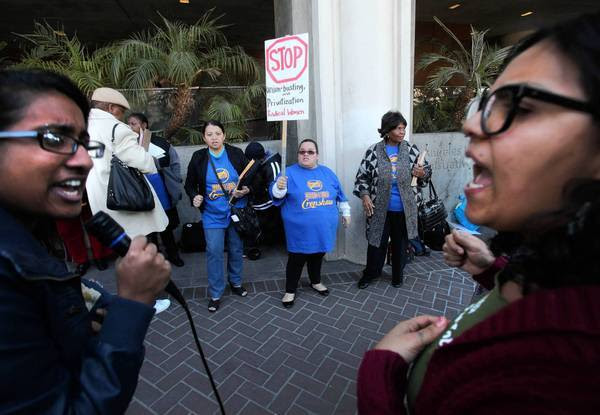 January 16, 2013, 4:00 a.m.  ::  No school has meant more to the African American community in Los Angeles than Crenshaw High. For most of its 45 years, it has been an established neighborhood hub, known for championship athletic teams and arts programs, sending graduates to top colleges.

But the Leimert Park campus has declined in recent years. Dropout rates have soared and student achievement has plummeted. L.A. Unified school Supt. John Deasy calls it one of the district's biggest disappointments.

In an effort to turn the school around, the Board of Education on Tuesday approved Deasy's drastic proposal to remake the campus into three magnets — and require teachers to reapply for their jobs.

Deasy's critics, including those at Crenshaw, were quick to complain. They say he is using an ax instead of a scalpel, that his approach would jettison talented people and abandon efforts that show some promise and deserve his support.

Rita Hall, a member of the school's first graduating class in 1969, told the board Tuesday that the school was once successful because of immense stability and support — which it lacks today. The campus, even through its struggles, is an important mainstay in the community.

"Crenshaw means family.... The board doesn't seem to recognize that there is a strong legacy and bond," Hall said. "We are very passionate about our school."

This is not the first time that Crenshaw, with an increasingly Latino student body, has been the focus of L.A. Unified's attention. Other efforts to turn around low achievement weren't successful. In 2005, the school lost its accreditation in a largely bureaucratic snafu. In 2008, the school failed to receive a state academic rating because it failed to test enough students.

Many parents are opposed to the new plan and pleaded with the board to delay the vote. Speakers blamed the district for the school's slow progress, telling the board that the campus has suffered through a parade of administrators — more than 30 principals and assistant principals over seven years, according to veteran Crenshaw teacher Alex Caputo-Pearl. The transition to magnet programs would be disruptive for students, they said.

Deasy argued that much of the sentiment expressed by parents and teachers is the reason the district is taking action to make sure student achievement becomes "dramatically and fundamentally better."

Board member Marguerite Poindexter LaMotte, who represents the school and lives nearby, told the crowd to give the district a chance to transform the school into one that students could be proud of.

"We have got to change something at Crenshaw for the better," LaMotte said. "When they go to school in the morning — when I see them passing — I want them to say 'I go to Crenshaw and I'm proud to go to Crenshaw.' "

The board approved Deasy's plan unanimously with one member, Richard Vladovic, absent. After the vote, supporters began chanting "The fight is not over, we will take over!"

LaMotte quickly responded: "I'd want to know why anyone would want a child to go to a broken school."

The school, with more than 1,300 students — nearly all from low-income families — has made virtually no progress in increasing achievement in English and math. The percentage of students at grade level in English has declined slightly over four years, from 19% to 17%; in math, the figure has inched up — but only from 2% to 3%.

This year, there was an increase in Crenshaw's overall Academic Performance Index score, which includes results from all students tested. It rose from 554 to 569, which still leaves the campus among the lowest-performing in the state and, Deasy said, the worst in L.A. Unified. The school has also lost students, with many choosing other district schools or independent, publicly funded charter schools.

Deasy has authority under federal law to replace the staff at Crenshaw because of the school's poor performance, but he describes the move differently. Avoiding the term "reconstitution," which is used to describe a school that is substantially restaffed, he instead focuses on the changeover to a magnet program. But UCLA associate professor John Rogers said Deasy's move is essentially reconstitution under another guise.

The conversion echoes the strategy already employed at Westchester High, another comprehensive district high school where a majority of students are African American.

Magnet schools were designed to draw enrollment from across the district to promote integration.

District officials consider Westchester's changeover a significant improvement that allowed them to alter the culture of the school. Some Crenshaw parents, who followed events at Westchester, aren't persuaded.

In recent years, Crenshaw gained distinction as the turnaround project with the most direct community and teacher participation.

On July 1, 2008, Crenshaw joined forces with the Bradley Foundation and the Urban League — two local nonprofits with deep ties to the African American community — in an effort to bring together financial resources and outside expertise, while providing local autonomy outside of the direct management of L.A. Unified.

Some observers placed hopes for sustained improvement at Crenshaw because of the collaboration among outside groups, teachers and community members. The latter two groups had been meeting for some time as the Crenshaw Cougar Coalition to push the school forward.

The school is about two years into its current effort, which it calls the Extended Learning Cultural Model. It involves teachers receiving training on the culture of their students and students taking part in projects relevant to their lives.

In one class, for example, students received packets of school data, district policies and descriptions of theories about school reform. They had to argue which proposals made sense and support their choice with data. For math, the project was supposed to incorporate principals of geometry. Such projects also are supposed to include relevant internships in the community.

One casualty of Deasy's plan has been funding support for that effort from the New York City-based Ford Foundation.

The foundation provided a seed grant of $225,000 last year to help Crenshaw with  its current plan and was in discussions to increase support.

"We're very impressed with the education model they were developing and we were disappointed when it looked like that would not continue," said Jeannie Oakes, who oversees Ford's education philanthropy.

smf:  Please re-read those  last three paragraphs – the District is leaving a grant from the Ford Foundation on the table in favor of the mission of The Gates Foundation.  And the (Chicago-based) Times does the truth and their readership no favors by styling the Ford Foundation as “New York based” - as if they are unwanted special interests from the east coast.  Jeannie Oakes, Director of Education and Scholarship at Ford was  formerly the Director  at  UCLA/IDEA - and was intimately involved and a guiding force in previous and ongoing school reform in LAUSD .  Dr. Oakes worked intimately with LAUSD on school reform initiatives in the inner city – with a special focus on students of color – while “Rhode Island based” John Deasy was up the 10 freeway wreaking dubious reform in Santa Monica Unified. 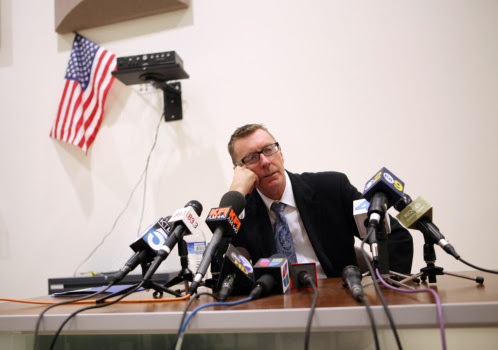 AFP/AFP/Getty Images - Los Angeles schools Supt. John Deasy, seen here in a file photo, told Crenshaw parents "the quality of instruction is not what it needs to be.”

January 15th, 2013, 8:14pm  ::  L.A. Unified voted Tuesday to revamp Crenshaw High School – one of the worst performing schools in the district. But the plan has some parents and teachers up in arms.

Crenshaw’s 1,500 students will be split into three separate magnet schools. While officials are still working out the details, they told parents last month that the magnet programs are likely to focus on the arts, business and science, and technology, engineering and math.

All six school board members present at the monthly meeting voted unanimously to back Superintendent John Deasy. They agreed that the only way to improve the school’s abysmal academic scores is to scrap its current program.

But parents and students who’d waited more than four hours to speak against the plan could not contain their anger over the board’s decision. They sparred with board president Monica Garcia and member Marguerite LaMotte, who represents Crenshaw and voted in favor of the overhaul.

Protesters dressed in blue and gold — the struggling school’s colors — interrupted the meeting chanting, “The fight’s not over, we will take over.”

That prompted LaMotte to ask: “I want to know why anybody would want their child to go to a broken school?”
Under the superintendent’s plan, the entire staff will be dismantled and anyone who wants to return will have to reapply for their job.

“The purpose of the decision is to ensure that Crenshaw gets dramatically and fundamentally better,” said Deasy to the surly crowd.

Deasy said he’s visited the school 13 times over the past year and a half,  “and the quality of instruction is not what it needs to be.”

He said magnet schools have better track records for improving test scores than all other teaching and learning models.

Any student living in the school’s boundaries would be guaranteed a spot, but other students across the district would be able to enroll as well. That could boost enrollment at a school that’s been losing students to nearby Westchester Secondary Charter School.

But parents complain Crenshaw’s problems have more to do with constant change than any particular teaching method. It has had four principals and 33 administrators in the past three years.

Angelina Parker was among 13 parents who pleaded with the board to vote against the conversion.

“We were excluded, now we feel cheated,” she said, her voice beginning to rise.  She asked the board to delay the vote until the community had been consulted about the school’s future. “We are angry!,” she shouted into the microphone. Regaining her composure, she continued, telling the board, “It’s easy: include us in any decision concerning Crenshaw High School.”

Tuesday’s decision takes control away from the Greater Crenshaw Educational Partnership — a coalition of local groups that has operated the troubled high school for the past four years.