To build classrooms and sports facilities, many districts have been relying on bonds that can require as much as $20 in payments for every $1 borrowed. 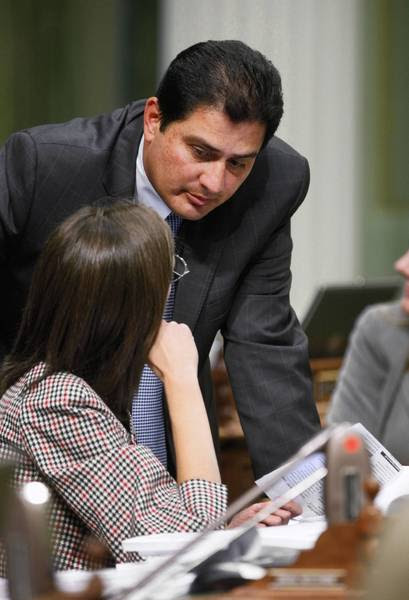 Assemblyman Ben Hueso (D-San Diego) co-introduced the bill, which would bar school districts from using capital appreciation bonds that take longer than 25 years to mature or cost more than $4 for every $1 borrowed. (Rich Pedroncelli, Associated Press / May 29, 2012)

January 28, 2013  ::  Two state lawmakers have moved to crack down on a costly method of finance that hundreds of school districts have been relying on to pay for new construction.

Fiscal watchdogs, including county treasurers and California Treasurer Bill Lockyer, have warned repeatedly that the bonds are risky and reminiscent of the lending and Wall Street excesses that contributed to the Great Recession.

"We have been very careful to draft the bill in a way that will solve the problem," Hueso said. "All the points we put together should address any potential abuse in financing strategies."

The legislation would reduce the maximum maturity of capital appreciation bonds, or CABs, from 40 years to 25 years and limit a school district's repayment ratio to no more than $4 in interest and principal for every $1 borrowed.

Districts would be given an option to refinance CABs with maturities greater than 10 years if better terms become available. Schools also would be required to provide their boards with public reports that detail planned borrowings that involve capital appreciation notes.

The analysis would include the cost of the bond issue, a comparison with conventional forms of financing, the reason for using capital appreciation notes and disclosures by brokerages hired as underwriters.

CABs with maturities of 25 to 40 years result in debt payments that can be as much as 20 times greater than the principal.

According to a Times analysis, at least 200 school and community college districts in California have borrowed billions of dollars using the long-term notes since 2007. The bonds have saddled them with staggering debts that will eventually have to be paid off by district property owners who are assessed a tax per bond issue.

Nearly 70% of the money borrowed involves extended 30- to 40-year notes, which will cost taxpayers $13.1 billion, or about 6.6 times the amount borrowed on average.

The bill is expected to be heavily scrutinized by members of the state public finance industry, school district officials and various education-related interest groups.

Although the CABs are more costly than conventional notes, local educators have said such devices have been an effective way to finance capital improvement projects during the tough economy while still complying with statutory limits on property taxes.

Officials for the Coalition for Adequate School Housing and the California Assn. of School Business Officials have said the Legislature should not take a cookie-cutter approach to school finance or restrict districts' flexibility to pay for construction.

smf notes: LAUSD has sold no CABs and to date nobody has publicly suggested we do. It is extremely doubtful that the LAUSD Bond Oversight Committee would endorse such a sale. However with the District bent on extra-curricular investments like Tablets for Everyone and with un-or-under-funded routine maintenance, deteriorating infrastructure capital needs exceeding current unsold bond potential the temptation might prove …uh… tempting!   Voters in LA County rejected (by slightly more than one-half-of-a-percentage-point) Measure J last November – which would’ve extended transit bond debt for thirty years until 2069. J would’ve been repaid for by sales tax, not property tax.