FIVE FEMALE TEACHERS AMONG SEVEN KILLED BY GUNMEN IN PAKISTAN 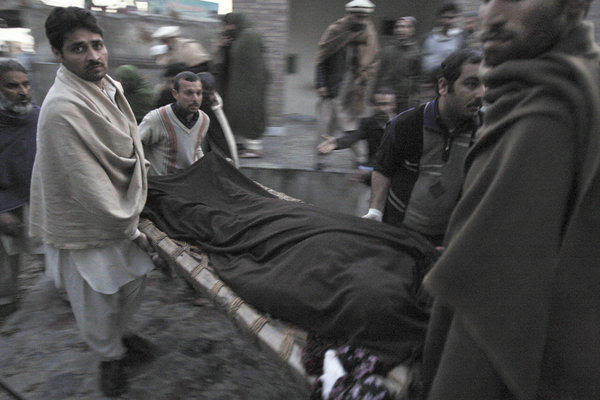 Pakistani men carry the body of a teacher who was killed Tuesday by gunmen from a hospital for burial in Swabi, Pakistan. (Mohammad Sajjad / Associated Press / January 1, 2013)

January 1, 2013, 7:10 a.m.  ::  ISLAMABAD, Pakistan — Gunmen ambushed a van in northwest Pakistan Tuesday and shot to death seven aid workers — five of whom were female teachers — in an attack that is likely to rekindle fears among Pakistanis over militant assaults on the country’s education system.

The workers, members of a Pakistani nongovernmental organization called Support With Working Solutions, were in a van leaving a community center in the outskirts of the northwest city of Swabi and on their way home when two gunmen on motorcycles forced the vehicle to stop, Swabi police and government officials said.

According to the van’s driver, Abdul Majid, the gunmen positioned their motorcycles in the middle of the road, pulled out pistols and opened fire on the van.

“I think the attackers were already waiting for us,” said Majid, speaking from his bed at a hospital in the northwest city of Peshawar, where he was being treated for gunshot wounds to his left arm and rib cage. “After they finished firing, they just drove off.”

Formed in 1991, Support With Working Solutions focuses on improving the lives of impoverished Pakistanis living in rural areas outside Swabi, a city of about 1.8 million roughly 50 miles northwest of Islamabad, the capital. The community center where the victims worked is in the village of Sher Afzal Banda and includes a primary school for roughly 150 girls and boys and a healthcare clinic, said Shahid Khan, an official at the NGO.

“Most of the children in this area were not going to school, so that’s why we established the community center,” Khan said.

No one has claimed responsibility for the attack. However, suspicion is likely to fall on the Pakistani Taliban, which claimed responsibility for the Oct. 9 attempted assassination of Malala Yousafzai, a 15-year-old girl from the country’s troubled Swat Valley. Malala, targeted because of her outspoken advocacy of education for females, was shot in the head but survived the attack and is now recovering in Britain.

So far, Pakistani authorities have been unable to halt the Taliban’s longstanding campaign against Pakistan’s education system, which the group regards as secular and therefore un-Islamic. Last year, at least 96 schools were damaged or destroyed by militants, according to Human Rights Watch. In 2011, militants attacked 152 schools.

In the country’s northwest, more than half of the schools destroyed have yet to be rebuilt. At least 600,000 children in northwestern Pakistan have missed a year or more of school because of militant attacks or threats, according to the Society for the Protection of the Rights of the Child, an Islamabad-based NGO.

Khan said Support With Working Solutions had never been threatened or targeted by militants in the past. The group’s leaders were meeting Tuesday to decide whether to continue operating the community center, he said.