Public comment is being invited on draft plans schools will use when creating spending plans and setting district priorities over the next several years.

December 13th, 2013   ::  The public has an opportunity, though not much time, to provide suggestions on a draft of the Local Control Accountability Plan, or LCAP, the primary tool or template that school districts will use in writing a spending plan for the new state funding formula.

WestEd, the consultant working for the State Board of Education to develop the accountability plan, posted the eight-page document (follows) this week and is inviting comments to be emailed to lcff@wested.org before the next revision is posted Dec. 20. Still to come is the companion piece, the proposed regulations on how districts can spend the additional dollars – the supplemental and concentration grants – that districts will receive for low-income students, students learning English and foster children under the Local Control Funding Formula (LCFF). The closely watched, much debated regulations are the key element that will guide districts as they create their first LCAP for the school year starting July 1. The proposed regs and the revised template will be published next Friday in the State Board’s agenda for its Jan. 15-16 meeting.

The draft LCAP template lays out the process that each district must follow and the forms it must complete to document its use of LCFF money. The template requires districts to cite student achievement goals, data that a district used to choose those goals, specific actions – with dollars attached – to accomplish them, and metrics to measure progress. If, for example, data show that the high school dropout rate for English learners is high, the district could choose that as a primary goal; specify how it plans to deal with it (hire more guidance counselors or add Partnership Academies offering mentorships, perhaps); detail costs and designate specific schools that will get the resources; and lay out specific measurements of progress.

Districts must break out the goals, action plans and expenditures for all students and for each of the high-needs student groups targeted for more money. And those goals must respond to eight priorities of student achievement in the law creating the Local Control Funding Formula. The template groups those priorities into three categories:

The new funding law requires districts to engage parents, teachers and the wider community as part of creating the LCAP. Parent groups pressed the State Board at its November meeting to require specific actions. Instead, the template requires that districts explain the process of involvement, in response to a half-dozen guiding questions, and to state how that interaction had an impact on the LCAP. One question asks districts to specify what changes were made to the LCAP in response to the feedback and written comments it received.

WestEd has been speaking with various advocacy groups and education organizations about the regulations and the LCAP since the November meeting and has incorporated some suggestions and rejected others. Its responses – perhaps a preview of the coming regulations – are in a two-page document that WestEd posted with the template.

The initial reaction of some of those with a stake in the template was positive, tempered with criticism on specific points.

Crediting WestEd with improving the template with each iteration, Samantha Tran, senior director of education policy for advocacy group Children Now, said the latest draft begins to provide clarity on how to address the law’s multiple priorities. It’s “beginning to feel like a template” that all districts can understand, she said. Among her suggestions:

Adonai Mack, a lobbyist with the Association of California School Administrators, said he would like to see other plans that the state also mandates, such as the annual district or LEA Accountability Report Card, incorporated into the LCAP to avoid duplication. And he expressed concern that future officials might interpret guiding questions as requirements instead of suggestions.

“We still have concerns with transparency and ease of use,” he said, while crediting WestEd for heading in “the right direction.”

Mack, Tran and John Affeldt, managing attorney for civil rights organization Public Advocates, all said that the LCAP must be clearer on how performance for individual schools fit into the LCAP. Affeldt and other advocates for low-income students and English learners had called for tracking all LCFF expenditures by site: “Parents care most about what’s being spent in their schools,” he said.

But LCFF directs that money be allocated at the district level, with the school board ultimately deciding how it would be spent, and the draft LCAP reflects that. District goals would, by default, apply to every school, unless otherwise specified. If the actions for a specific school site differ from the district’s as a whole, the district should state how.

What’s missing without individual-school LCAPs, Affledt said, are opportunities for parents at each school to determine different goals and actions, tied to expenditures, and then to hold each school accountable for meeting its targets, he said.

“What’s being proposed doesn’t meet the spirit of the law,” Affeldt said.

Comments on the template should be emailed to lcff@wested.org. 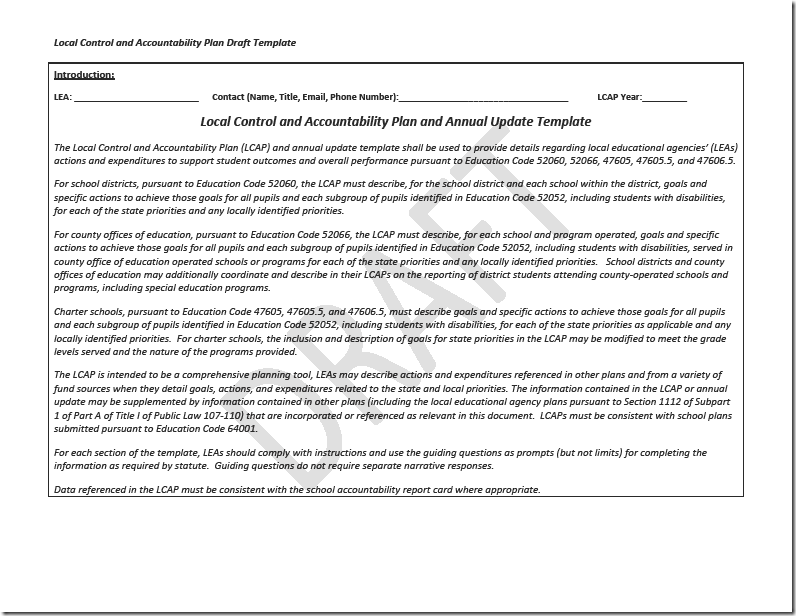 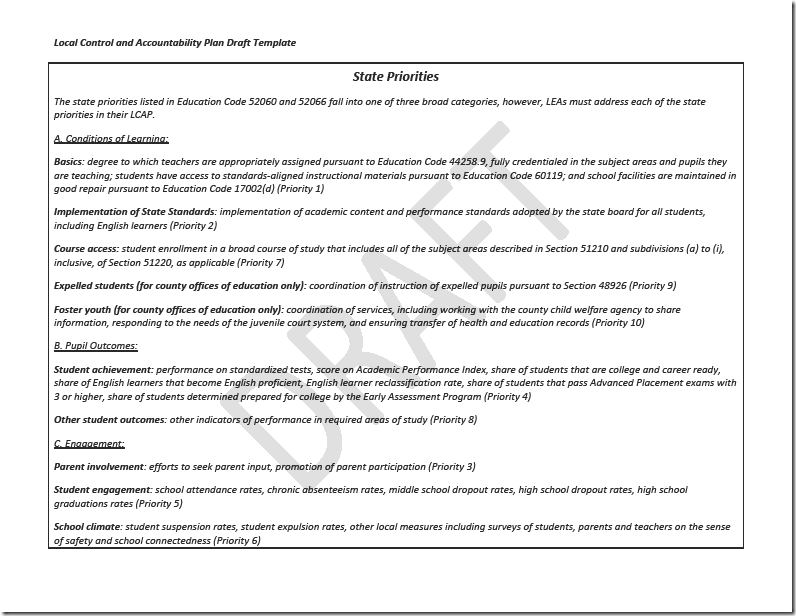 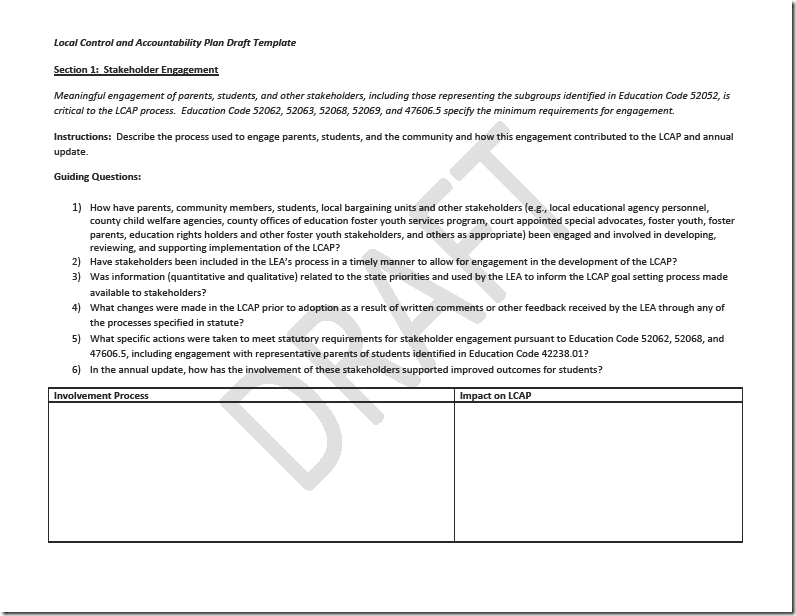 smf :  SECTION 1 (above) STAKEHOLDER ENGAGEMENT NEEDS REGULATORY TEETH AND ACTIVE ENFORCEMENT. It is this section that will undoubtedly offer the greatest challenge to LAUSD - unless they decide to blow it off - or more likely: half-heartedly apply the minimum standards as they minimally interpret them. 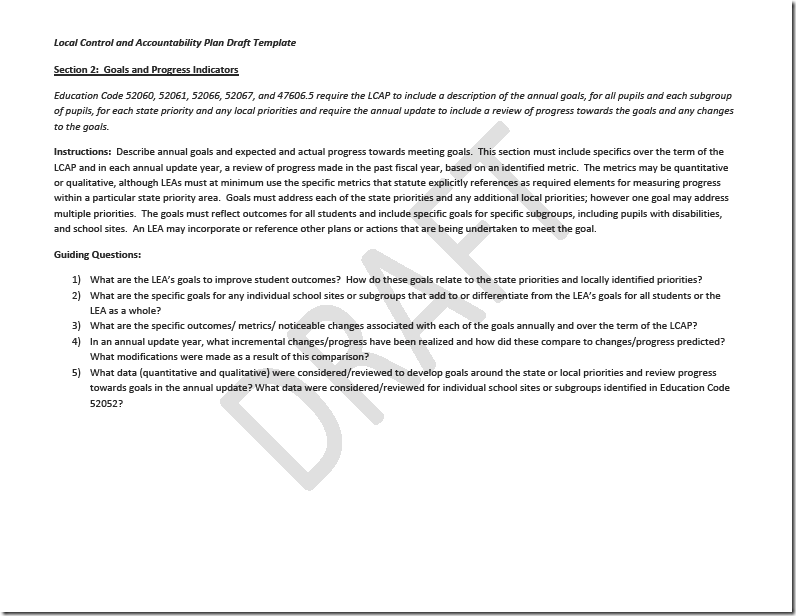 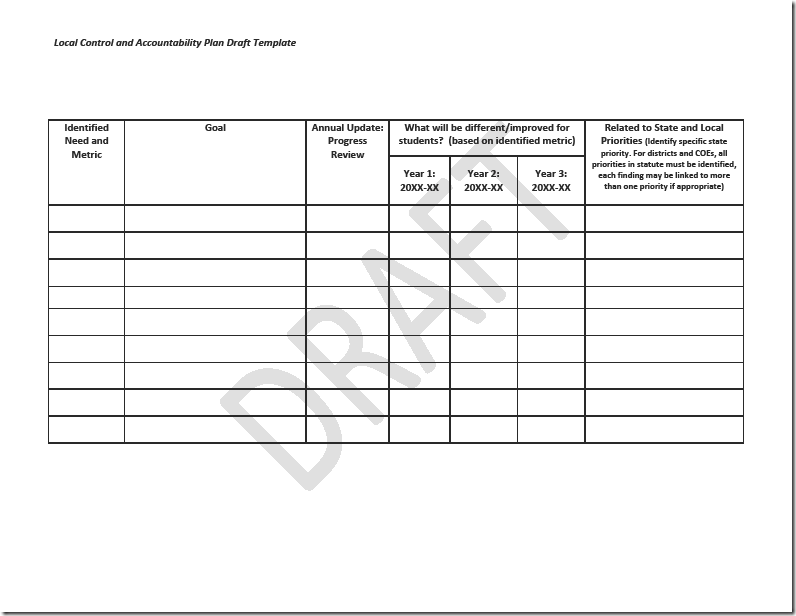 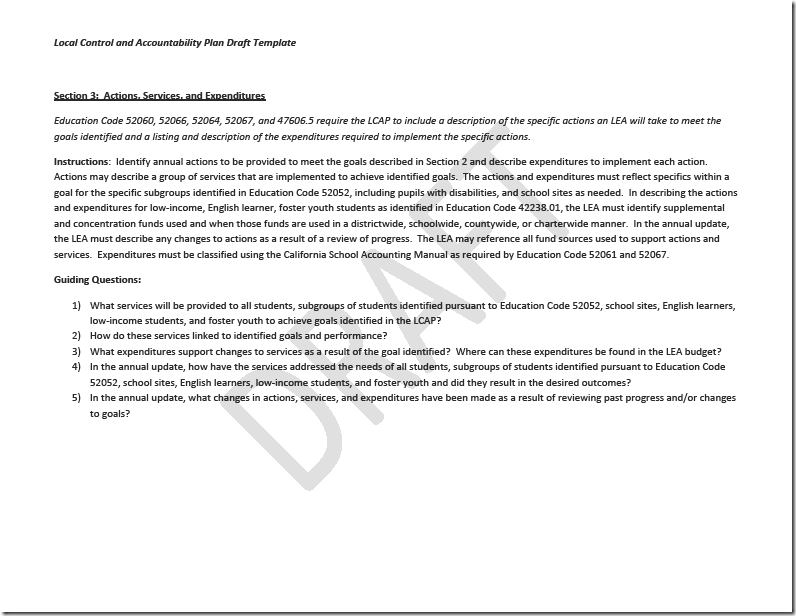 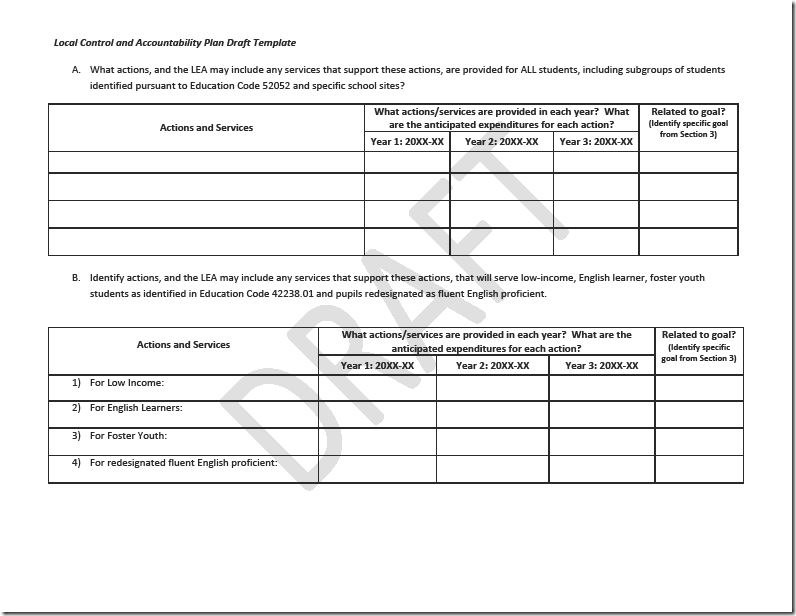 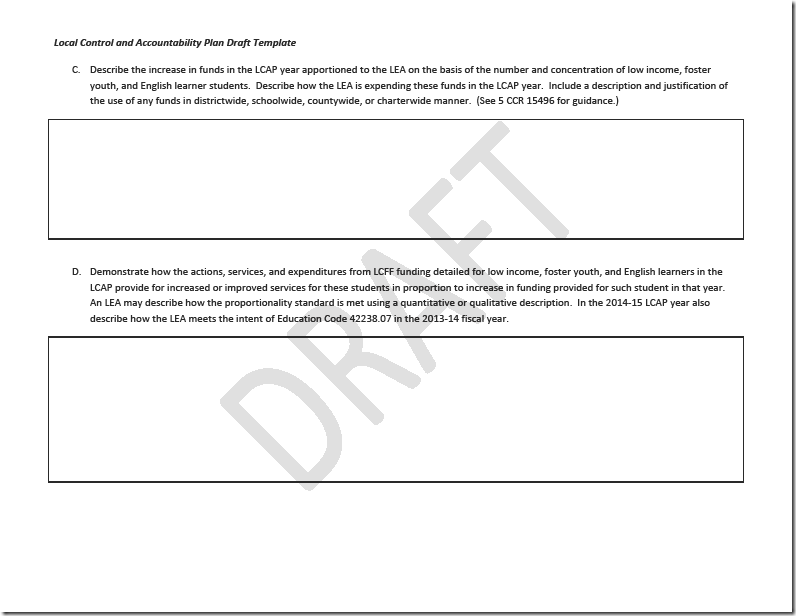