When soon-to-be USC coach Steve Sarkisian visited Veronica Bennett's class to check on a star student, she made the right play. 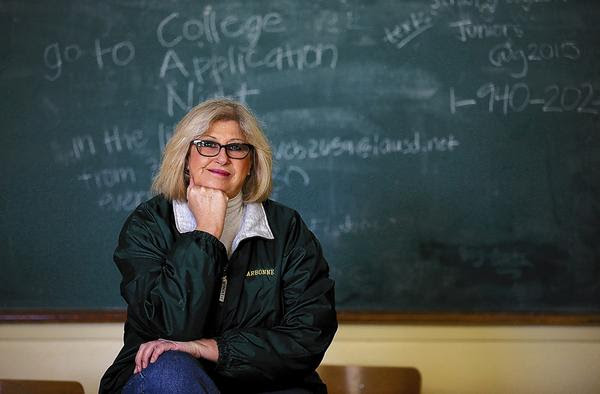 Veronica Bennett is shown in her classroom at Narbonne High School. When future USC football coach Steve Sarkisian tried to talk to a star student in her honors class, she turned him away. The young man was a student first, she informed Sarkisian, and he was busy studying. The football talk could wait. (Luis Sinco / Los Angeles Times / December 6, 2013)

The piece by Eric Sondheimer — the local treasure who covers prep sports for The Times — noted that Sarkisian had dropped by Narbonne High School in Harbor City last month to check on a star football player. Sarkisian got as far as the athlete's classroom door, but in the equivalent of a great goal-line stand, the teacher turned him away.

The young man was a student first, and he happened to be studying U.S. government with the rest of his honors class, the teacher informed the coach. She didn't appreciate the interruption.

I knew the moment I read this that I had to meet such a stand-up teacher, so on Thursday I drove down to Narbonne. As I entered the office, four well-dressed, exceedingly polite sophomores appeared. They told me they were members of the school's Public Service Academy and were running an errand for their teacher. Two of them told me they're going to be lawyers, and the other two want to be a firefighter and a police officer.

Somebody was clearly doing something right at this school. Principal Gerald Kobata attributed the school's atmosphere to a lot of good students and good teachers, too. And as we talked, one of those teachers suddenly appeared.

Veronica Bennett, the best defender Steve Sarkisian ever met, has a big voice and robust personality, but she was uncomfortably shy about my visit. She's no different from most teachers, she told me. And she was just doing her job.

Teaching, it turns out, is not Bennett's first career. The Bay Area native worked in sales for a dental lab and then became a benefits administrator for a chemical company. But it wasn't fulfilling work, so when a friend suggested she was good with kids and should consider teaching, she went back to school at age 42 to earn a credential.

"My thought … was that I would keep going until a door closed," said Bennett. "But the doors kept flying open."

She started teaching at Narbonne in 1996, and has never regretted her midlife career switch, despite the challenges. Many of her students are dealing with poverty, neighborhood crime and peer pressure.

"But when you get with them one-on-one," Bennett said, "they all want to succeed."

It was early November when Sarkisian visited Narbonne. He was head coach at the University of Washington at the time and wanted to lure Narbonne defensive back Uchenna Nwosu up to Seattle. Ironically, Nwosu wasn't interested. He'd already committed to USC.

"It was third period," Bennett said. "So during the course of our lesson, I get a school aide who comes and says the student needs to go to the athletics office. And I said no, we're right in the middle of class."

Bennett has a way of making that single word — no — into a lecture. It's all about tone, attitude, body language.

Maintaining the focus of her third-period students can be tricky, she said, so she doesn't like distractions.

"They're nice kids, don't get me wrong," she said. "But they're very social."

Moments after the first aide was turned away, another one appeared.

Even my temperature was rising as Bennett related the story.

"So she leaves, and five minutes later I get a counselor coming in. By that point I'm pretty steamed," said Bennett, who told me her students "were now bouncing off the walls."

She sent the counselor packing.

"This is the fourth interruption and I can't get anything done. So I go to the door and here's our football coach and Sarkisian," said Bennett, who was once the athletic director at Narbonne. She said she told Sarkisian she knew him from his days as a star athlete in the South Bay.

"I said, 'Hi, coach, I'm Victoria Bennett, you went to West Torrance High.' He said yes, and I didn't give him a chance to say anything else because I was hot. I said, 'I'm sure you will understand I've had most of these youngsters for two years and my goal is to get them across the stage."

If her students play football, fine, Bennett told me. If they get a full college scholarship, yahoo!

"But academics is my No. 1," she recalls telling the coaches in what she describes as a deliberate but respectful tone. "This is what I do. This is it."

She suggested that even a big-deal college coach like Sarkisian could wait until after class to conduct his business.

With that, Bennett went back and taught her class, and Sarkisian waited until later to visit Nwosu.

"She's a very good teacher," said Principal Kobata. "She holds them accountable. When you go into her class, you see student engagement.... They don't just sit passively."

Kobata said he was upset with his staff for interrupting Bennett's class. The policy is for recruiters to visit after school.

And what about Nwosu, who, as it turns out, will have plenty of time with Sarkisian at USC next year?

"I appreciated what she was doing," the student said of the way Bennett put his education first.

Nwosu said his grade-point average is above 3.0 and he might major in business at USC.

Bennett, he said, is "a cool teacher. Cool and funny."

"I love that class."