Posted on December 3, 2013   ::  Friction between LA Unified and the state escalated today as Superintendent John Deasy lashed out against a new state rule that requires low-income parents to verify their economic status to insure that their children remain eligible for free or reduced-priced meals.

The state is asserting that failure to provide the proof on an annual basis will threaten allocation of Local Control Funding Formula support, in LA Unified’s case, as much as $200 million.

In a statement [FOLLOWS] released this afternoon by the district, Deasy challenged state officials to “walk with me through Florence-Firestone, Pacoima, and Watts — among the poorest neighborhoods served by L.A. Unified — for vivid evidence that this District serves thousands of students living in circumstances of abject poverty.”

He added: “I’m offended by his presumption that middle-class students are sneaking into schools in poor areas to reap the benefits of additional funding. As I’ve noted before, it’s profoundly disturbing that because of a unilateral change in the reporting procedure, the state is threatening to shortchange schools that serve our students in greatest need.”

At issue are more than 138,000 district students who attended nearly 400 high-poverty campuses, all of whom automatically qualify for subsidized lunches under federal rules that require parents to fill out paperwork only once every four years. By the new state rules, a district must submit written verification for each student each year.

Directing his remarks at Richard Zeiger, Chief Deputy Superintendent to California State Superintendent of Public Instruction, Deasy charged that contrary to “Zeiger’s statement that L.A. Unified wants to circumvent an unnecessary rule, we want to advocate strenuously for students who have been historically underserved, so that they can receive their fair share of support, as the governor intended.”

Decrying state budget cuts that have harmed the same students whom the the Local Control funds were meant to help, Deasy said, “I remain distressed that the fundamental purpose of the governor’s brilliant and courageous funding formula will be undercut and undermined through this process. I call on the CDE to partner with all districts to make providing much-needed revenue to our underserved youth easier, and not harder.” 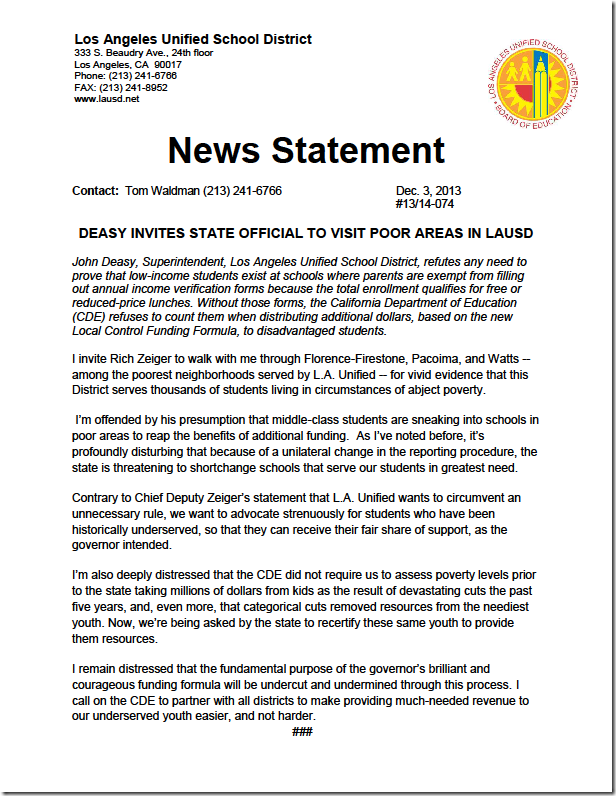