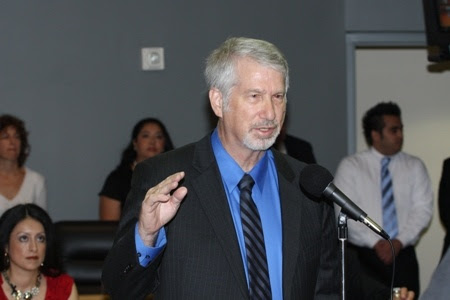 December 4th, 2013, 6:00am  ::  In September, Los Angeles Unified School Board members voted 5-2 to order district officials to produce a budget for the new arts education plan published last summer. That budget was expected to be released Tuesday at a public committee hearing that's now been rescheduled to Dec. 12.

Among those in favor of requiring administrators to produce an arts budget was district 5 board member Bennett Kayser, who represents Griffith Park east, South Gate and East Los Angeles. Kayser, a former L.A. Unified teacher, was elected to the school board in 2011.

The arts plan, which can be viewed online, and the yet-to-be-seen budget have been in the works since the board unanimously approved a measure to make the arts a core subject in Fall 2012.

Kayser sat down for an interview with KPCC in his downtown Los Angeles office about his views on arts education. Here are some edited highlights of that conversation.

The value of arts education for L.A. Unified students:

It lets the kids express themselves and help learn who they are and what their environment is like. I've been a supporter of the arts for a long time. My mother was an artist, my grandmother was an artist, my grandfather was the first curator and director of The Jewish Museum in New York and my wife is an artist. It must be in the genes because both of my sons are graphic artists as well.

Integrating arts instruction into other core subjects like math and history:

Integrating the arts into the coursework, I think, is an excellent idea. But art for the sake of being art is also just as important.

On the state of the district's new arts plan:

Heard very little about the arts plans lately. My most recent encounter with the arts program actually was with the music and going down to the central facility where the instruments are repaired and maintained to see several thousand instruments stacked on shelves along the walls and not being used, not being repaired. It's very sad.  Some of them just need a ten minute set of new pads on a saxophone. We could get those back in the hands of the kids, it'd be great.

Role of roving arts teachers in the district:

If there's continuity I think it works. When I was teaching I had traveling teachers and performers come to my class. The problem was that they would come for a couple of visits and then their schedules would change and we'd have projects and things that weren't done 100 percent. I found that frustrating.

We had an artist come in and show scientific illustration. We had dance teachers come in and teach the kids movement as a way of expressing themselves. I had classes in physical science where the kids had to figure out pyramids that they would stand in, supporting each other, to show how a volcano works.  It can be done and it's great when it is.

On what's missing in arts in schools:

There are several things I'd like to have happen and hopefully with the new budget, with Proposition 30 and the new funding formula, we'll be able to get back to some of those things. One of the arts programs that we've had in the past have been assemblies where performers, musicians, magicians, all sorts of artists would come and perform in front of the students in their school auditoriums. Those are pretty much history right now. I'm really anxious to see those things come back.

When I was teaching at Irving middle school, some other teachers and I used to take kids to the movies in Hollywood. Even though we were only about three and half miles away from the theaters in Hollywood many of the kids had never seen them before. We need to broaden their world and let them know that there's more out there than just hanging out.

On arts funding and why it's taking so long to get an arts budget:

I wish I knew the answer to that myself. We have a district arts plan and in that arts plan it says that as of last, I believe July 1st, we were supposed to have a budget and a strategic plan for incorporating the arts from the superintendent. That hasn't materialized yet. I'm anxious.

As we have a new budget period coming up, and we have a committee structure that we haven't had for many years to focus the board's attention more on these issues, I think it's more likely that we'll see the money than last year or the year before. I'm keeping my fingers crossed.

Who else should Pass/Fail interview about arts in school? Let us know. Email mplummer@kpcc.org or elarrubia@kpcc.org.