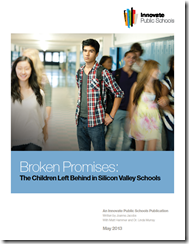 Posted:   12/09/2013 12:18:29 PM PST | Updated:   a day ago  ::  MOUNTAIN VIEW -- Silicon Valley public schools are largely failing poor students and English learners, a report issued Monday  in May asserts, indicating that even schools in wealthy neighborhoods perceived to be highly successful are inadequately preparing these students, considered the hardest to educate.

"Broken Promises: The Children Left Behind in Silicon Valley Schools" highlights two tiers of achievement, based on state test scores from 2012-13. Only 14 percent of English learners, 21 percent of African-American students, 24 percent of Latinos and 29 percent of low-income students tested proficient in algebra at the end of eighth grade. That's compared with 58 percent of white students and 80 percent of Asians.

Historically, those numbers carry over into high school, with huge gaps in college readiness.

"We've got a big problem in the valley for low-income kids and English-language learners," said Matt Hammer of Innovate Public Schools, the year-old nonprofit that published the report. At the same time, he said, the report found encouraging news. "There are some schools that are showing you can do amazing things and achieve high performance with kids in any of these subgroups."

Elementary schools doing the best for poor students, as measured by the state's Academic Performance Index, include some in districts serving high-needs students. At the top was Gilroy Prep Charter in Gilroy; Cornerstone Academy charter and Voices College-Bound charter, both in San Jose's Franklin-McKinley district; and McCollam in Alum Rock.

When evaluating schools with a majority enrollment of English learners and poor students, three of the four with the highest API were charters -- Gilroy Prep and three Rocketship schools. They were followed by four schools in the Alum Rock Union School District.

"From the perspective of a low-income Latino family looking for good schools, one of the best places to live is now Alum Rock," the report notes, "where there are high-quality charter schools and several of the top district-run schools in the region."

On the other hand, the report pointed out that in some middle-class areas, such as Sunnyvale and Berryessa, fewer than 10 percent of Latino students attain proficiency in algebra at the end of eighth grade.

Parents like Mayela Razo of San Jose welcomed the report pointing out the lack of high-quality education options in her neighborhood of Franklin-McKinley schools. After her two children attended an elementary charter school, she struggled to find an appropriate middle school -- and her older son languished in math class, repeating what he already had learned in fifth grade.

The report, which analyzed scores from public schools in Santa Clara and San Mateo counties, is the second edition issued by Innovate, the Mountain View nonprofit that seeks to accelerate improvement in public schools for poor and minority students.

Monday's report updated one issued in May and includes 2013 API scores, dissected by ethnicity and for low-income students and English learners.

However, while the report lists the lowest performers among schools in all 54 districts in the two counties, it limited its survey of high-performing schools to those with more concentrations of poor and Latino students and English learners. The lowest-scoring elementary schools, measured by the state's Academic Performance Index, for low-income students were Laurel in Menlo Park and Springer in Los Altos -- two of the highest-scoring elementary districts in the state.

But those figures are skewed by low numbers in both cases. Springer, for instance, had only 12 low-income students last year. Laurel had 11. "It's not comparing apples to apples," said Linda Creigton, Laurel's principal.

Because some Laurel students are taught solely in Spanish in primary grades, they have not fully transitioned to English teaching, she said, and as a K-3 school, Laurel doesn't benefit from the higher scores of upper-grade children. Districtwide, low-income children in both Los Altos and Menlo Park score much higher -- but still far below low-income students in the top-scoring elementary schools.

The full report, a waste of bandwidth, is here.