Despite the cost of a special election, L.A. Unified should let voters decide who should take her seat.

Editorial By The Times editorial board | http://lat.ms/1kvOfbT 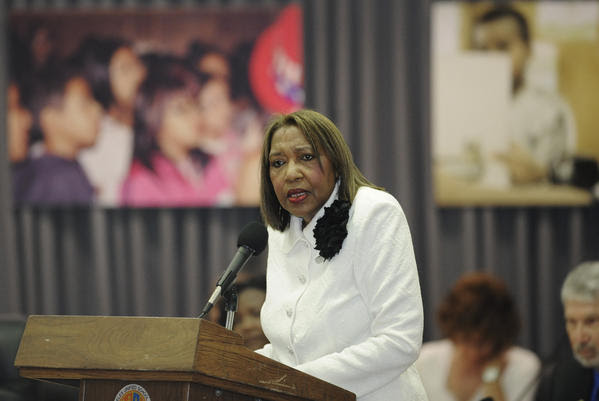 December 10, 2013  ::  The Los Angeles Unified school board has barely had time to mourn the loss of Marguerite Poindexter LaMotte; now it must decide how best to fill her seat.

LaMotte, a school board member since 2003, died last week at an education conference in San Diego. Under the law, the board may pick someone to represent her district until the next scheduled election in June 2015. Or it may hold a special election sooner than that. The first way would be faster and more efficient, while the second would cost several million dollars.

Nonetheless, the board should spring for an election.

LaMotte was a fierce champion of her district in the south and southwestern portions of L.A. Unified, an area with a particularly high concentration of disadvantaged black and Latino students. Voters there should now be given the opportunity to pick someone who will similarly represent their concerns and interests.

Of course, it's unclear how voters will interpret those concerns and interests. LaMotte took office in 2003, as the era of accountability under No Child Left Behind was just getting under way. She wasn't a fan of the change, or of many of the related reforms, such as the explosion of charter schools in the years that followed. A steadfast ally of United Teachers Los Angeles, she was one of the more implacable opponents of former Mayor Antonio Villaraigosa's education policies and, more recently, those of Superintendent John Deasy.

It's unclear how the political composition of the board would be affected by an appointment or an election. Right now, the board majority's views fall somewhere between LaMotte's anti-reform stance and Deasy's unwaveringly pro-reform agenda; that would probably be reflected in any appointment. In an election, LaMotte's constituency might remain loyal to her anti-reform legacy — and undoubtedly UTLA would throw money behind an anti-reform candidate — but it's also likely that powerful and moneyed people such as Eli Broad and Michael Bloomberg would contribute heavily to a pro-reform candidate.

The most important consideration at the moment should not be the board's future makeup, but ensuring that the voters of District 1 are represented by the board member of their choice. That's why an election makes the most sense. After all, the other members of the board were all elected by their respective districts; the voters in LaMotte's district didn't choose them and aren't represented by them. So why should they get to select her replacement?

Because incumbents are seldom turned out of office in L.A. Unified, the person who takes in LaMotte's seat will almost certainly be there for many years. That person should be someone who truly represents the the voters of her district.