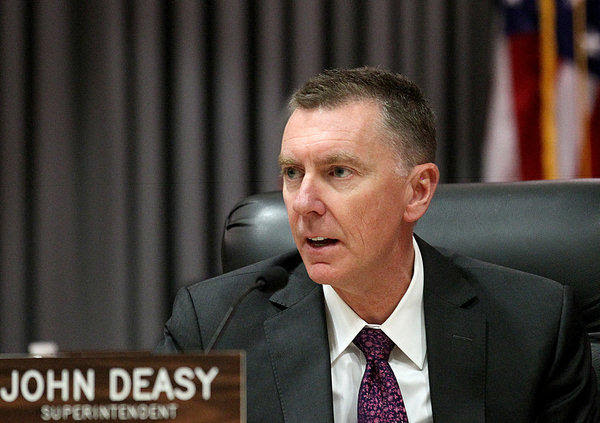 December 22, 2013, 6:05 p.m.  ::  L.A. Unified is improving faster — in some categories much faster — than most other large, urban school systems, according to the latest results of the National Assessment of Educational Progress, which tests a sample of students nationwide.

And while the district's overall scores remained relatively low, its progress elicited praise from U.S. Secretary of Education Arne Duncan.

Los Angeles is among the school systems that are "examples for the rest of the country of what can happen when schools embrace innovative reforms," Duncan said.

Of the 21 urban districts that took part in the 2013 assessment, L.A. Unified achieved the highest gains over two years on fourth-grade reading scores for African American students, white students and those from low-income families, according to a district analysis.

Only students in fourth and eighth grade were tested.

The federally funded National Assessment is given to a scientific sample of students and is considered more difficult than most state standardized tests.

While it does not test all students or produce results used to gauge the success of schools and teachers, the assessment does provide an opportunity to compare districts and states. Massachusetts, for example, has fared relatively well, while California has not.

The National Assessment is "the gold standard," L.A. schools Supt. John Deasy said. Yet, like other standardized tests, it has sparked debate.

That could foreshadow how students will perform on new exams tied to the Common Core learning standards, which are intended to result in more rigorous and relevant curriculum, that most states will soon be using. Officials across the country have expressed concerns about having to respond to lower test scores, more akin to those on the National Assessment.

While the factors contributing to higher scores are impossible to ascertain exactly, Duncan credited L.A. Unified with transforming how it recruits, trains and retains talented teachers and principals.

Deasy has been a proponent of more demanding teaching standards. For example, he has insisted on dismissing greater numbers of teachers before they receive tenure protections.

Some of Deasy's efforts have been controversial, including linking test scores to teacher evaluations — an approach just getting underway.

Recent surveys suggest the superintendent is unpopular with rank-and-file teachers, but Duncan gave him credit for challenging the "status quo." Like Deasy, Duncan has been a target for those who criticize the current direction of school reform.

The National Assessment scores, Duncan said, "suggest that the ambitious, courageous and sometimes controversial reforms undertaken [in L.A.] …are working for the children they seek to serve."

Last week the District released these results with no fanfare. The Times Editorial Board and 4LAKids recognized the incremental gains as fairly meaningless and indicative of nothing. But test score reporting is like Chinese plate juggling; if it’s just laying there you spin it.