Hopefully, you’ve never picked up the telephone and felt the hair stand up on the back of your neck as you realized who was on the phone and what they were talking about, felt your heart empty out and felt dread and despair flooding in.  I have, twice.  The first time, it was my ex-husband.  The second time, it was the United Way of Los Angeles.  I phoned into a conference call that wasn’t what I expected, and it ended my relationships with the Partnership for Los Angeles Schools, Teachers for a New Unionism and Educators for Excellence, and put some others in the doghouse.  The call confirmed some of the most discouraging talk I’d heard or read, and some of my most disappointing experiences.  After what I heard, I couldn’t stay any longer. 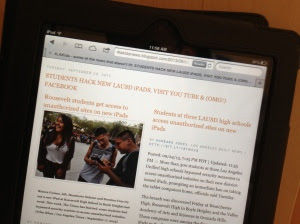 We’ve had a hard time with education reform in Los Angeles, and with a broken relationship between LAUSD and UTLA; what happened this fall just made it all worse.  Early in the school year, LAUSD began implementing a plan to provide iPads to every student in the district, and distributed the devices at 47 schools.  Students at Roosevelt High School in Boyle Heights quickly figured out how to overcome security filters that blocked social media sites, and the rollout had issues at two other schools. The iPads were quickly recalled and the bumbling start of the iPad program made national headlines in late September and early October.  The school board soon erupted in a fit of 20-20 hindsight that was not improved by subsequent emergency meetings.  All of this is chronicled in the press, but I mention it to set the stage for a little feint that John Deasy pulled on October 24, 2013, right after the iPad scandal and right before he was going to be called in for his own job evaluation. It was the last straw.  Although I had publicly stuck up for him after a UTLA poll of 16,000 educators rendered a 91% “no confidence” vote, I lost all faith in him with the iPad situation, and had to face some very hard realities about reform groups in LA.

The United Way does wonderful things in Los Angeles, with a focus on ameliorating poverty and keeping local activists and educators informed and engaged.  I am currently serving on an advisory team for a holiday educator-recognition event sponsored by United Way (I gave my word).  I was honored to be a panelist with Warren Fletcher (president of UTLA), Judy Perez (president of Associated Administrators of Los Angeles) and Evan Stone (CEO of Educators 4 Excellence) at an event sponsored by the United Way earlier this year.  On this fateful day, I had asked to be included in a conference call the United Way was sponsoring to discuss the state’s Local Control Funding Formula.  When I called in, I heard a roll call of 51 educational, community or political groups whose sole purpose on the call was to support John Deasy in his fight to keep his job.  The news that Deasy was threatening to quit had changed the topic and galvanized the group.  These good people were planning to skip school to show support at the October 29 Board meeting.  They were bringing students and teachers to testify in his favor.

I was… flabbergasted.  I didn’t have the heart to even make the roll call.  By the time they got to “anyone else?” I was too intimidated and overwhelmed to say, “Here.”  I didn’t know what affiliation to claim.

Long story short, these folks made a huge showing outside the morning Board meeting, while 35,000 union members were busy serving the needs of our youth.  It was a much needed wake-up call.  I began to realize the extent of the ignorance and hubris that fuels many ed-reform decisions, as well as the extent of my own ignorance.  The addition of businessmen and socialites to a board I sat on made sense suddenly, as did their posturing and pronouncements. If you’ve ever heard people mis-speaking about things you know intimately, or talking about you when they thought you weren’t listening, you know how pained I was and still am.  I couldn’t speak then and have just found the words, now.

Some of the groups in the pro-Deasy rally  - Students First, Green Dot, KIPP LA – were to be expected, although they have no business in LAUSD’s superintendent evaluation.  Others made me gag in wonder – Goodwill of Southern California?  Inner-City Struggle? LA Education Partnership?  I thought we were friends!

They weren’t talking about me, personally, but they clearly saw themselves as supporting their hero, a hero whose arch-enemy is my union, UTLA.  It was, and is, very difficult to understand why they need to draw a protective circle in the sand around John Deasy.  (Speculation is rampant, but facts are hard to come by).  The bottom line for me personally is that there are too many good people distracted by too many superfluous groups.  The best place for an educator to protect and promote public education is the teachers’ union.  Over time, for better or for worse, the union is the educators’ bastion and it is set up via a democratic process in which any member can participate.  If UTLA needs to be more positive and professional, we need to make it that way ourselves, but that’s another story.

What do these people want, for our youth, really?  School choice is a wonderful thing for those of us who actively choose – but we all have the sacred obligation to provide a quality public education for all children.  This means I could get my own daughter into a magnet school by filling out the applications, kissing principal butt, following through with phone calls and then getting her to the bus stop at oh-dark-thirty; I did that.  But I still have a very real obligation to the kids down the street to make sure that our neighborhood school is fully staffed and resourced, and functioning with district support. 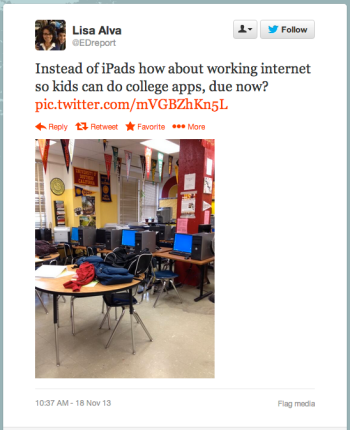 That’s why I phone banked and voted for Prop 30 and am very upset this money is being co-opted for tech toys.  My own school badly needs campus aides for safety, reliable internet access to promote equity on the battered old computers we still have, a reading program to ameliorate the effects of poverty and social promotion, and professionals to care for the kids’ out-of-the-classroom needs.  What do the 51 groups think is more important?

The question is how to get these 51 groups to share their goals and concerns with UTLA.  How did 35,000 teachers alienate these well-intended groups? How can we get on the same page?  Help me, United Way.  Help us, Warren Fletcher and Eric Garcetti, and all you Board of Education members and everyone else with power, please.  Can you have a change of heart?  I can.

This is the story of a broken romance.  I love knowing the passionate, intelligent individuals I’ve met in the reform arena.  I want to go out for drinks as friends.  As professionals, I want to hash out our differences for the sake of the left-behind kids and schools, like mine.  Is this a case of irreconcilable differences?   Or am I kidding myself and need to move on?

Lisa Alva Wood is a Los Angeles teacher who was working with school reformers at the same time she belonged to the United Teachers Los Angeles, a union that has been a target of those same reformers. In this post, she tells the story of how a single phone call caused her to fall out of love with school reform.

I was on that same phone call with Ms. Wood; what she recounts is true.

When they called the name of the organization I was representing at their roll call  I did not answer as being present because :

A. I  was not representing them in any official capacity and

B: I recognized that by answering present my organization would automatically be included as a supporter.  And we weren’t.

And  C. to be honest I suspect they called our name to make sure we weren’t there!  (My strategy is called “lurking” when it’s not being called “Opposition Research”.)

When Antonio Villaraigosa became Mayor Tony he recreated the United Way of Greater Los Angeles into a political organization in his own image. It was no longer the charity that supported The Salvation Army and Easter Seals and the Boys and Girls Clubs – and PTA Health Clinics.  It became a political machine delivering his vision and supporting his causes.

The Call was organized around the “OMG: The Sky Is Falling” theory of community organizing (“Deasy is Leaving!”) and the unusual suspects aligned themselves with Chicken Little The United Way of Greater L.A.  in characteristic panic – forming  an off-the-Ollie-North-shelf  group called the Coalition to Save Los Angeles Schools (CLASS). The acronym for the Coalition to Save John Deasy’s Job wasn’t as cool.

Of the 51 Organizations subsequently named in a blizzard of CLASS broadsides and  press releases a few quickly disavowed their membership and there was a series of emailed apologies sent to the offended organizations …they had been included in a mistaken abundance of enthusiasm. But, as even I have been known to say:  It’s often easier to beg forgiveness afterwards than ask permission at the time.

And, after all, the “groundswell of support” from the Astroturf grassroots had it’s desired effect: John Deasy, like a headliner who was going to do an encore no matter how mediocre the show was, was encouraged to stay!