AFTER MARGUERITE LAMOTTE’S DEATH, LAUSD MELTS DOWN YET AGAIN 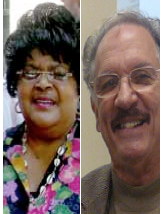 George McKenna III – Left
20 Dec 2013-The death of Board member Marguerite Poindexter LaMotte was not the thing that made the Los Angeles Unified School District go wall-to-wall ninnyhammer for the holidays.  No, our billions blowing, low performing, gerrymander-dominated, million-megaton District was already a basket case long before the African American and UTLA-friendly Board stalwart suddenly passed in San Diego at age 80 on December 5.

The thing that made our lumpenproletariat leviathan weigh all nuclear options simultaneously was the fact that LaMotte died at a time when nobody has any control of anything. The untimely death comes when it may or may not make sense to fill her seat with a caretaker appointment, a special election, some combination, or by waiting a long sixteen months until her seat comes up again for election.  And nobody--not the Superintendent, not the Board, not the Mayor, not the union, not the teachers--have the authority to make an immediate decision.

So as LaMotte ascends the Pearly Gates, the decision about how to replace her lingers for an unknown duration precisely where so many students and teachers and staffers have lingered for so many years: in LAUSD Board Purgatory.

In a District in which paranoia strikes not only deep, but strikes daily, fervently, as expensively as possible, and typically takes no prisoners--leaving nearly everyone who says anything at all about it looking extremely silly--even the slightest vacancy or change dependably drives the those with twitchy fingers to fire before aiming.

But this was indeed an extraordinary situation, a death on the very cusp of entering an uncertain election cycle, and of a Board member who is a key cog not only in LA's black community but also on behalf of its top teacher's union.  Thus, all stakeholders were only too willing to lock and load immediately.

Even well before the body had been interred, District corporatists--some of the same corporatists who brought the District the billion dollar iPad boondoggle--nominated a uniquely authoritarian guy for the only African American dominated district in the LAUSD: George McKenna III, a longstanding controversial District figure.

When McKenna's name was thus floated for something other than another African American oral history interview, various UTLA members floated and even flaunted their own persistently spilling outrage at the thought.


"One of the happiest days of my life, after the birth of my son and my wedding day, was the day I transferred out of Washington Prep. to spend the next 23 years at Huntington Park High School," one such letter began. "Leaving George McKenna and that awful school behind, did wonders for my outlook on life. His Gestapo agents were everywhere spying on the faculty. God, what a dictator of a self-aggrandizing megalomaniac! Please, no more McKenna. By the way, encourage all your friends to quit subscribing to the LA Times as soon as possible. The sooner we can give that rag a dirt nap, the better."

I'm all for the latter concept, even if precisely which LA Times should take a dirt nap remains difficult to parse. Is it the LA Times that editorialized in favor of holding elections? Or the LA Times that published a plaintive wheeze from two ex board members, infra-liberals by way of Berkeley, David Tokofsky and Jackie Goldberg, admonishing the District to appoint rather than special elect?

"How hard is teaching? All you have to do stand up there, open a book, and read. How hard is that?" another outraged teacher quoted McKenna as telling teachers and other staffers in another bygone meeting. That doesn't sound like either education or democracy to me.

"These are quotes that he would stand up and say in front of our staff meetings. He consistently disregarded us and the opinions of our staff. He implied that because teaching was so easy that he could just bring anybody in to replace us. Every time he came to a Fremont meeting, he berated us and told us that we were trying to blame test scores on the fact that our students were from low economic families."

Trying to learn a little more, even as some teachers were generous with their bilious appraisals of McKenna and the Board, as usual the UTLA's media office was most useless of all to me. They offered no position nor even any information whatsoever.  They instead wondered if I would be at the Board meeting.  They also wondered if I had listened to Warren's show. (Warren who?) In short, they threw everything back at me, as though I was a dangerous spy from some other side (which other side?) for actually having a few questions about what they might be thinking.  I have been to enough LAUSD Board meetings and listened to enough Warren to know that if you want empty viewpoints, empty talking points and loads of empty bullet points by the barrel-full, these outposts are for you.

I did learn that most UTLA leadership favor the appointment of Jimmie Woods-Gray, if she's available--she's presently a City of LA Fire commissioner, a Garcetti counterweight to his absurd appointment of under-educated Parent Revolution factotum Lydia Grant to the EmpowerLA commission.  "She's excellent.  I've worked with her for years.  Intelligent, fair, politically involved in the best sense of the word," was the most representative sample of the way Woods-Gray was described to me by UTLA rank and file.  Garcetti had appointed Woods-Gray to the LAUSD redistricting commission in 2011--where Woods-Gray worked towards preserving District 1's African American legacy, something increasingly difficult to do given the way the region's demographics are panning out from Census to Census.

The Board when it met only resolved not to resolve anything at all until next month, the kind of non-decisiveness that has made the District the bloated pig it is.  Monica Garcia issued a statement: "I look forward to a healthy discussion befitting Ms. LaMotte’s legacy and the District’s leadership when the Board of Education meets on January 7, 2014.  The children and families of District 1 and the greater LAUSD deserve no less."

"Deserve no less" is one of those phrases.  Nobody, neither the Board nor the UTLA nor Superintendent Deasy nor the deceased Poindexter LaMotte, thought much of the children and families of LAUSD deserving fundamental rights such as freedom from classroom misconduct until the Miramonte scandal brought the District to fire 127 teachers and accept the resignations of 110 more since February of last year. More decisiveness earlier could have helped the many, many victims.

I have to confess that the way LAUSD can blow money so remorselessly on everything from iPads to half-billion dollar new schools to Astroturf, the idea of it worrying about the cost of a special election is a challenging and unbelievable one to me.  The students of District 1 deserved "no less" than a delayed decision in which indecision ruled the day about as much as they deserve Monica Garcia telling them what else they deserve after failing them for so long.

Stand up, someone. Quit trying to game it your way--let the people game it their way.  Let's let democracy work: let's have an election, and sooner rather than later.