THOUSANDS OF CHILDREN COULD LOSE HEAD START SERVICES UNDER SEQUESTRATION 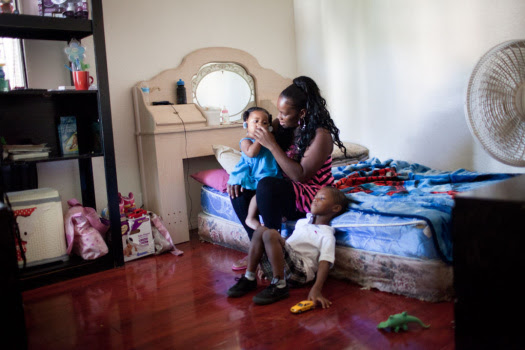 Mae Ryan/KPCC - Harvesha Knight plays with her children Darniyah Davis and Darryl Jr. Davis. Harvesha is pursuing her nursing degree, but in August last year had to put off school because her local Head Start preschool didn't open its doors at the start of the school year. Might her son's program be affected again if Sequestration goes into effect?

February 21st, 2013, 6:00am  ::  Just one week after promising to inject funds into early childhood education in his State of the Union address, President Obama is warning that the Head Start program will instead face cuts if lawmakers fail to reach a compromise over the budget.

“We’re estimating that, statewide, sequestration would amount in 6,000 children being cut from head start services,” said Rick Mockler, Executive Director of the California Head Start Association. He said families that rely on the program for childcare and other services could lose that help overnight.

“Head start children are the most vulnerable children in the state of California," Mockler added. "They come from the absolute poorest families."

Congress has until March 1 to reach a deal to avoid automatic across-the-board spending cuts.

Head Start funds come from Washington and are funneled through large local agencies that pick which programs and pre-school centers to support.

“We don’t really know what it means for us at this stage,” said Kostas Kalaitzidis, a spokesman for the county office of education. He called it a “very complicated affair.”

The Child Care Resource Center is already cutting back on expenses to prepare for the worst. The center operates 18 Head Start centers serving 1,500 children in the San Fernando, Santa Clarita and the Antelope valleys. Its president and CEO, Michael Olenick, expects a $300,000 cut between March and June should sequestration go into effect.

The Child Care Resource Center has already lost 20 percent of its operating budget over the last two years due to statewide budget cuts to early childhood programs.

The lack of certainty about whether more cuts are around the corner is hard on his staff and parents who use the center's services.

“What makes it so difficult is that it's hard to know whether to believe it or not, given that the last two fiscal crises have been overcome," Olenick said. "So is it really going to happen or is this just another fire-drill?”