The mechanics vocational school had been facing closure or relocation after 40 years at Van Nuys Airport because of budget cuts and a rent increase. The gift will keep it going at least a year. 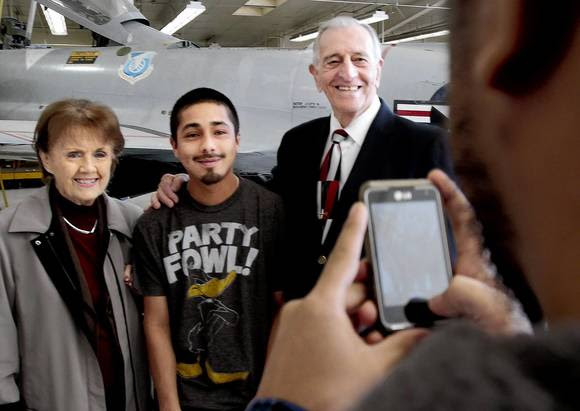 Isac Ramos, 23, center, poses with Betty and Si Robin after a news conference to announce that the owners of Sensor Systems, which makes aircraft antenna, will donate $100,000 to the Aviation Center. Ramos will soon graduate from the two-year program. (Anne Cusack, Los Angeles Times / February 11, 2013)

Single-engine Cessnas and a former Coast Guard HH-52 helicopter will continue to line one of the most unique classrooms within the Los Angeles Unified School District, thanks to a $100,000 donation announced Monday.

The North Valley Occupational Center-Aviation Center had been facing closure or relocation after 40 years at Van Nuys Airport because of budget cuts and a rent increase.

In recent weeks, the vocational school — which has produced thousands of mechanics — gained some high-powered backers, including L.A. Councilman and mayoral candidate Eric Garcetti.

Now the owners of the largest aircraft antenna manufacturer in the United States have contributed $100,000 to keep the center in place for at least another year while district officials negotiate a new lease with Los Angeles World Airports. The current rent is about $12,000 a month.

"This center is very important to our family, our business and our community," said Si Robin, owner and chairman of Sensor Systems Inc., who along with his wife made the donation to the school. "We make every antenna on every plane in these hangars, but the students are the ones who keep the airplanes running."

The center has about 75 students enrolled in the two-year course — nearly half of what it had before budget cuts eliminated night classes — and prepares students for Federal Aviation Administration certification.

"It's one of the diamonds of the [Career Technical Education] program," said Andres Ameigeiras, an administrator of L.A. Unified's Adult and Technical Career Division. "There's nothing like being hands-on in your own airport."

The program allows students to get real-life experience while being exposed to the job opportunities waiting for them upon graduation, Martinez said.

Jorge Arteaga is one of those students. His interest in aerospace science was piqued when he participated in Canoga Park High School's Air Force ROTC program, but he wasn't interested in pursuing a college degree.

"You can do a lot in today's world with a vocational degree," the 21-year-old said. "But counselors don't mention trade schools."

The donation will allow Arteaga to finish the program this spring at the airport, where students can run powerful engines and taxi planes — something they wouldn't be able to do in a regular school setting.

"That noise is fairly common here," instructor Michael Phillips said. "We wouldn't be able to do much of that anywhere else because of the sound complaints."

The aviation industry is suffering from a shortage of qualified, entry-level mechanics, Phillips said. And at $2,400, the program is one of the few that can offer students an affordable career path.

"Our first-time pass rate for the FAA certification exam is at 94%," Phillips said. "There are other good programs in the area, but this one is premier."

If a proposed $1-a-year lease is accepted by Los Angeles World Airports, the aviation industry would be the better for it, Cardenas said.

Without such specialized and technical education, "we might see the artificial collapse of an industry because it doesn't have the support it needs to thrive," Cardenas said.

Si Robin of Woodland Hills presented a check for $100,000 to... (David Crane/Staff Photographer)

2/11/2013 07:22:26 PM PST - VAN NUYS - An embattled mechanics school at Van Nuys Airport got a supercharged boost on Monday with a major gift from a San Fernando Valley aviation firm.

He joins a growing number of advocates hoping to save the vaunted adult training program threatened by budget cuts, rising airport rents and federal red tape.

"I couldn't do it for any other industry," said Si Robin, who runs one of the world's leading suppliers of aircraft antennas, before a news conference at the North Valley Occupational Center hangar. "Especially for young people who are leaving to pull themselves up by their bootstraps.

"To keep this school going - it's probably the most important school in the aviation industry."

For 40 years, the mechanics school now just west of the main runway has trained students in airframe and powerplant operation.

And nearly all grads land jobs paying up to $25 an hour building or fixing private, commercial and military aircraft, including many at Van Nuys Airport.

For months, however, city officials have teamed up with airport officials and local businesses to try to salvage the popular program that costs $500,000 a year to run.

The Los Angeles Unified School District had threatened to close its mechanics school because its monthly rent at Van Nuys Airport was slated to double to $12,000 in July.

Los Angeles World Airports, in turn, offered to drop the rent to $1 a month for 15 years.

But that was only if the Federal Aviation Administration, which oversees airport uses, lets LAWA cut a deal for nearly free rent. So far, the FAA hasn't responded to numerous requests to help save the school.

"The FAA needs to approve this paperwork quickly so that LAWA can approve the lease."

Across the mechanics school, more than 100 students who paid $1,000 for tuition gathered round vintage engines, helicopters and fighter jets.

"There's getting to be a real shortage in mechanics and aircraft technicians," said airport businessman Clay Lacy of the Van Nuys Airport Association. "The thing that's great about this

Issac Ramos, 23, looks over jet electronics at LAUSD s Aviation Mechanic's School at Van Nuys Airport. Ramos is about to graduate from the school, which received a $100,000 donation on Monday, Feb. 11, 2013 from Si and Betty Robin of Woodland Hills. (David Crane/Staff Photographer)

school: everyone who graduates gets a job. I hire `em."

One of those students was Jose Munguia, who will soon graduate. While working at the airport, he once fueled up Si Robin's Beechcraft Staggerwing biplane.

"I hope to wrench (soon) on the big birds, any passenger aircraft," he continued.

"The school has meant so much: a better life for me and my family."

It was 1951 that Si Robin, a native of the Bronx, began flying out of Van Nuys Airport. Since then, he and Betty built Sensor Systems into a 300-employee firm, making 1,100 antennas a day for the likes of Airbus, Boeing and Northrup Grumman.

On Monday, he marveled at the 1949 Bell helicopter now worth $400,000, he said, or the Korean War-era U.S. Air Force T-33 fighter now valued at $2 million. Across the hangar, a bay door opened to the airport roar of commercial jets.

"You see how nice this place is?," said Robin, a vintage race car driver, beaming to his wife Betty. "This is a place of learning.

"This is one place you cannot lose."