GPA CAN BE CONTAGIOUS AMONG HIGH SCHOOL STUDENTS, STUDY FINDS

smf: The headline above shows what happens when the data-driven operate on cruise control – and I’m sure the student authors (“Scholars”)  of the report would correct the headline editor. 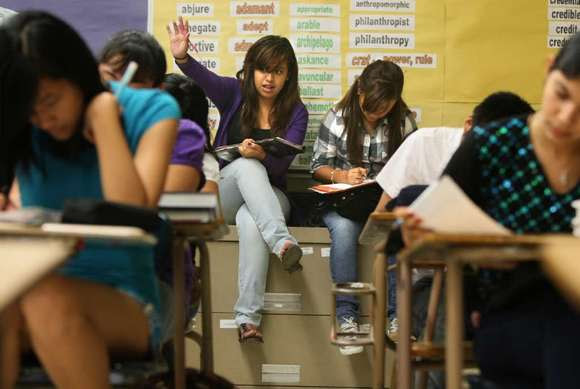 High school students' grades were strongly influenced by the grades of the friends in their social networks, a study has found. (Don Bartletti / Los Angeles Times)

February 13, 2013, 3:50 p.m.  ::  Researchers have some new advice for high school students who want to improve their grades: Become friends with academically oriented classmates.

It may sound obvious, but researchers went to considerable effort to prove it.

They surveyed all members of the junior class at Maine-Endwell High School in Endwell, N.Y., and asked students to rate each of their classmates as either a “best friend,” a “friend,” an “acquaintance” or someone they didn’t know. They got responses from 92% of students and used them to reconstruct the social networks among 158 11th-graders as of Jan. 11, 2011.

The research team also obtained the grade point averages for all 158 students in January 2011 and January 2012, so they could track how their academic performance changed over time. For the analysis, those GPAs were converted into class rankings. Then they compared the rankings of each student to those of their best friends, friends and acquaintances.

Sure enough, the researchers found a linear relationship between a student’s grades and the academic environment of their social network. If a student’s class ranking at the start of the study was higher than usual for her social network, it tended to fall over the course of the year. Conversely, if a student ranked below the rest of her group, her class ranking tended to rise.

The most significant influence appeared to be the grades of those labeled as “friends.” To explain this, the researchers hypothesized that the grades of “best friends” made little difference in the equation because they were probably very similar to start with. But the gaps between students and their “friends” were bigger, so there was more opportunity for influence.

The findings were published Wednesday in the journal PLOS ONE. The results are in line with other studies showing that happiness, obesity and other traits can spread through social networks.

Of note: Six of the study authors are students at Maine-Endwell high. The senior author is Hiroki Sayama, director of the Collective Dynamics of Complex Systems research group at Binghamton University in Binghamton, N.Y.

You can read the study online here.

Spread of Academic Success in a High School Social Network by